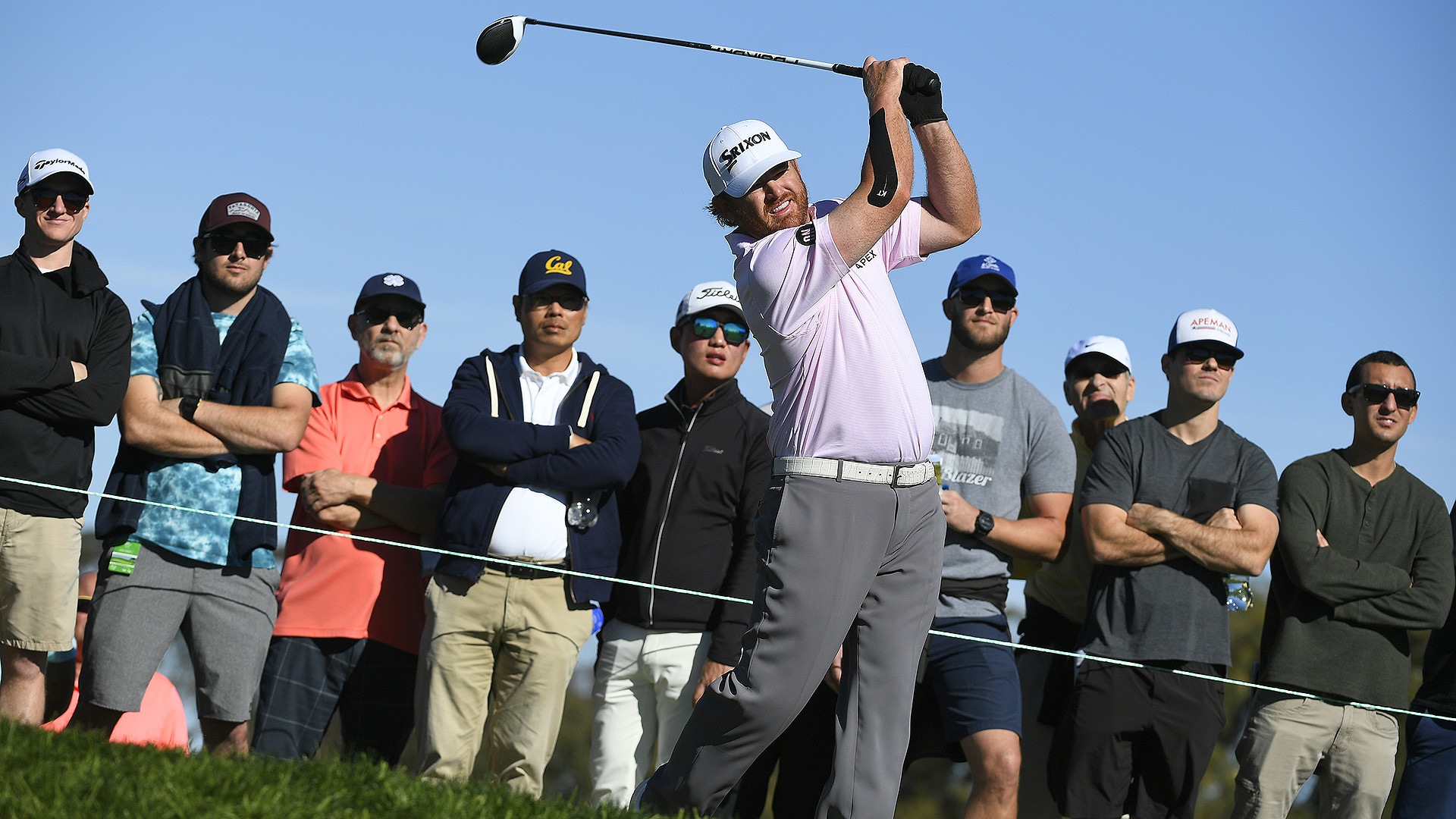 In this week's Rosaforte Report: J.B. Holmes responds to criticism of his final-hole approach at Torrey Pines, Jason Day discusses a huge victory, we get to know a little more about the most unknown man in the OWGR top 20, and Brittany Lincicome talks about night golf.

Two days later, there is more commentary about J.B. Holmes’ slow play than there is Jason Day’s first PGA Tour victory in a year-and-a-half, which I get. Four minutes and change is way too long to hit a shot – even with the wind gusting on the 72nd hole of a tournament.

I talked to Holmes on Monday, and he told me he didn’t realize how long it was taking for him to play an approach shot into the 18th hole during Sunday’s final round of the Farmers Insurance Open. He apologized to playing partner Alex Noren but defended himself and offered explanation as to why it took so long to play the shot that lit up Twitter by his peers.

Watching the replay, it looked like Holmes had zoned out.

“I didn’t realize how long it was taking,” he said. “We (Holmes and caddie Brendan Parsons) were just trying to make the best decision to play.”

In other words, Holmes was waiting for the gusts to die down, so he could take the head cover off a 5-wood he didn’t trust, and play a shot to the green. Ultimately, he hit a poor wedge shot and made par to finish fourth.

“If it bothered Alex, he could have said something and he could have hit,” Holmes said. “If I messed him up, I apologize. He still made a good swing. He smoked it. (Hitting 3-wood over the green and through the tunnel, next to the CBS booth.) I don’t understand what the big hoopla is all about. I was just trying to give myself the best chance to win the tournament. I didn’t want to mess anybody up.”

What messed up Holmes is that he hammered a drive, but with his cut and a crosswind, the ball ended up traveling 296 yards instead of the 330 yards he expected. This left 235 yards to carry the water, 240 to the flag. With the conditions, he felt like a career 5-wood was the play, but he lacked trust, which added to the indecision.

Ryan Palmer, the third player in the group, had already laid up with a wedge. He and caddie James Edmonson could hear the gallery get restless, but were more amused than bothered by the delay. “We kind of giggled at times,” Palmer said.

Most didn’t take it as being funny. Mark Calcavecchia called it horrendous sportsmanship to Noren and Palmer. Daniel Berger, Luke Donald, Ken Duke and Steve Elkington weighed in.

And that “something” should have come from a Tour official. There were no statements released by the PGA Tour and no response when I reached out late Monday afternoon.

Even though the final group took 6 hours to complete their round, they weren’t put on the clock all day – and had consistently been waiting to hit shots – a reason why Tour officials would not have approached them in the 18th fairway.

Holmes, who had a reputation for being a slow player, feels like he’s changed that habit, and doesn’t want to be incriminated.

“I used to be slow. I’d agree with that,” he said. “But it’s been years and I’m not slow any more. I don’t get timed more than anybody else.”

A New Day for Jason

Jason Day couldn’t sleep on Sunday night. Even after a full day of golf at Torrey Pines that included five playoff holes, the 30-year-old Australian couldn’t quiet his mind. Shows you how much pressure he was under, on many fronts.

There was much at stake for Day on Monday morning in the Farmers Insurance Open. A win would be his first since the 2016 Players Championship, and signal that he’s serious about regaining the No. 1 ranking that he held for 51 straight weeks.

There was also the ongoing issue of his back. Unable to bend down and hit a golf shot, Day revealed he had an MRI during his stay at The Vintage Club to get ready for the California swing, and while it came back negative, the tinge of pain was enough to withdraw from the Farmers pro-am.

“The back’s OK,” Day said after shooting 64 on the North Course in the second round of the tournament. “I mean, it’s just sore. I just have to deal with it. It is what it is.”

Day would be the first to say he’s been injury prone, with various wrist and thumb ailments that have cost him playing time and competitive traction. None of them was potentially career ending. He seems more concerned about a bulging disc or the facet joints that that MRI showed were getting closer to his nerves.

“It’s hard to get it off my mind,” Day said of the injuries that keep popping up.

Power lifting has been Day’s way to strengthen the muscles around his back. In a Q&A he did for Men’s Fitness, Day explained that the power lifting he’s been doing focuses on his legs and core. “I do a lot of squats, do a lot trap-bar deadlifts and a lot of sumo deadlifts. You can’t get too big.”

With the speed back in his golf swing, Day admitted he felt different this year than last year, that a year ago he felt mentally stressed, rundown and burned out.

In this country, Alex Noren may be the most unrecognized top-20 player in the world. But with all the TV time the Swede earned in the gloaming of Sunday night’s five-hole playoff with Day at Torrey Pines, Noren experienced a breakthrough moment at 35.

“I’m pretty realistic about it,” Noren told me last year in Abu Dhabi. “If somebody says you’re unknown, it doesn’t really matter to me that much. Maybe that’s why you keep trying.”

Tendinitis on both wrists, along with blisters and callouses on his hands, are signs that Noren has been guilty of trying too hard. Having a family has brought out his best golf. “I think Alex found a very good balance in his life with other things to occupy his mind,” offers European Ryder Cup captain Thomas Bjorn.

Bjorn seemed to be blessing Noren after his win in last year’s BMW PGA Championship, posting a Tweet that said, “A 62 final round on the West course to win @BMWPGA is beyond impressive! Congrats @Alex_Noren quickly turning into one of the world’s best!”

In America, where he played college golf at Oklahoma State, Noren is best known at The Bears Club, where he practices during the winter months, absorbing the advice of Jack Nicklaus and watching Rory McIlroy crush balls. As Noren told me for a column I wrote last year, “If I was hitting it like Rory, I wouldn’t have these callouses.”

So where does he go from here? To Scottsdale, Ariz., for the Waste Management Phoenix Open, with his family in tow. “I came over here to try to play these golf courses and try to get used to playing against these guys,” he said before leaving Torrey Pines. “I learned a lot and played probably best ever tee to green for me, so it’s big; it’s big for me.”

Lincicome’s Shots in the Dark

It wasn’t just Day and Noren playing great golf in the dark on Sunday night. Brittany Lincicome experienced the same type of lighting closing out the Pure Silk Bahamas LPGA Championship and finished birdie-birdie for her eighth career win.

Lincicome went over it on Monday, explaining that it was a little different than the nine-hole, night-golf, glow-ball contests that she plays with Angela Stanford.

“It couldn’t have been more stressful,” Lincicome said.

With no leaderboards, Lincicome was praying that she was only fighting against the players in her group. Pumped up with adrenaline, her drive at 18 left an awkward yardage from a divot. Luckily she had been practicing half-wedge shots.

“It helped, for sure,” Lincicome said. “In a divot, last hole, under pressure with no lights wasn’t where I wanted to be. I hit one of the best shots I’ve ever hit in my life.”