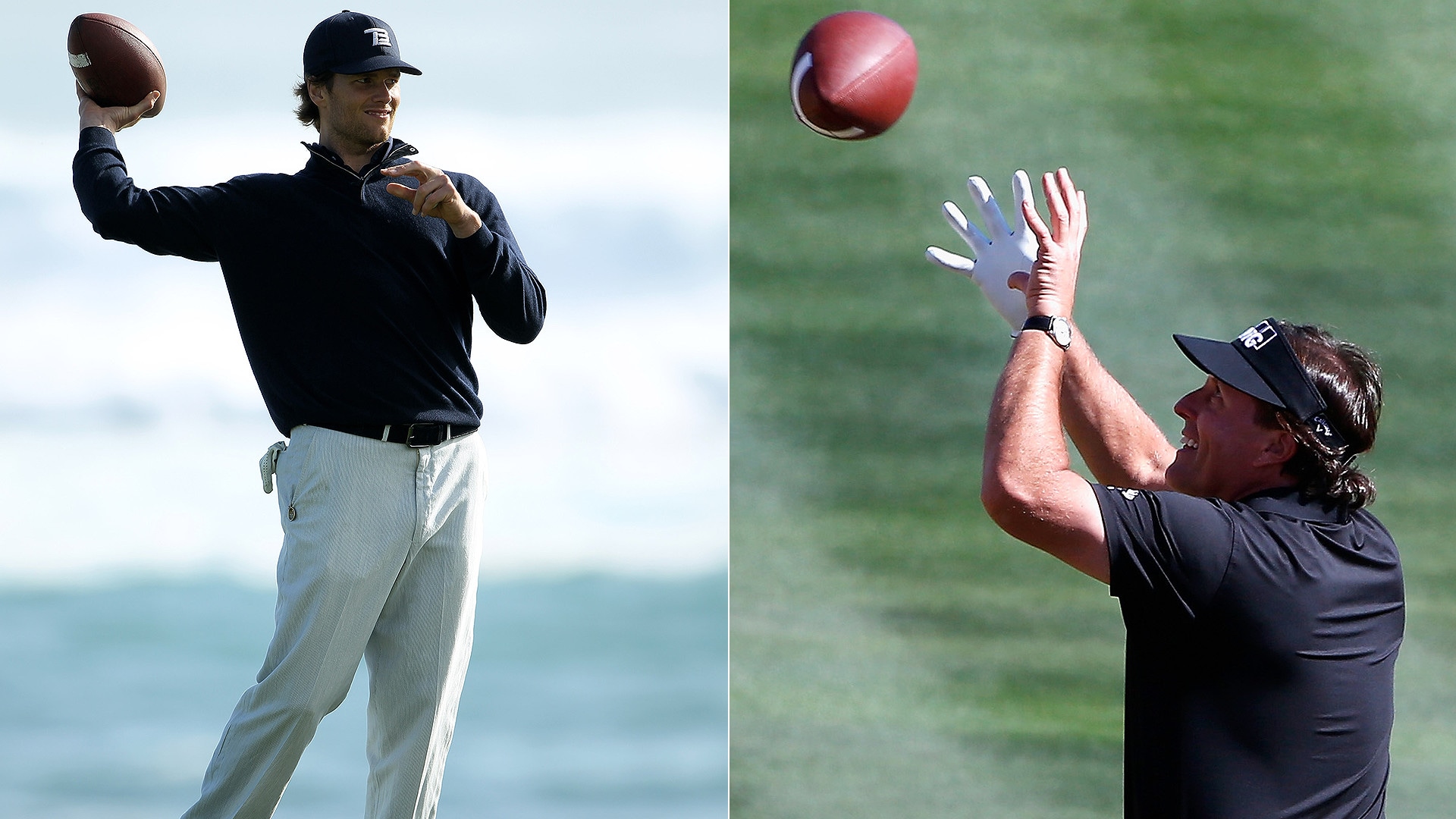 Jimmy Dunne was playing with Tom Brady and Rory McIlroy at Seminole on Sunday when he predicted a Phil Mickelson-Justin Thomas playoff in the WGC-Mexico Championship. Afterward, the club president got a text from Brady saying, “You called it Dunne man.”

The scenario at Chapultepec is what the 40-year-old Brady faces every week in the NFL. At 47, Mickelson is 23 years older than Thomas. But age didn’t matter, or if it did, it mattered in Mickelson’s favor. He looked past the 2017 Player of the Year and FedEx Cup champion in the drawing of straws, and made par on the first hole of the playoff for his first win in 102 tournaments, a streak that goes back to the 2013 Open Championship.

The Patriots would have retired Brady had he gone that long without a victory, but this is golf and Mickelson kept making Cup teams and using those as motivation. As Ryder Cup captain Jim Furyk told me recently, “You could see it in Phil’s eyes, hear it in his voice.” The same way with the same desire that Brady shows every season.

Mickelson and Brady had been friends before Dunne invited them to Augusta National prior to last year’s Masters, but that’s when they really hit it off. Brady would throw spirals to Mickelson outside their cottage and they discussed the concept of sports science that Brady believes in, where ‘overload, overload’ is a way of creating body speed. Whether it’s throwing a bullet to Danny Amendola or smashing a 300-yard drive on the PGA Tour, it’s what coaches in the NFL and PGA Tour call ‘using the ground’.

Phil worked hard this offseason, but didn’t want anybody to know how hard. When I called in early January he didn’t want a big deal made out of his condition (under 220 pounds) or ball speed (currently in the ballpark with Alex Noren, Jamie Lovemark and Rickie Fowler at 172.89 MPH).

People, opponents, media would have expected too much – especially after splitting with swing instructor Butch Harmon and caddie Jim “Bones” Mackay. All he would share was, “I’m physically a lot stronger. I’ve been practicing and working to get my game sharp. I don’t know how it’s going to start out, but I’m very optimistic.”

Based on his winter, with three top-six finishes on the West Coast, that included a second-place finish at Pebble Beach, Mickelson was already right where he wanted to be in peaking for the Masters. The win in Mexico validated the work he put in to get his game back.

This is Phil’s 27th season on Tour. It’s also his third with swing coach Andrew Getson and second with brother Tim Mickelson on his bag. One year older than when Jack Nicklaus won the 1986 Masters, Phil heads into Augusta predicting, “there’s a lot more to come.”

I talked to Dunne early Monday, who concurred, “TB feels exactly the same.”

A real game-changer for India?

Shubhankar Sharma didn’t get the win he wanted, but the experience of playing with Mickelson on Sunday in the WGC-Mexico Championship was valuable. The 21-year-old native of India returned home for his country’s national open this week in Delhi after witnessing Mickelson’s hall-of-fame lesson on how to close for the 43rd time.

Prior to Sunday, there was some debate as to whether a victory by Sharma would have been a game changer for golf in the world’s second-largest country, with 1.3 billion people.

“Everybody thought when I won, it was going to be a big deal,” said Arjun Atwal, the first player from India to win on the PGA Tour. “But nothing really happened in India. Even though it was a really big deal, our country is so big and so overpopulated, how do you get through to the masses, because nobody really follows golf? I hope (Sharma’s performance) does in any small way, but we’ll see.”

Atwal followed in the footsteps of Jeev Milkha Singh, who won 20 events as a pro including four times on the European Tour. Atwal did what Singh could never accomplish, winning the 2010 Wyndham Championship by a shot over David Toms.

Anirban Lahiri has recorded the best finish by an Indian player in a major (T-5 in the 2015 PGA) and became the first native of India to compete in the Presidents Cup (2015 and 2017). He saw the performance by Sharma as the biggest game changer there’s been so far – but that was before his final-round 74. Coming off wins in the Joburg Open and Maybank Championship, the test will be how Sharma rebounds from a T-9 finish in his first WGC.

“He’ll have a huge reception back home regardless of what happened,” Lahiri said. “We’re all so proud of him.”

Knowing she’s a chronic tinkerer, David Leadbetter made a bet with Michelle Wie about whether she would make changes to what they worked on over the winter. He wasn’t talking about the color of her hair.

Leadbetter wouldn’t give me the amount, only going far enough to say it was “substantial.” He had been getting text messages from Wie even before her victory in the HSBC Women’s World Championship saying, “I’m still doing it. The bet looks good.”

What exactly did they change that led to Wie’s first win in 1,365 days? To take pressure off Wie’s torso and back, Leadbetter modified Wie’s leg action, softening her stiff right knee through impact. That created more control of a left-to-right ball flight.

“She’s still taped up like a boxer,” Leadbetter said. “But the major goal, trying to produce action that doesn’t put stress on her body and create injuries.”

Although not the longest player on the LPGA, Wie is still a big hitter so they also focused on wedge play, keeping the blade squarer through the ball. From a putting perspective, they went with more performance drills rather than technical instruction. While it’s early, Wie leads the tour in putting average with 26.45 putts per round that includes the 36-footer she made on the 72nd hole to win by a stroke. She did this with three different putting grips in the final round, but that was not part of the bet.

They worked together in January at the Bears Club near Wie’s home in Jupiter, Fla., and again before Wie headed to Thailand.

“I could see this coming,” Leadbetter said. “If she can just stay healthy, I think she’ll have a fabulous year.”

I Love the '90s, fashion edition

“We were both just kids,” Kelli said of her ’96 teammate. Kids with a lot of money: Kuehne was recuited by Tiger’s father Earl to sign with IMG, which negotiated a six-figure deal for Kuehne with Nike.

I talked to Kuehne from her home in Texas on Monday. Her favorite memories of that week include the contest she had with Tiger over who would wear the most Nike logos, plus the pleated pants and men’s extra small golf shirts that draped over her since Nike didn’t have a women’s line back then.

“They were so gigantic,” Kuehne said. “When you look at them on Facebook, they’re pretty amazing.” 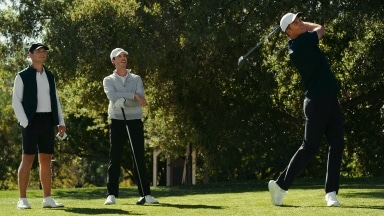 As Tom Brady prepares for a return to the gridiron, the legendary NFL quarterback is breaking into the golf apparel space. And in doing so, he’s enlisted the help of two of college golf’s best players. 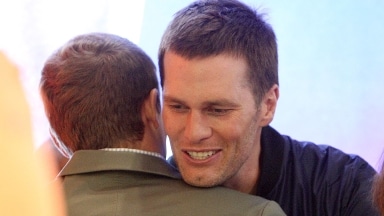 When it comes to discussing Tom Brady's official retirement, few in the pro golf space can offer the perspective that Jordan Spieth can.