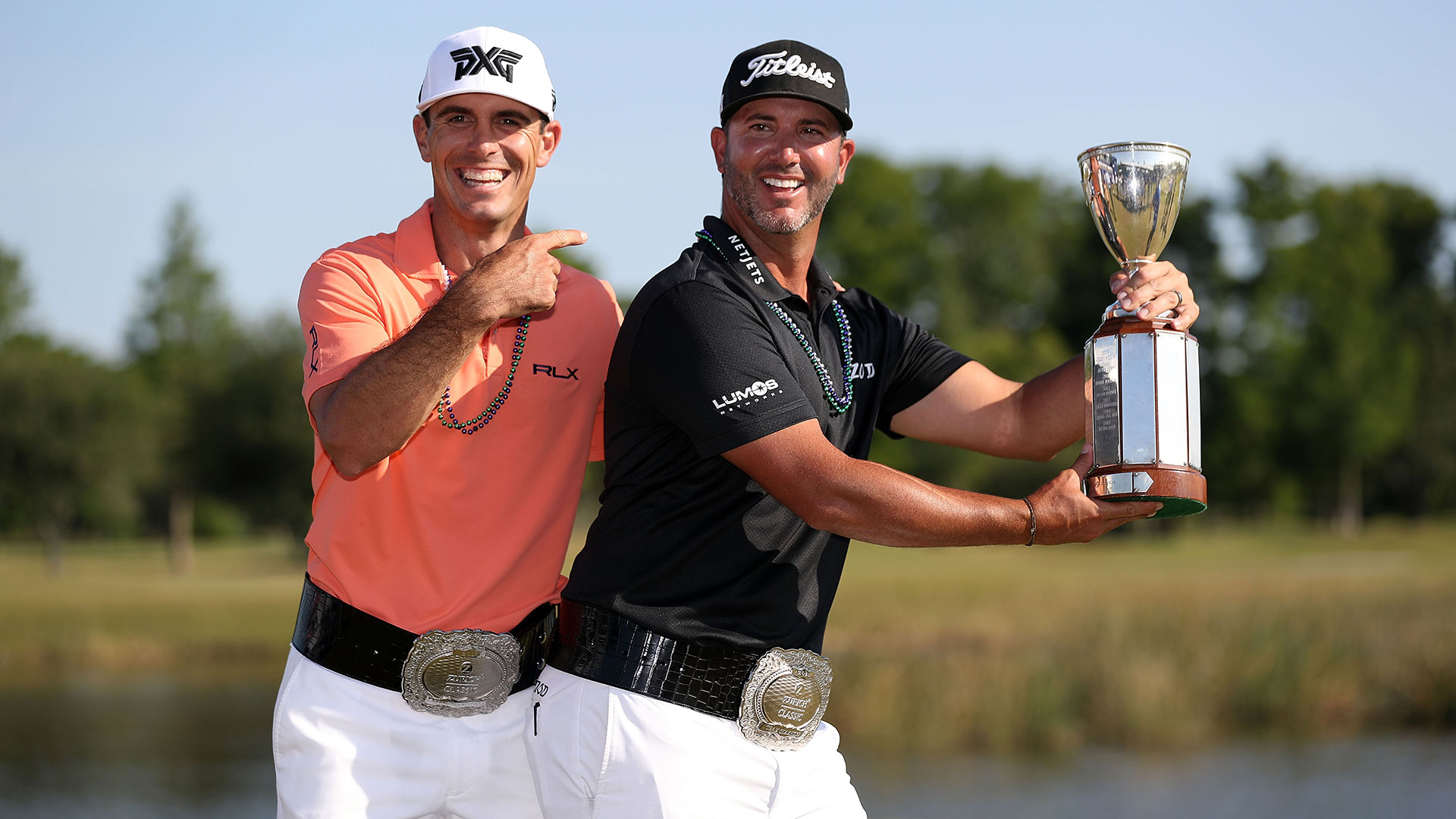 AVONDALE, La. – Scott Piercy faced a 3-footer for the win Sunday, but it wasn’t the first time that he has needed to close for Billy Horschel.

Over the past few months, growing increasingly frustrated with his results, Horschel re-hired a sports psychologist and struggled to heed his swing coach’s pleas to simplify.

And so it was up to Piercy, his longtime friend, to finally drop the hammer while rooming together in Hilton Head.

That’s what partners are for, right?

“He’s been close,” Piercy said, “and I just felt like I could get him over the edge.”

He pushed him all the way into the winner’s circle.

Horschel tied for fifth in South Carolina. He tied for 11th last week in San Antonio. And then, brimming with confidence, he put on a four-day stripe show here at the Zurich Classic, hoisting Piercy onto his back and carrying him to a one-shot victory at TPC Louisiana.

“When I’m putting hours and hours in and I’m not seeing the results, I get a little frustrated. I get a little antsy. I want it to happen,” Horschel said. “Everyone has just been saying: ‘Keep patient. Stay with the process.’ And then Scott gave me another thing to think about to free it up.”

Horschel will be the first to admit that his cluttered mind occasionally runs wild, but the 31-year-old was so confident coming down the stretch that he nearly predicted the finish.

In 2013, he rammed home a 27-footer on the 72nd hole to capture his first PGA Tour title. Walking up to the 18th green on Sunday, and eyeing what appeared to be a birdie putt of similar length for the victory, Horschel couldn’t help himself.

“Hey, listen, my reaction to this putt is going to be a lot better than when I won in 2013,” Horschel told Piercy, referring to his wild, double fist-pump celebration. “Pretty much the only thing he said to me was: ‘Don’t jump on me and hurt my back.’”

No worries there, since this putt somehow burned the edge. Horschel leapt into the air, shocked that this hadn’t gone down, too.

All that was left for Piercy was a 3-foot cleanup, and he whirled in the par putt. “It wanted a victory lap,” Horschel joked.

They said that if they had a clean card in alternate shot on Sunday that they’d be tough to beat, and indeed Horschel and Piercy combined to shoot a bogey-free, 5-under 67 – the low round of the day – to edge Pat Perez and Jason Dufner.

The PGA Tour switched to alternate shot in hopes that it would produce more late-Sunday fireworks, and perhaps even a few collapses. That didn’t pan out – the top 3 finishers all played the last six holes in even par – but the format change did provide an eye-opening look into what makes the best players in the world tick.

Dufner often lagged well behind the rest of the foursome after hitting a shot, wandering around as if searching for the beer cart. Horschel, meanwhile, was so hands-on as a partner that it looked like, at times, he was on the verge of grabbing Piercy’s clubs and hitting the shot himself.

“I had a partner who putted for me all week,” Piercy said, chuckling.

Trailing by one but playing in the same group as the leaders, Perez missed an 11-footer on 16, letting loose an expletive that surely will draw a fine from the Tour office. Then, after a two-putt par on 17, Perez hit a mediocre greenside bunker shot on 18 that left Dufner 14 feet to tie.

His putt never even scared the hole.

“Disappointed to leave the last putt short,” Dufner said. “You want to get that one at least to the hole to give it a chance, but the other guys played a little better today.” “We got beat – we didn’t lose it,” Perez said. “They played phenomenal, so hats off to ’em. They did what they were supposed to.”

For both winners, there was a feeling afterward of validation.

Horschel hadn’t felt good on the greens this season, but last month he cut down his putter to 33 1/2 inches – the same length he used to win the FedExCup in 2014 – to let his arms hang more naturally. His long game started to come around, too, after talking with Piercy in Hilton Head.

Piercy was merely reinforcing what everyone else around Horschel had been telling him – stick to the draw, simplify your game – but it was exactly what he needed to hear at the time.

“It was about what got me going. What got my confidence up. What triggered me to feel confident,” Horschel said. “Trying to get back to that mindset and that thinking.”

Piercy was even more appreciative. Nagged last summer by injury, he shut it down for four months to let his back heal. He returned in the fall with little success, and he only began to feel like himself again in January.

Now, both times he has battled injuries in his career – in 2014 and ’17 – he returned the following year with a victory.

“A win lets you know that you’re back,” he said.

And now, thanks to his pep talk, so is his partner.