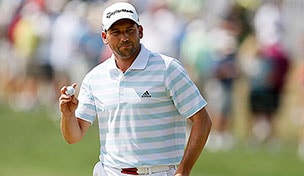 DUBAI, United Arab Emirates – Less than three years ago, Sergio Garcia was mired in a slump so prolonged that he missed out on the 2010 Ryder Cup team and saw his ranking fall as low as 85th. He moped around the golf course and at one point talked of giving up the game altogether.

But rather than walking away, the former No. 2-ranked Spaniard said Wednesday he used those dark days in 2009 and 2010 as an inspiration to find his way back. He has won twice in each of the past two years and a victory this week at the Dubai Desert Classic could propel him back into the top 10.

He is up to No. 14 in the latest rankings, after finishing second at last week's Qatar Masters, a shot behind Chris Wood.

''Excited. It's been two good years,'' Garcia said. ''But more than anything, I'm excited because I know how I'm feeling. I know how my attitude is on the course. I know how my will is to try to do things to get better. ''

''We had a good start of the season, which is always nice. So I just want to make sure that everything stays the same. Because I'm going to have bad weeks, but if I can manage to stay with the right attitude, even on the bad weeks, it's going to make the year go so easy and so much better.

His return to form has also stoked talk of Garcia finally winning a major – something he has come agonizingly close to on several occasions. Garcia has twice been in the final group with Tiger Woods (U.S. Open at Bethpage, British Open at Hoylake), the runner-up at age 19 at Medinah, in a playoff at Carnoustie in 2007, and a runner-up to Padraig Harrington at Oakland Hills in the 1998 PGA Championship.

The 33-year-old Garcia brushed aside talk of a major victory, saying he will just keep playing golf and let the results speak for themselves.

''My form, I feel pretty good about it,'' Garcia said. ''Do I feel like it's the best I've played my career? Probably not. But I feel fairly good for the most part.''

After winning The Players Championship in November 2008, Garcia went 2 1/2 years without a top-three finish. It would be almost three years before he would win again, on either the PGA or European tours. His ranking, a career-best No. 2 in 2009, plunged as low as 85.

Garcia credits his recovery that began with a string of wins in Spain in 2011 partly to his improved short game – on display down the stretch in Qatar – as well as a better attitude on and off the course. He also benefited from laser eye surgery last year that corrected his astigmatism – improving his aim and reading of the greens.

''I've always said that the bad days and things like that or the bad losses, if you take them the right way, they are very good, because you can learn a lot from those days,'' Garcia said.

Garcia's resurgence has not gone unnoticed by his Ryder Cup teammates, or those younger players who have long idolized him.

''He played well at end of last year, winning at the Wyndham Championship and had a few other good results winning in Johor (Open),'' said Lee Westwood, a Ryder Cup teammate who is also playing this week in Dubai. ''It's nice to see him playing well. The game of golf needs characters like Sergio.''

Rafael Cabrera-Bello, a Spaniard who won the Dubai tournament last year and grew up trying to emulate Garcia's bold and aggressive play, said he has seen a different player on the course in recent months.

''We all know he had a period where he wasn't enjoying golf, wasn't playing too good,'' Cabrera-Bello said. ''I think he is well over that. Even if he is on the course and things are not going his way, he is looking at it from a different perspective. He is enjoying the game again.''