Garcia: I'm not good enough and now I know it 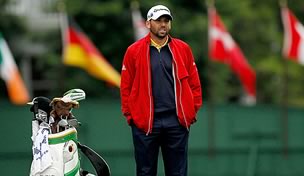 After yet another opportunity slipped through his fingers on Saturday at the Masters, Sergio Garcia admitted he may not have what it takes to ever win a major.

'After 13 years, today has been the day ... I don't have the capacity to win a major,' Garcia said, according to El Pais, translated into English.

Garcia shot 3-over 75 in the third round to fall eight shots behind Peter Hanson at Augusta National.

'It's the reality. I'm not good enough and now I know it. I have tried for 13 years, thinking I can win. I don't know what happens to me,' Garcia added. 'It could be something psychological, but if the shots don't fall ... It is simpler than it seems. After 13 years, I have run out of options. I'm not good enough for the majors. That's it.'

Garcia said he will try for his sixth top-3 finish in a major.

'I will try to be second, or third,' he said. 'You can live without a major.'