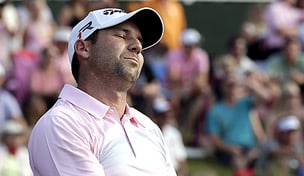 Sergio Garcia must know the kind of frustration that plagued Sisyphus in Greek mythology.

He’s the king the gods punished by compelling to roll a boulder up a hill, a damned task in that he spends eternity trying over and over again to roll the boulder to the top, only to see it roll back down without ever reaching the peak.

That must be what Garcia feels like going up against Tiger Woods.

Garcia’s rock, though, kept rolling into the water at the TPC Sawgrass Stadium Course’s 17th and 18th holes in Sunday’s finish, with Woods going on to win The Players Championship.

Photos: Garcia through the years

Woods is one obstacle Garcia appears doomed never to overcome.

Talent isn’t holding Garcia back. Even his putting is more asset than liability these days. He’s third in strokes gained-putting this season. Really, he has to be encouraged the way he played Pete Dye’s maddening golf maze for 70 holes. He also has to be encouraged seeing the failure Adam Scott overcame winning the Masters last month.

We were reminded again this past weekend that it’s Garcia’s attitude that seems to be holding him back from greater glory.

Back when Garcia fell short at the U.S. Open at Bethpage Black in ’02, he complained in the second round that the USGA would have halted play in the weather conditions he endured if Woods had been out in his wave. He was justifiably aggravated by fans who seemed to be ganging up on him in taunting him over his difficulty with waggles.

When Garcia lost the British Open at Carnoustie in 2007 to Padraig Harrington, he was inconsolable in the aftermath. He watched one of his shots that Sunday hit the flagstick and carom 20 feet away. The golf gods, he assumed, were conspiring against him.

“I’m playing against a lot of guys out there, more than the field,” Garcia said back then.

When he struggled at the Masters in ’09, he called the set up “unfair” and “too tricky.” He later apologized.

“I’m not good enough,” he said of his attempts to win a major. “I don’t have the thing I need to have. The conclusion is I need to play for second or third place.”

Garcia is still just 33, really in the prime of a golfer’s career. It’s all still out there for him if he can get his head where it needs to be to win the big events he most wants to win. He’s 0 for 58 in majors, but Phil Mickelson didn’t break through until he was Garcia’s age with his first win at the Masters. Mickelson’s won three more majors. Ben Hogan didn’t break through to win his first major until he was 34. Scott just broke through at 32.

We’re fascinated watching Garcia, because he is one of the most exciting and unpredictable players to follow. He has an arsenal of full shots that can match Woods or any other player. He has more flair, more magnetism, more passion than a dozen other PGA Tour pros combined.

You sit up a little straighter when you see Garcia is in contention, because he brings electricity, intangibles that help boost his star power.

Still, Garcia said it best at The Players when he laid out the challenge he faces.

After Sunday’s late collapse, when asked if he wished he had better handled his little squabble with Woods the day before, Garcia shook his head.

That pretty much sums up Garcia’s attitude about his biggest losses on the game’s largest stages.

He seems to see himself as a victim in a larger sense than he even meant Sunday.

If you’re a Garcia fan, you don’t want him believing that.