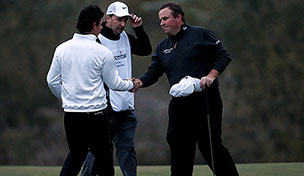 MARANA, Ariz. – Lil Abner’s was a lively place Tuesday night. About 20 Tour types moseyed through the dimly lit steakhouse, a contingent that, interestingly enough, included Shane Lowry and Rory McIlroy. They dined together on the eve of their Round 1 tilt at the WGC-Match Play Championship.

If you’re surprised, don’t be. Friends since they were teammates on the Irish amateur squad, they break bread frequently on Tour. Play practice rounds together, too.

And whatever intimidation factor existed in playing the world No. 1 on a grand stage likely disappeared over a full rack of pork ribs.

“It’s only a game of golf; it’s not life or death,” Lowry said Thursday night. “We weren’t going into battle. It was just a normal dinner.”

Over the course of 18 holes, not much separates the No. 1 player in the world and No. 66. A few more shots in the arsenal, maybe. The confidence to know he has done it before, perhaps.

“But I think it was a bit of a banana skin for him,” Lowry said. “It was always going to be tough for him being the world No. 1 no matter who he plays against, no matter if it’s me or anyone else. Because anyone going out to play against Rory is going out to beat him because he’s the best.”

Indeed, because there are expectations – heavy burdens – placed on the top-ranked player. And Rory McIlroy’s expectations have never been more outsized.

First there was the mega-deal with Nike during the offseason, the one that came with smoke tunnels and holograms and cutesy commercials. (New slogan: No bracket is safe.) Then came the 75-75 missed cut in Abu Dhabi. And now this, a first-round exit here, 1 up to Lowry, meaning that for the third time in the last four years, the No. 1 overall seed has been sent packing after Round 1.

And meaning also that McIlroy has played just three competitive rounds since Nov. 25. The Masters, if you’re counting at home, begins in 49 days.

“Obviously disappointed I didn’t get to play a little more golf this week,” McIlroy said, “but I’ll practice over the weekend.”

This is the first of three consecutive starts for the Northern Irishman, and he arrived in the high desert believing that his game was on track, that he had “turned the corner,” that those highlights of his one-handed follow-throughs were a distant memory.

No doubt, his game looked better at Dove Mountain, in the limited action we saw. His driving off the tee was markedly improved, save for a hook off the 15th tee that led to a critical lost hole. But his iron play was spotty, missing wide right down the stretch.

“Just getting ahead of it,” he explained. “I think it’s more a timing thing than anything else.”

Meanwhile, as McIlroy searched to find a consistent swing, Lowry thrived in the spotlight. Walking down the 11th fairway and all square in the match, the Irishman turned to his caddie Dermot Byrne and said, “He’s not liking this one bit. He’s the one under pressure. I’ve got nothing to lose, so let’s have a go from there.”

Almost on cue, Lowry chipped in from behind the 11th green for birdie to halve the hole. Then he sailed his tee shot on the par-3 12th over the green, the ball nestling against one of the grandstands. Lowry took a free drop, slid his wedge under the ball and lofted it softly on the green. A few tense seconds later, it tumbled into the cup for an improbable birdie. One up.

“That gave me the momentum to go on and win the match,” Lowry said.

“That wasn’t easy, but I’ve seen him do it so often you half-expect it,” Byrne said.

Perhaps even more impressive, Lowry followed that shot with a fairway wood to 3 feet on the par-5 13th, setting up a conceded eagle – a birdie-birdie-eagle stretch that gave him a 2-up lead he wouldn’t relinquish, even after missing a 4-footer on the very next hole.

The turning point came on the short 15th, when McIlroy hooked his drive into the desert. His ball settled next to a cactus bush, and he needed to play the shot left-handed just to extricate himself. He slapped out into the bunker, then bladed his bunker shot over the green and conceded the hole.

“He did hit a few ropey shots today coming in,” Lowry said. “But I mean, everyone hits bad shots. At the end of the day, he’s only human.”

On Tuesday, two days before he eventually would peg it against McIlroy, and just a few hours before they dined together at Lil Abner’s, Lowry conceded that a victory over the world No. 1 would be “one of the great stories of my career.”

The accomplishment wasn’t but 30 minutes old. McIlroy was still gathering his belongings in the locker room. Byrne was still skimming through messages on his cellphone. But Lowry was asked how it felt now that he’d knocked off his former teammate, his good friend, the top-ranked player in the world.

“It’s definitely a day I’m going to remember,” Lowry said. “I’m sure, after a few weeks or a couple of months, I will slag Rory over it. But at the end of the day, it’s only the first round. I’ve only beaten one player, and I’m here to beat more.” 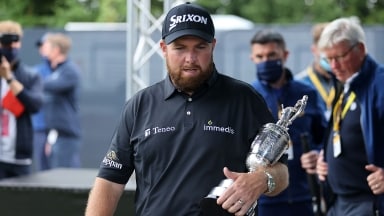 Shane Lowry may have had to finally return his claret jug on Monday, but he was also glad to have golf's oldest championship back. 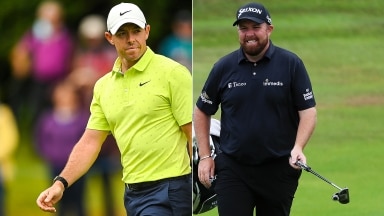 With one week remaining before The Open Championship, Rory McIlroy and Shane Lowry are trending in opposite directions.

Shane Lowry had the claret jug in his possession for an extra year and it didn't go unscathed.