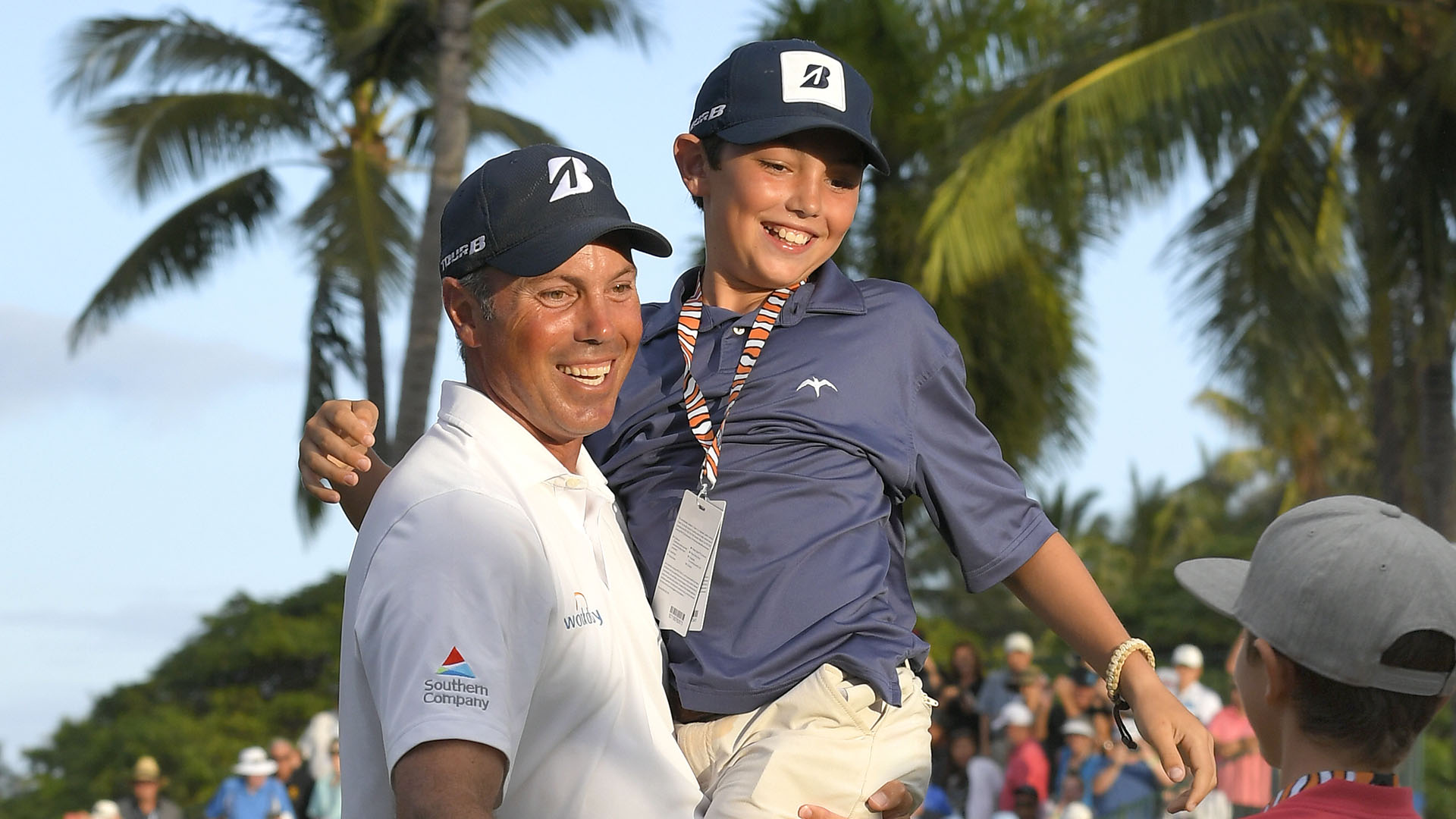 HONOLULU – The soft fades. The Opie Taylor smile. The 1950s lexicon. Everything about Matt Kuchar screams boy next door.

Kuchar is a 40-year-old father of two with a receding hairline and an outward demeanor on the golf course that dovetails perfectly with the kind of disposition one would want from their accountant.

“Oh, gee. Get down,” Kuchar pleaded as his tee shot on Waialae's Country Club's 13th hole faded into a bunker during Sunday’s final round of the Sony Open.

The next time Kuchar breaks into a demonstrative celebration on the golf course will be his first. Not his style. Especially in victory, which he experienced for a ninth time on the PGA Tour on Sunday in Honolulu.

He didn’t unleash an emotional roar or out-of-character celebration. It was subdued, like Kuchar – a simple wave of the cap and hug for caddie, John Wood, before hoisting his kids in the air while embracing his wife, Sybi. And there was that smile, the one that suggests that 17 years after his first Tour victory at the 2002 Honda Classic he’s still just happy to be here.

It’s that toothy grin that grabs you. It’s disarming and genuine, but it hides a drive that rivals the best in the game. The smiling assassin can kill you with kindness, as long as he kills you on the golf course.

The final score from the Sony Open will suggest a breezy stroll to victory for Kuchar, who defeated Andrew Putnam by four strokes. But that ignores a performance that cuts to the essence of who Kuchar is.

For 54 holes, Kuchar had been virtually flawless, posting just a single bogey in an effort that appeared effortless. But in the span of four holes on Sunday (Nos. 2-5), he tripled that output when he missed the green at the second hole and three-putted for the first time in four days at the fourth. He dropped out of the lead for the first time since Friday when he dumped his approach shot in a bunker at the fifth to fall one shot behind Putnam.

What had been easy was now arduous.

For the second consecutive week on Tour it was shaping up to be another come-from-behind victory following Xander Schauffele’s triumph over 54-hole frontman Gary Woodland at the Sentry Tournament of Champions.

“I'm going to need to make birdies. Just there are enough birdie holes out there and enough good players that I know that I can't just coast. I need to continue playing well,” Kuchar said on the eve of the final round. “The goal is to increase the lead as much as you can.”

Not letting up is certainly the preferred method, according to nine out of 10 sports psychologists. But Kuchar’s recent history in these types of pressure-packed situations hinted at how difficult the concept is in practice. Late last year at the Mayakoba Golf Classic, he began the final round with a four-stroke lead but bogeyed two of his final five holes on his way to a one-stroke victory.

That finish, even in victory, left a mark, and when a two-shot advantage on Sunday vanished in five holes, there was cause for concern.

“I was in a battle. Andrew was playing really good, steady golf,” Kuchar said. “I was kind of excited to be in the battle and not just have the lead. I kind of looked at the situation and said, All right, you've got a battle on your hands. Let's see what you can do now.”

As the tension climbed, the other Kuchar emerged. The guy who will take on all challengers in ping-pong and relish any opportunity to launch a friendly jab.

“He loves to compete. He comes to the Ryder Cup with two or three different outfits to play in while he’s playing ping pong when he’s going to kick your butt,” said Davis Love III, adding that one of those outfits was once a tuxedo. “It’s a confidence thing or cocky, whatever you want to call it. There’s just something different about all of these guys.”

Two years ago, following the U.S. team’s commanding victory at the Presidents Cup, Kuchar began the post-match press conference with an impromptu monologue and a not-so-subtle poke at Phil Mickelson.

“This team was just an amazing bunch of guys. We had 11 guys in the Tour Championship; everybody except Phil Mickelson was at East Lake,” Kuchar said with a smile. “It was like, how many times does it happen that you get 11 out of 12. If it was only for Phil, we would have had 12 of 12, but Phil was not there.”

It was that side of Kuchar, the fierce competitor with a bedside manner straight out of a high school locker room, that turned what was shaping up to be another collapse into a commanding performance at Waialae.

Kuchar converted birdie putts of 4 and 9 feet at Nos. 10 and 12, respectively, to move back into the lead, and he added two more at Nos. 15 and 16, complete with an out-of-character fist pump, to pull away from Putnam and set the stage for his coronation.

For Putnam, who had never been paired with Kuchar in a Tour event, it was a vivid introduction. The cheerful veteran with the pleasant exchanges was suddenly transformed into a hired gun with all the answers.

“Kuchar was making birdies and played great coming down the stretch. I just couldn't keep up with him,” Putnam said.

Asked his thoughts on his second victory of the young Tour season, Kuchar shrugged and said, “I’m tickled.”

And just like that he was transformed from the Terminator back to Opie. He even took a moment on the 72nd green to savor his accomplishment amidst the flora and fauna.

With a rainbow perfectly framing Waialae’s 18th green as he surveyed his 2-footer for birdie, Kuchar nudged Wood.

“To see a rainbow out there was a special kind of magical moment,” Kuchar said with his signature smile and his two young sons at his side.

In less time than it takes to hoist a trophy, the paradox of Kuchar came full circle: Competitively vicious when the balls are thrown in the arena – be it a golf course, ping-pong table, tennis court or whatever – and perfectly pleasant the next.