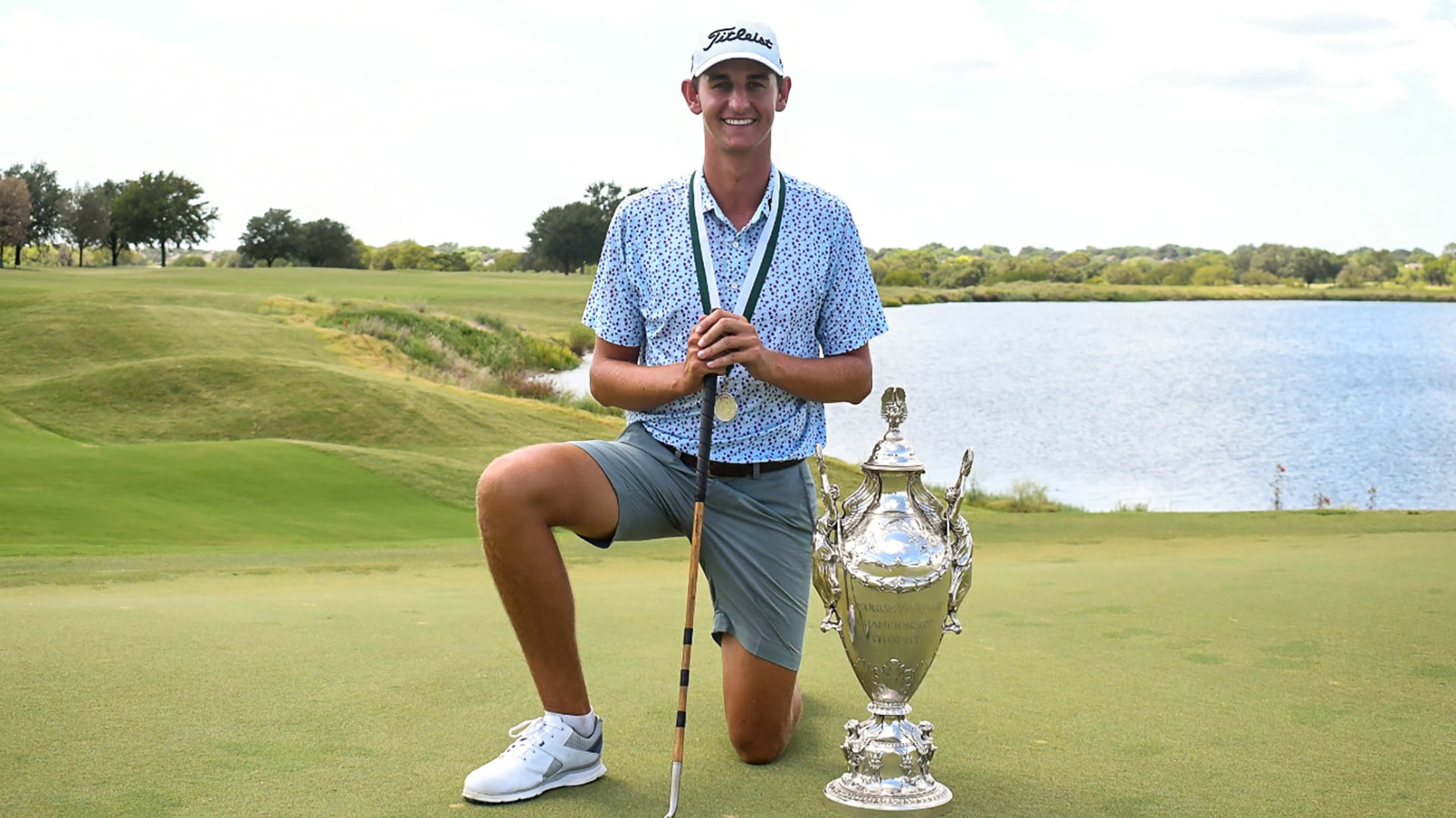 Shortly before traveling to play in the Southern Amateur earlier this month, McClure Meissner made a quick trip from his home in San Antonio up to Boerne, Texas, to meet with his instructor, Bryan Gathright.

The lesson lasted only 45 minutes, with Meissner hitting balls for about a half hour, then sitting down for short chat inside Gathright’s hitting bay at Cordillera Ranch.

“You’re one of the best players out there,” Gathright told his standout student.

The night before the final round at Maridoe Golf Club near Dallas, with Meissner sitting six shots off the lead, Gathright reaffirmed that statement over text.

“That gave me tons of confidence,” Meissner said. “I woke up and felt a lot more comfortable, less nervous. I just went out there and played aggressively and trusted in the ability that I’ve been given and that he’s taught me.”

While he still didn’t think he had much of a shot to win, Meissner rocketed up the leaderboard with four birdies in his first eight holes. When he rolled in a 15-footer at the eighth, he realized, “Hey, I can make a run at this.”

With Texas studs Cole Hammer and Pierceson Coody falling back, Meissner continued his charge. He had just nearly holed two straight approach shots, at Nos. 12 and 13, when he looked at the leaderboard and saw he was leading by two shots. He added a birdie on the next hole and after signing for a closing 6-under 66, defeated fellow All-American David Perkins in a playoff to notch the biggest win of his amateur career.

The SMU senior won the Mustangs’ conference title two seasons ago, breaking Bryson DeChambeau’s AAC record by shooting 13 under in 54 holes around Innisbrook, but he had rarely performed against fields like this. Meissner beat nine first- or second-team All-Americans from last season, including first-teamers Quade Cummins (by two shots), Williams Mouw (by six), John Augenstein (by eight), Cooper Dossey (by 10) and Trent Phillips.

“One of my biggest problems has been, you know, I think I’ve done really well in college events against fields that might not be as good, and when I’ve gotten into big amateur events, I’ve struggled feeling like I’ve belonged, like maybe I’m not quite good enough to get a win in fields like that,” Meissner said. “But to go out there and play that well the last round against such a good field, I think that gives me the most confidence in the world.”

SMU head coach Chris Parra, who took over for Jason Enloe last season, remembers recruiting Meissner, nicknamed “Mac,” as a 17-year-old, under-the-radar prospect. The Mustangs didn’t have much competition, with Rice, where Meissner’s older brother attended, being the only other notable contender.

“I saw he was a ferocious worker, he doesn’t let anyone outwork him, and when he got into a groove with his ball-striking, he could put balls on ropes,” Parra said. “But he’s pretty tough on himself. I think a lot of those guys who work so hard, they search for perfection. I knew that he could be special if he could get his attitude right."

It didn’t take long for Meissner to make an impact in Dallas. He shot 67 in his first college start and played in all 11 events for the Mustangs as a freshman. He was named team captain as a sophomore and put together a third-team All-American season, capped by a top-15 finish at the NCAA Championship, where he overcame a three-putt on his 72nd hole by making a clutch birdie to help SMU reach match play in a sudden-death playoff with Clemson.

“I remember after he horse-shoed that putt, he told the guys, ‘I’m sorry, but now I’m going to help us get through this,’” Parra said. “That was Mac growing up.”

Meissner’s self-belief steadily continued to grow last season, as he set a school record for scoring average (70.44) and compiled four top-5s, including a co-victory at the Royal Oaks Intercollegiate. Yet, when it came time for Arnold Palmer Cup selections, Meissner, ranked 15th in Golfstat, was passed up for the U.S. team, several players ranked below him instead getting nods.

“It was frustrating to not be considered,” Meissner said. “I think I used that as a little bit of fuel. I wanted to get my name out there a little more.”

After his Southern triumph, Meissner has succeeded. His stellar play on the final day even caught the eye of U.S. Walker Cup captain Nathaniel Crosby, who was at Maridoe scouting American talent.

Meissner said it would be an “absolute dream” to play in the Walker Cup, set for next May at Seminole. His chances have never been better, too, as his win bumped him from 35th to 23rd in the World Amateur Golf Ranking and he is now the 12th highest-ranked American entering two more star-studded summer tournaments: this week’s Western Amateur and next month’s U.S. Amateur at Bandon Dunes.

“When you’re not talked about, you can feel irrelevant at times,” Parra said. “Well, there’s definitely been a notice now, and he just needs to continue to play golf the way he knows how to play and have the best attitude, and I truly think that will take care of itself.”

After all, Meissner isn't just good enough to win again this summer, or to make the Walker Cup team.

He's one of the best players out there.