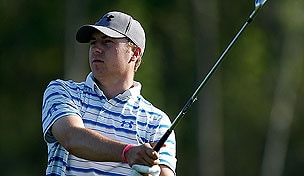 SAN ANTONIO – In a matter of months, Jordan Spieth went from possibly playing Monday qualifiers on the Web.com circuit to the PGA Tour’s premier pairing.

The 19-year-old first-year pro, who began the season with no status and since has earned special temporary membership, will be paired with Rory McIlroy and Matt Kuchar for the first two rounds of the Valero Texas Open.

“I’m surprised I wasn’t paired with some better players,” Spieth said, laughing. “But no, it’s a great opportunity for me.”

Last year, Spieth tied for 41st at TPC San Antonio, where he received a sponsor exemption as a University of Texas freshman. He would go on to help the Longhorns win the NCAA Championship, earn low-amateur honors at the U.S. Open, and eventually turn pro in December.

The transition to the play-for-pay ranks has been a successful one for Spieth, a two-time U.S. Junior champion. He tied for 22nd at Pebble Beach, posted back-to-back top-7 finishes on the Web.com circuit, and then nearly won the Puerto Rico Open, finishing in a tie for second. A week later, he tied for seventh in Tampa to secure special temporary status, enabling him to receive unlimited sponsor exemptions.

Not bad for a kid who began the year with no status on any major tour.

“When I turned (pro), there were some voices,” Spieth said. “But I just kind of threw them out. I didn’t listen to it. I didn’t believe. I never looked back. I knew that I was going to be able to have enough opportunities through sponsor’s exemptions this year that I (knew) I could take care of it myself by starting off the year strong.

“I don’t think the way I’ve played this year has necessarily validated it. I mean, that was my goal, but I never really had any regrets.”

As for the two top-10 players in his group this week, Spieth has played a practice round with Kuchar at last year’s U.S. Open and only briefly met McIlroy.

“He’s only a few years older than me,” Spieth said of the 23-year-old McIlroy, “and he’s accomplished so much, so I look up to him as a player and as a person. Hopefully I’ll get off to a good start and test my game against his.”