Lewis leads Thailand after 9-under 63 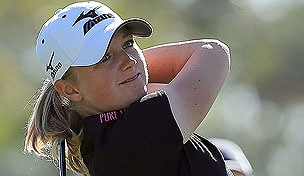 Lewis, the tour’s player of the year last season, opened the Honda LPGA Thailand with a 9-under-par 63 Thursday in the first round at Siam Country Club to take a three-shot lead on Karine Icher and a four-shot lead on Inbee Park, Catriona Matthew, Gerina Piller and Amy Yang.

Rolex world No. 1, Yani Tseng, opened with a 75 in her bid to win this event for a third consecutive year. Lydia Ko, the 15-year-old amateur, started with a 69.

Lewis tied for 15th in the LPGA season opener in Australia last week. She won four times on tour last year. At the third hole Thursday, she found a spark to her low round. She holed an 8-iron from 145 yards.

“That shot just really gave me the confidence to really start swinging at it,” Lewis said. “I think I missed two greens all day. I just had a ton of birdie putts, and I even left a few out there.”