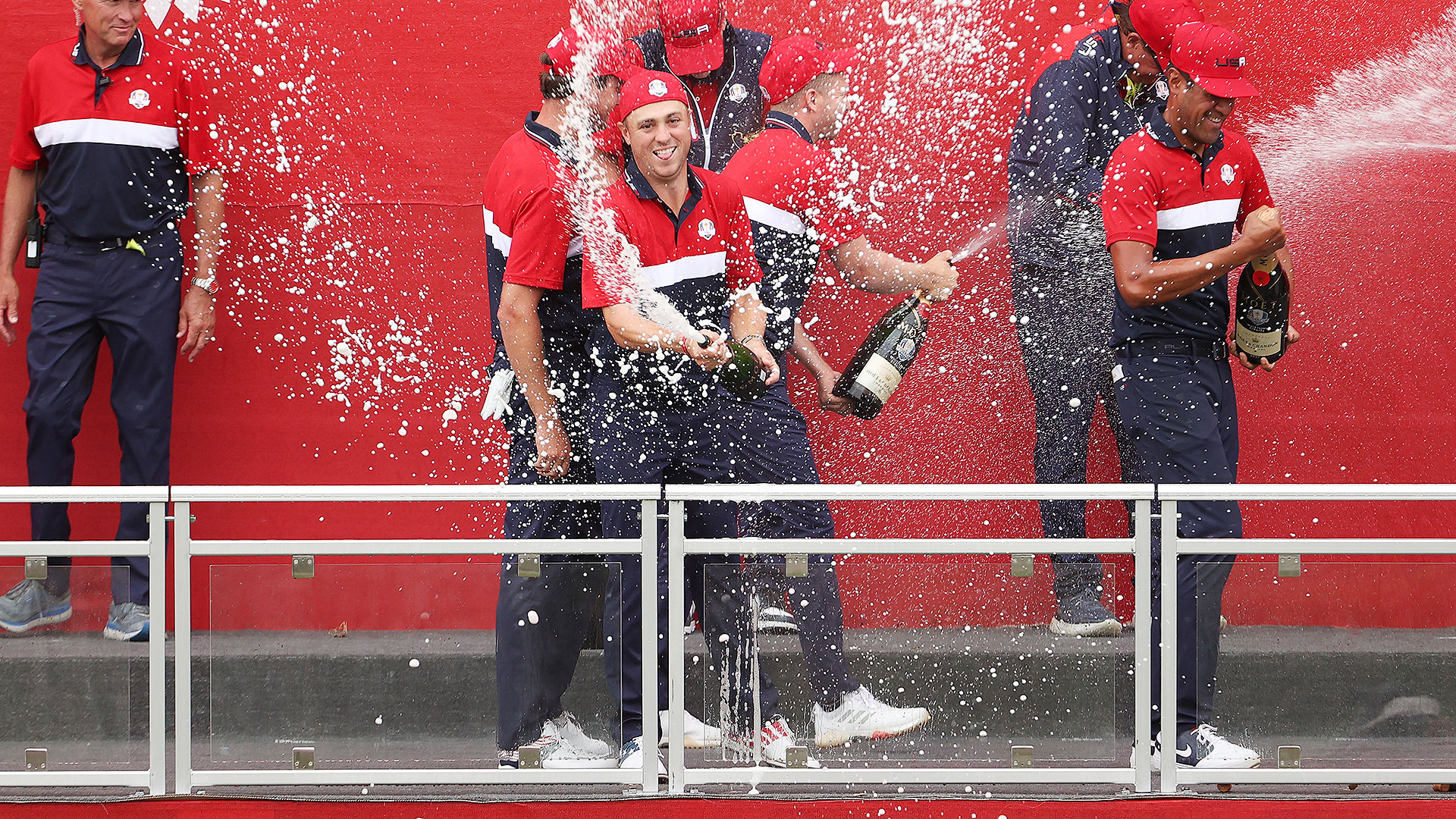 SHEBOYGAN, Wis. – From a time zone away, Tiger Woods played his role.

Steve Stricker is many things. Proud father of Bobbi and Isabella. Husband to Nicki. Chicago Bears fan and Midwestern to his 54-year-old core. But he’s not big on pep talks.

Stricker is, after all, the same player who reinvented himself not once but twice, making him the only PGA Tour Comeback Player of the Year Award winner, and he applied that same results-driven meticulousness to his gig as U.S. Ryder Cup captain. He’s a natural.

What he’s not is a stand-in-front-of-his-team-and-pound-his-chest kind of guy. So, Tiger did it for him.

According to various sources inside the U.S. team room, Woods spent the week dropping Stricker text messages and on the eve of Sunday’s singles session he sent the American side the kind of message that Stricker would not – step on their necks.

With a commanding 11-5 lead heading into the final day, the U.S. team didn’t want to just win the Ryder Cup, they wanted to send a message. They wanted this to be a statement on the state of American golf and, oh my, did they prove their point.

Late Saturday in European circles, vice captains and players whispered about Ryder Cup history. About the 2012 matches at Medinah and how the U.S. team blew a 10-6 lead. About how there was still a chance despite the insanely long odds.

“I think we were a half-point short of that in the Miracle at Medinah on Sunday, so we're just going to have to push for that tomorrow,” European captain Padraig Harrington said in the Saturday gloom.

On the other side of the Whistling Straits compound, the U.S. team was contemplating their own slice of history. They weren’t thinking about Medinah and the European “miracle.” The truth is, the ’12 matches mean nothing to this group of American players. It’s just a chapter in a dusty history book.

Four players on this year’s U.S. team – Xander Schauffele, Jordan Spieth, Justin Thomas and Daniel Berger – were just a year removed from high school when the European team led by Jose Maria Olazabal won 8 ½ of the 12 available points on that fateful Sunday at Medinah.

Another member of this year’s team, Patrick Cantlay, had just bolted UCLA and turned pro while Collin Morikawa was a 17-year-old senior at La Cañada (Calif.) High School.

On Saturday night while the Europeans envisioned another “miracle,” the U.S. team never asked about the ’12 matches. Never even mentioned it.

“No, no,” said Davis Love III, when asked if Medinah was discussed. “There was absolutely nothing last night. Zero. They were either with their trainer or in their room. They are the most disciplined guys I’ve been around.” 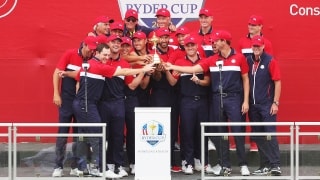 Instead, Love – a vice captain for this year’s matches and the captain of the U.S. squad in 2012 – said the team was focused on a much different historical mark. No team since the Continent was included in the matches with Great Britain and Ireland in 1979 had earned 19 of the available 28 points.

“I woke up this morning and told the guys, let's get to 20 points. Because this is gonna be the next era of guys for the U.S.,” Cantlay said.

The notion of a historic European comeback was quickly dismissed. Rory McIlroy won the day’s first point to end an emotional week, but the next three matches quickly went to the Americans, and Morikawa, playing in the day’s fifth group, secured the cup with a tap-in birdie at the par-3 17th hole that guaranteed at least a half-point.

But there was no celebration. No concession like Jack Nicklaus’ famous gesture at the ’69 matches. Instead of an all-out celebration, the Americans quietly huddled in groups and studied the leaderboard. This felt personal, not mean but there was a dollop of malice after decades of struggle for the U.S. side in the biennial bout.

“We were told by a member of the team today that the record was 19 points and that we should go out and try to get 19 points, and that's what we did,” Spieth said.

It’s not great form to dance on the logo so the U.S. team took the high road, but make no mistake, after years of poor performances and painful losses the 10-point blowout was somehow cathartic.

“I’m very optimistic about our chances of winning,” Tony Finau said late Saturday. “They’ve run the score up on us before and if we have the opportunity tomorrow, we are going to run it up, too.” 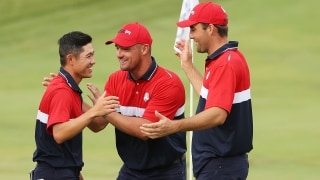 Here's a look at the individual player records for the victorious U.S. team in the 43rd Ryder Cup at Whistling Straits.

In the coming weeks, the 43rd Ryder Cup and the U.S. team’s performance will be completely dissected and that debrief will undoubtedly include a nod to the U.S. task force.

Maligned and mocked in many circles, the task force was born from the 2014 loss in Scotland and it created some much-needed continuity between captains and teams. Some have contended that the Ryder Cup would never be won in committee meetings, but it’s worth noting that Stricker would likely never have gotten his turn as a Ryder Cup captain if not for the task force. Until the PGA of America allowed for the overhaul, U.S. captains were pulled from the major championship club, which Stricker is not member.

The task force also allowed for plans and procedures to carry over from one match to the next, like the lesson learned on that painful Sunday at Medinah.

“We just didn’t formulate a good enough game plan going into Sunday,” Stricker said when asked what he learned from the ’12 meltdown. “We probably should have had a different lineup and gone out a little stronger. We realized that.”

The captains are given an hour after the final match to produce the next day’s pairings and late Saturday as Harrington waited, Stricker and his crew took every available minute. He might not have the moxie to deliver an inspiring speech, but he’d spent three years studying pairings and matchups. He wasn’t going to be beaten on paper.

From the outset there wasn’t enough of the Continent’s blue and gold on the board. The truth is, there never was. Scottie Scheffler, the only true American rookie, made sure of that with five birdies through his first six holes on his way to a 4-and-3 victory over world No. 1 Jon Rahm. Whatever fight the Europeans brought to Sunday was quickly lost.

“It didn't go right, but that happens in sport. Just remember, if you want to have these glorious moments, you've got to put your head out there, and sometimes it doesn't go right. You get your head knocked off,” Harrington said.

As a largely sullen European team went through the motions with the media, the Americans showered each other with champagne. When the U.S. team was given their turn, with cigar smoke (Schauffele) thick in the air and most players nursing an adult beverage, the conversation turned to Rome and the 2023 matches. Could this young and fearless group do what no American team has done since 1993 and win the Ryder Cup in Europe?

“We are just going to enjoy now. You're thinking way too far ahead for me, personally,” a joyfully imbibed Schauffele laughed. “I had no idea we had media after all of this, so we're going to enjoy this one for now, and collect ourselves shortly after.”