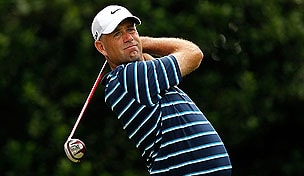 Getty Images
CHARLOTTE, NC - MAY 04: Stewart Cink of the United States hits a tee shot on the 11th hole during the second round of the Wells Fargo Championship at the Quail Hollow Club on May 4, 2012 in Charlotte, North Carolina. (Photo by Streeter Lecka/Getty Images)  -

The 2009 British Open champion has just five top-10 finishes on the PGA Tour following that memorable victory over Tom Watson at Turnberry, and none since May 2011.

Much of that decline can be attributed to a swing change gone awry. Believing that he needed to add a draw to his repertoire, Cink has seen his world ranking slip from 15th at the end of 2009, to 47th, to 140th, to 319th, to his current spot at No. 333.

Now, the 39-year-old says, “I’m just trying to be a little more fundamental. I’ve looked at what the best players in the past have done that’s in common and seeing how I differ from those things. I’m not trying to copy anybody; I’m just trying to give myself the best chances of being accurate more often.”

Through two rounds here at the Humana Challenge, Cink’s ball-striking numbers are encouraging: 17 of 28 fairways, 30 of 36 greens. But the most important statistic: 3, the number of strokes by which he trails 36-hole leaders James Hahn and Roberto Castro.

“I know I can play great golf,” Cink said, “and I haven’t shown that over the past few years, I’ve disappointed myself. If I’m just myself, I’m going to be fine.”