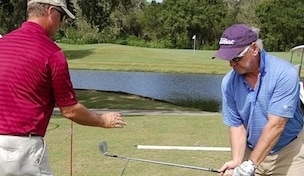 Getty Images
CITY OF INDUSTRY, CA - MARCH 27: In-Kyung Kim of South Korea hits her tee shot on the ninth hole during the final round of the Kia Classic on March 27, 2011 at the Industry Hills Golf Club in the City of Industry, California. (Photo by Scott Halleran/Getty Images)  -

One of the biggest losses of speed in the golf swing is a throwing motion of the clubhead on the downswing. Some would refer to this as “casting.”

Too often, I will see a player hinge the club with their hands and wrists way too early in the takeaway and then on the way down they throw the clubhead outward in a feeling of generating speed.

From a face-on view, the golf swing makes a circle. The clubhead starts at the bottom of the circle, goes back and up to the top, comes down, and then back up again. The image the player wants is to have the arms extended halfway back to give the swing some width, creating a wide circle on the backswing.

On the downswing, as the lower body starts forward, the clubhead halfway down should be on a much narrower circle. What this tells us is that the player is bringing the hands toward the ball and the hands are leading the way instead of the clubhead being thrown from the top of the swing to start down.

When a player throws the clubhead they not only lose a lot of speed but directional problems also will occur.

Try this drill to eliminate a cast:

Set up to the ball and let your arms naturally swing the club to the right without consciously hinging the club (let the wrists naturally hinge) until the clubhead is waist high.

Put an alignment stick or broken shaft in the ground to mark where the clubhead was going back. Then swing to the top and slowly start down until the club is again waist high.

The clubhead should be inside (or closer to you) of where it was on the backswing. If the clubhead is in the same spot or even farther away, you have cast the clubhead way too early in the downswing.

Practice getting the hands to bring the grip down toward the ball instead of the wrists releasing the clubhead at the top.

In summary, picture drawing a wide circle with the clubhead going back and drawing a smaller circle inside of the big one coming down to help store power until the last explosive second at impact!