It’s an epic year for Suzy Whaley, who will make more history for women in the game later this year when she becomes the first female president of the PGA of America.

Whaley will be among 120 players teeing it up in Thursday’s start to the inaugural U.S. Senior Women’s Open at Chicago Golf Club, an opportunity for women over 50 to pursue another USGA Championship.

Some of the greats of the women’s game have lobbied for years for the chance they’ll get this week.

“It’s incredibly exciting,” said Whaley, who played the LPGA for two years before turning her passion for the game to teaching. “It shows the golf business is evolving, that women’s golf is evolving as well. I certainly have a passion for that with the PGA of America. It’s a moment of time I’m thrilled to be a part of.”

Whaley will join the most democratic event in women’s golf, with nearly half the field earning its way through sectional qualifying at 17 sites. Whaley was among those qualifiers, earning one of five spots available at The Olympic Club outside San Francisco.

Whaley will join some of the game’s all-time greats on one of America’s most important venues. The Chicago Golf Club is among the USGA’s five founding clubs.

“I want to thank the USGA for stepping up to the plate and showing the women the respect they deserve,” said Stacy, a three-time U.S. Women’s Open champ. “It’s been a long time coming. We could have all been sitting at that bitter table of one, but we look at this as a new beginning for all of us. We’re all excited to play in Chicago at such a great golf course.”

Carner, 79, an LPGA and World Golf Hall of Famer with 43 LPGA titles, will join Stacy and Palmer Thursday in the first group off the first tee at 8 a.m. ET.

“It’s an inaugural event, so you have to wonder how it’s going to be, but it’s the real deal,” Davies said Wednesday. “I think the USGA has done the players proud, and, hopefully, now we will do them proud with our performance on the course.

The U.S. Senior Open for men has been ongoing since 1980.

USGA leadership is on record saying they commissioned studies to determine if sufficient demand would sustain a senior women’s event, and they finally determined it did.

Inkster, whose five USGA titles include two U.S. Women’s Opens, noted that the window to play this event has passed for a lot of the game’s greats, that players like Kathy Whitworth didn’t get the chance. Count Nancy Lopez in that group this year. Recovery from a knee replacement surgery is preventing Lopez from playing this week. Still, Inkster is relishing the chance the USGA is giving her and everyone else this week.

“We do have a lot of the good ones here, Pat Bradley and JoAnne Carner, my idols, and Betsy King,” Inkster said. “These are the players I looked up to.

“We work hard on our games, just like the guys. We put a lot of time into golf, and to have the opportunity to win a USGA championship as a senior would be amazing.”

Whaley is the PGA/LPGA director of instruction for Suzy Whaley Golf in Farmington, Conn. She knows something about breaking barriers. Her move into the PGA president’s position in November will be another significant gain for women in golf.

Back in 2002, Whaley won the PGA Connecticut Section Championship, which earned her a spot in the ’03 Greater Hartford Open, making her the first woman in 58 years to compete in a PGA Tour event. In ’02, she also became the first female PGA member to compete in the PGA Professional Championship.

When Whaley was elected the PGA secretary at the association’s annual meeting four years ago, becoming the first female officer in PGA history, it put her on track to become its first president.

So Whaley’s place in the U.S. Senior Women’s Open brings her more than another chance to compete, which she loves. It gives her another platform to elevate a message important to her.

As PGA president, she’s a symbol of growing opportunities for women in golf.

“If I have the opportunity to do that for another woman, to inspire her and empower her to be a part of governance for the PGA of America, then I am thrilled to assume that role.”

And thrilled to be a part of history at Chicago Golf Club. 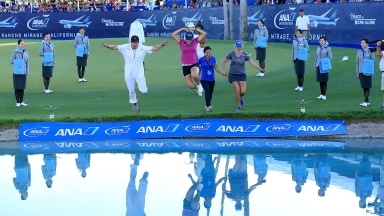 Dinah Shore and the legacy of Poppie's Pond

Amy Alcott took the first victory leap into Poppie's Pond, 30 years ago. But it was one three years later, with host Dinah Shore, that cemented a tradition. 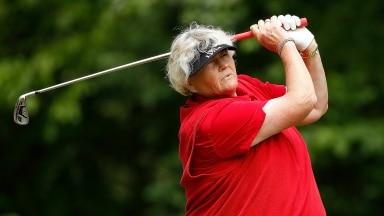 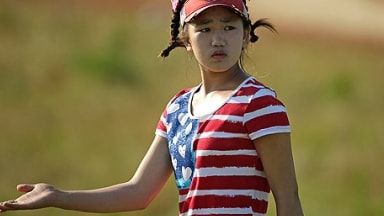 At just 11, Lucy Li commanded the spotlight with a 78 in her Women's Open debut.