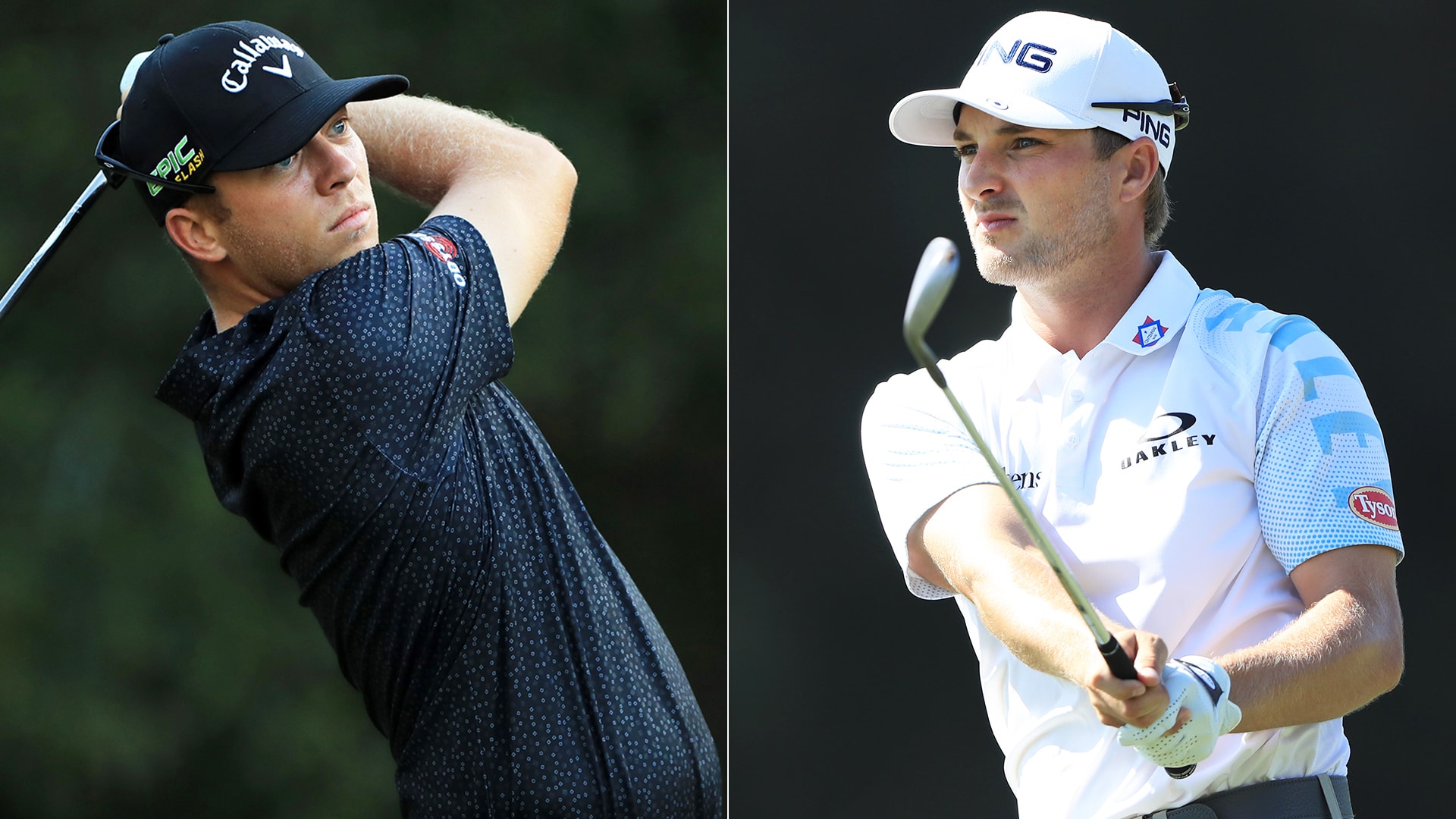 HUMBLE, Texas – Austin Cook and Talor Gooch shot 8-under-par 64s Thursday to take the lead after the first round of the Houston Open.

Cook, who tied for 11th as a Monday qualifier in 2015 when the tournament was played the week before the Masters - its calendar slot until 2018 - shot a career-best 29 on the front side. The 28-year-old golfer from Arkansas returned to the clubhouse having hit every one of the 18 greens in regulation, another career first.

"It's definitely nice to get out and have a great round in the first round," Cook said, before expressing frustration with his recent missed cuts lately because of "iffy ball-striking" on his part and far too many low scores around him. "A few of (the missed cuts) were by one shot. Last week (the cut in Las Vegas) went to 5-under. I wasn't expecting that."

The PGA Tour returned to the Houston area after an 18-month hiatus without much star power - the highest-ranked player in the field for the season's fifth fall start was Sweden's Henrik Stenson at No. 37 - but plenty of good play. There were 13 players under par by at least five shots.

Gooch matched Cook stroke for stroke and tied the low round of his career with a career-best 10 birdies, and he also saved one of his pars with a career-long putt of more than 63 feet.

"Any time you have double-digit birdies you're doing something right," Gooch said. "I drove it well, got the ball in the fairway, hit a lot of good iron shots and was able to make a few putts. It was a fun day."

Cook and Gooch hold a one-stroke lead over Sepp Straka. The 26-year-old Austrian's 65 included a run of four successive birdies after he turned the corner.

"The putter was hot today and I was able to hit some irons shots in there close," Straka said. "I'm really pleased."

Especially because, like Cook, he'd missed three cuts in a row before seeking redemption in Houston.

Russell Henley, Lanto Griffin and Tyler McCumber are lurking after 6-under 66s, and the five-man group at 67 includes 20-year-old Houstonian Cole Hammer, the second-ranked amateur in the world. The University of Texas sophomore couldn't have made his regular PGA Tour debut more memorable, becoming one of just nine amateurs to birdie at least eight holes in a round on tour since 1996. Only Ty Tryon has managed more, making nine in the 2001 B.C. Open.

A U.S. Open qualifier in 2015 when he was only 15, Hammer had insisted Wednesday he wouldn't be the least bit intimidated squaring off against the pros on the course he has played many times, going back to the age of 10. After starting on the back nine, he double-bogeyed No. 11, a gaffe he called ''unnerving.'' But Hammer rebounded with a birdie and later finished the back side with three in succession. After another birdie followed on No. 2, a bogey on the next hole would his only front-nine hiccup.

Also in at 67 was Braden Bailey, a collegian playing for Baylor as recently as last spring who like Hammer, received a sponsor's exemption and is making his PGA Tour debut. He eagled the second hole.

Zhang Xinjun of China was the only afternoon starter to shoot at least 5-under with conditions becoming breezier because of an approaching cold front that will drop temperatures dramatically for Friday's second round.

As for Stenson, a two-time runner-up here, he has eight strokes to make up and is in danger of missing the cut after his par 72. Collectively, the 13 players in at 67 or better have won only 10 PGA Tour titles, and half of those belong to Nick Watney, who last claimed one in 2012.

Gooch downplayed the lack of star power on the grounds, which hadn't been visited by the touring pros since March 2018.

"That's just a talking point (for the media)," he said. "There are still some of the best players in the world here. You can't just go and shoot a couple rounds in the 60s and think you're going to win this thing."