Tears of joy, and relief, for Ko in emotional victory 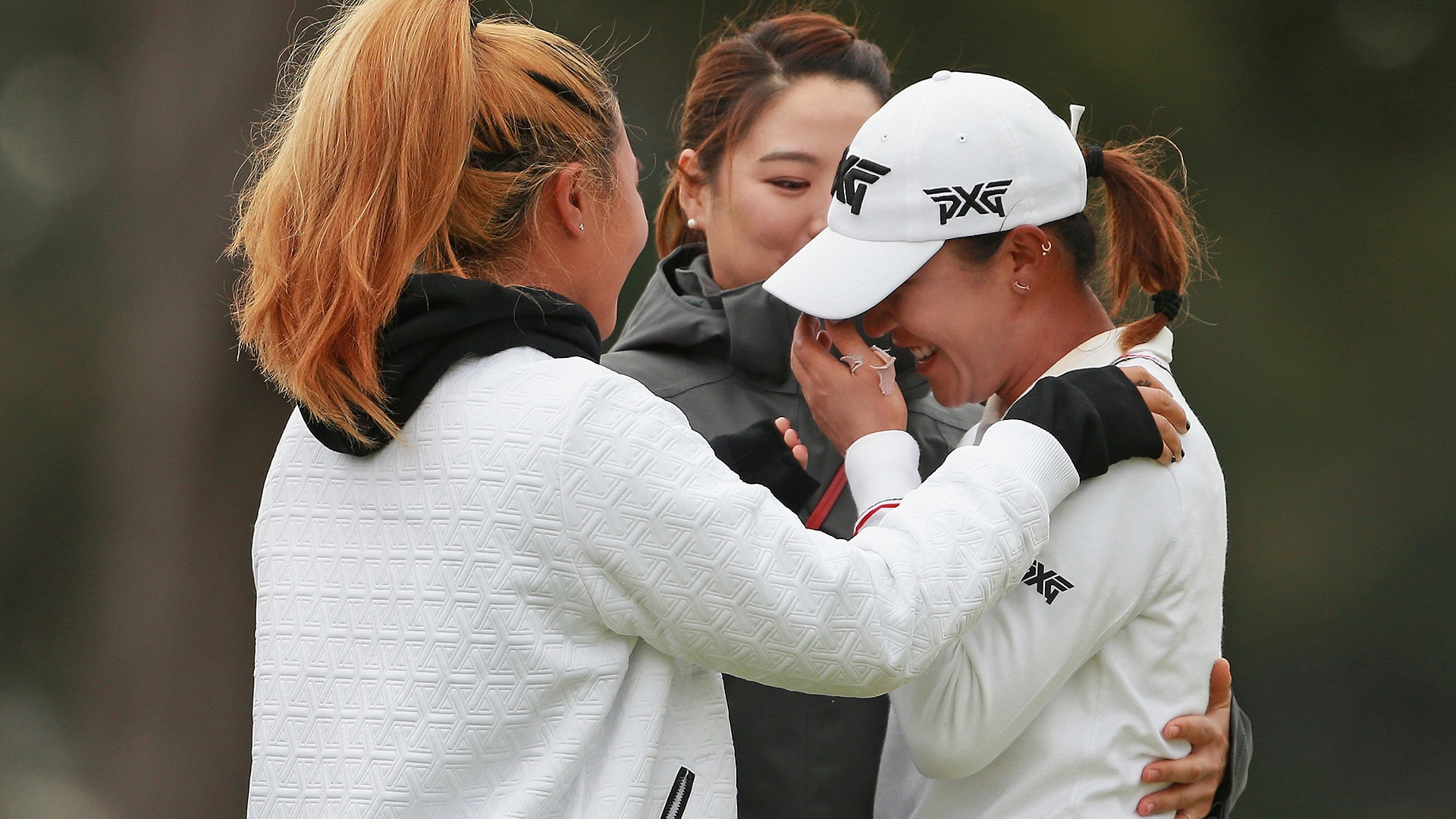 That changed Sunday on the outskirts of San Francisco.

Her victory at the Mediheal Championship wasn’t the most historic of Ko’s already remarkable career, but it was easily the most emotional of her 15 LPGA titles.

She couldn’t stop the river of tears streaming down her face after she made eagle to defeat Minjee Lee on the first playoff hole with an epic 3-wood she described as the best shot of her life.

She cried when her older sister, Sura, fell into her arms on the 18th green.

She cried when she turned and saw her mother, Tina.

She cried when she saw her swing coach, Ted Oh, wiping away his own tears, and when her caddie, Jonnie Scott, hugged her.

“I cried like four times in the span of two minutes, which is kind of embarrassing,” Ko said. “I’m like, ‘God, get a hold of yourself.’”

The tears were the story at Lake Merced Golf Club.

Relief, joy and gratefulness broke the dam of Ko’s heart.

The strength of those emotions revealed the depth of the struggle she waged, fighting through all the doubt and frustration that built in the first slump of her career. She cried seeing the faces that believed in her through the 21 months and 12 days since her last victory.

“I think it was emotional, because they've been through it with me,” Ko said. “It's not like you're the only one out there. The whole team's part of it, and they put in as much hard work as I have. That's why it's so meaningful.”

Ko, who turned 21 on Tuesday, never knew failure in any depth as a teen phenom. She became the youngest winner of an LPGA event at 15, the youngest man or woman to ascend to No. 1 in the world rankings at 17, and the youngest woman to win a major at 18.

But through all the sweeping changes she began making at the end of 2016, something special started slipping away.

There were conflicting ideas going from her childhood coach, Guy Wilson, to David Leadbetter, to Gary Gilchrist and then to Oh. There were problems when her father started taking her out of Leadbetter’s A-Swing on the Asian swing in the fall of ’16, while Leadbetter was still working with her. There were issues dialing in yardages with new PXG clubs and shafts.

Fans saw it. Media saw it. Players saw it.

“She seemed lost,” Cristie Kerr said after watching Ko hit one wayward shot after another missing the cut at the Founders Cup six weeks ago.

Just this last week, London’s Daily Mail wondered if Ko’s slide all the way down to No. 18 in the world rankings would become a death spiral.

“Have we already seen the best of Lydia Ko?” screamed the Daily Mail headline.

From 234 yards out, with a 3-wood in hand, Ko trusted all the work she and Oh have put into reshaping her swing over the last four months. With their new move, a more one-plane swing, she carved a picturesque draw over the top of the trees at the corner of the 18th fairway, and then she just listened.

The roar around the 18th green told her everything she needed to know.

She nearly holed out.

Her ball landed in front of the green and slowly bounded straight at the hole, sliding a couple inches to the right before settling 2 ½ feet away.

“I am so glad Ted was there to see this,” Ko told GolfChannel.com. “He’s one of the few people who really understood what I’ve been going through.”

Ko said she believed for weeks her new swing was in place. She felt in control on the range and in practice rounds, but there was frustration in not being able to show it in a tournament round.

When her driver and iron play were working, her short game and putting were off. The pieces weren’t coming together.

“I know Ted could feel my frustration, at times, and that he was frustrated, but he is always keeping me as positive as possible,” Ko said. “Before every round, he’s there saying, ‘Hey, you can do this. You’ve got this. Your swing looks good.’”

Oh said he cried at Sunday’s finish because he knew how much work Ko put into making the changes, and how important it was to see success.

“We worked so hard before the season, five days a week, from sun up to sun down, for four weeks in a row,” Oh said. “But the beginning of the year didn’t start the way we thought it would.

“Friends started texting me, saying ‘What’s going on?’ I felt some pressure from that, but Lydia kept working so hard, kept staying patient. I’m telling you, nobody works harder than she does. That’s why I cried. All that hard work finally paid off.”

The day was fittingly a microcosm of the year.

Ko bogeyed three of her first six holes to squander her 54-hole lead, but she kept working, kept smiling her way around a course she had won on in 2014 and ’15.

After making birdie at the 15th, Ko skipped off the green. She was giggling amid the pressure of a dramatic back-nine tussle. She moved a shot ahead of Lee there.

“I was watching her thinking, ‘Wow, she is so confident,’” Oh said.

Oh could sense Ko’s excitement being in control of where her ball was going.

“When you’re playing without fear, you’re just out there freely,” Ko said.

Her driver, so wayward earlier this year, was a weapon again. She hit 12 of 14 fairways. She was in control with her irons, and her short game and putter were as good as they’ve ever been. She chipped in for birdie at the 13th. She nearly chipped in again to win at the 18th, at the end of regulation.

“Everything came together Sunday,” Oh said.

Ko politely explained to media earlier in the week that she quit reading all the criticism of her game, but it didn’t mean she wasn’t feeling increasing pressure to perform.

“I was frustrated,” Ko said. "Because sometimes I would go into a Thursday feeling, ‘Hey, I feel like I can actually play really well,’ and then miss the cut, or shoot over par. Self-pressure is the biggest thing, where you kind of put a lot of load on your shoulders.”

Ko said her mother sensed that.

“My mom actually said, ‘Hey, just clear your mind. Just take all the weight off your shoulders and just go out and play,’” Ko said. “That's what I was able to do this week, which is always nice, when you're kind of playing without fear.”

Ko won in her 44th start since her last victory, since her win at the Marathon Classic in Toledo, Ohio, in July of 2016.

Ko left Lake Merced to continue a celebration of friends that started with her birthday party on Tuesday, the night she forgot to bring her ID and couldn’t get a bartender to serve her. Close pals from her New Zealand homeland, and from South Korea, where she was born, surprised her by flying into San Francisco. They stuck around Sunday to make her victory celebration all the more meaningful.

“I think it's pretty cool that my family is here, and my friends are here,” Ko said, “and we can officially celebrate with alcohol, champagne . . . and remember to take my ID.”