Guan to play with Faldo at Masters Par-3 Contest 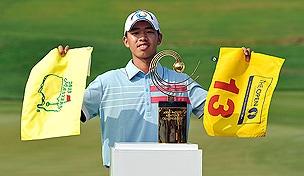 Tianlang Guan will have a three-time Masters champion by his side when he makes his historic appearance next month at Augusta National.

For one day, at least.

The Augusta Chronicle reported Tuesday that Guan, 14, will play with Nick Faldo during the Par-3 Contest on Wednesday of Masters week.

On Tuesday, Guan was presented with the Special Achievement Award in the wake of his victory at the Asia Pacific Amateur. At the ceremony, Faldo shook hands with Guan and told the Chinese teen, according to the Chronicle, “It’s a date. I’m going to start training immediately.”

Since winning the Asia Pacific Amateur in November, Guan hasn’t been able to summon a similar performance on the world stage. He missed the cut after opening with 82 at the Australian Open, finished 19th at the Australian Master of the Amateurs, and never contended in a British Open qualifier.