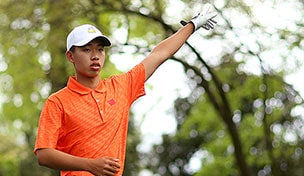 Getty Images
PEBBLE BEACH, CA - JUNE 17: Adam Scott of Australia reacts to missing a putt on the second hole during the first round of the 110th U.S. Open at Pebble Beach Golf Links on June 17, 2010 in Pebble Beach, California. (Photo by Donald Miralle/Getty Images)  -

AUGUSTA, Ga. – China’s 14-year-old phenom Tianlang Guan was assessed a penalty for slow play as he walked to the 17th green Thursday in the second round of the Masters.

Instead of posting a 2-over-par 74, Guan signed for a 75, leaving him 4 over. With leader Jason Day finishing at 6 under, Guan made the cut on the number.

“I am sick for him,” said Ben Crenshaw, who played alongside Guan and Matteo Manassero.

John Paramor, a European Tour official working the Masters, said he talked to Guan four times about slow play before the penalty was assessed. He first informed Guan and his playing partners that they were out of position at the 10th hole. He spoke to Guan again at the 12th tee and gave Guan his first warning for slow play after Guan hit his second shot at the 13th. At the 17th tee, Paramor spoke to Guan yet again. After Guan exceeded the 40-second time limit hitting his second shot at the 17th, Paramor informed Guan beside the 17th green that he was being assessed the penalty stroke.

The low 50 scores and ties and anyone within 10 shots of the lead make the cut at the Masters. Guan finished tied for 55th, but was within the 10 strokes of Day's lead.

Paramor was asked behind the clubhouse if he felt badly about assessing the one-stroke penalty.

'I respect the decision,' Guan said.

How will Guan feel if he misses the cut because of the penalty?