Tiger Woods says arduous journey to St. Andrews Open has 'been worth it' 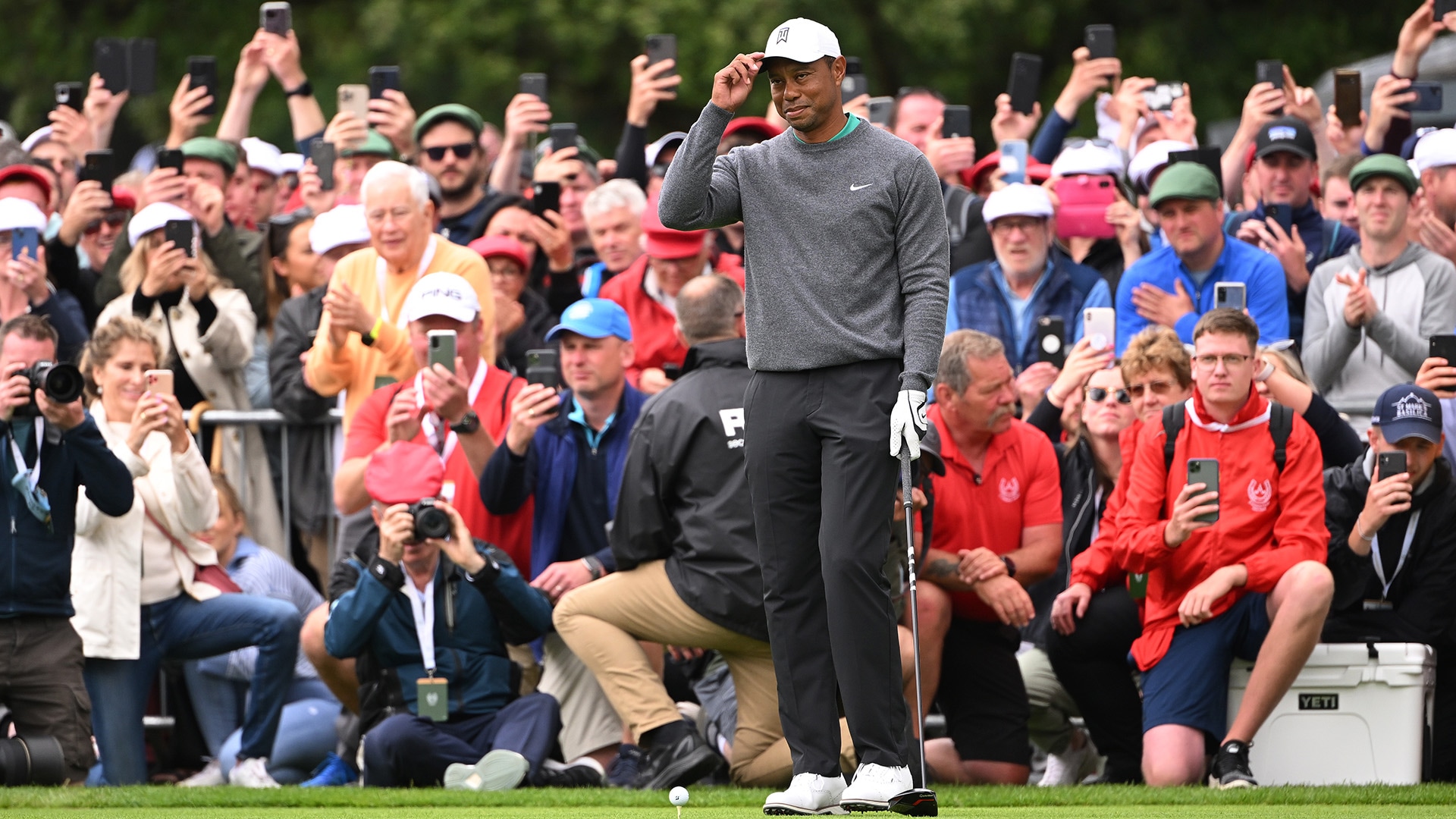 ADARE, Ireland – Against a backdrop of grey skies and an adoring Irish gallery that swelled beyond 35,000 by the time he’d completed his second trip around stately Adare Manor, Tiger Woods returned to center stage.

Last we saw the 15-time major man he was limping, both literally and figuratively, his way to a third-round 79 at the PGA Championship before tapping out prior to the final round.

Woods passed on the U.S. Open, which was no surprise given the championship's proximity on the calendar to Southern Hills. In April, however, he committed to compete in this week's JP McManus Pro-Am, ahead of The Open. It wasn't a surprise, given his affinity for McManus and the posh event, and Woods kept his commitment.

On Tuesday, he was upbeat and forward thinking even while he brushed the rust off a game that looked to be well short of major championship ready.

The rebuilt champion has been clear ever since he returned to competition following last year’s horrific car crash and the countless surgeries that followed. His schedule and whatever is left of his competitive fortunes will be a dramatically scaled-back version of what we’ve historically seen from him.

The majors would be the starting point, followed by the Genesis Invitational and Hero World Challenge, which are both events run by Tiger’s charitable foundation. But as limited as that line up might seem, even that schedule appears overly optimistic.

He did, after all, skip last month’s major.

“The plan was to play the U.S. Open, but physically I was not able to do that. There's no way physically I could have done that,” he said ahead of Round 2 in Ireland. “I had some issues with my leg and it would have put this tournament [The Open Championship] in jeopardy and so there's no reason to do that.”

Although Tiger spoke optimistically about his body and his game as he made his way gingerly around Adare Manor with the aid of a golf cart, it became abundantly clear that his right leg is still a work in progress. As his opening 71 at the Masters in demanding conditions and his second-round 69 at Southern Hills showed, there’s still tread on those championship tires. But the real question is how many miles remain?

“I don't know. I really don't,” he admitted. “If you asked me last year whether I would play golf again, all of my surgeons would have said no. But here I am playing [three] major championships this year.

It was, in retrospect, a wildly refreshing viewpoint from a player who spent the vast majority of his career not allowing himself to glance beyond the moment. It was a unique Tiger tool that allowed him to compartmentalize the avalanche of pressure that comes with being a singular talent – always stay in the moment.

But now, in what he clearly recognizes to be the twilight of his career, perspective can be liberating. Tiger recognizes his limitations, but he’s far from constrained by them.

Perhaps the most encouraging takeaway from Tuesday’s media meet-and-greet was the notion that, despite all his physical restrictions, he still enjoys the process as well as the outcome.

“It's been worth it. It's been hard,” said Woods, a three-time Open champion who has twice won on the Old Course (2000, 2005). “I've had some very difficult days and some days which moving off the couch is a hell of a task, and that's just the way it is.

“I have my own two legs, which I tell you, I'm not going to take it for granted anymore, some people do. But people who have come close or lost a limb understand what I'm saying, but you have difficult days and also you have great days.”

The prioritization of The Open Championship was as calculated as it was convenient. The 150th playing of the game’s oldest major at the Home of Golf would always be worth the effort, but the topographical fact that the Old Course will be the most user friendly of all the courses Tiger plays this year is just as compelling.

This year was always going to be about making it to St. Andrews, but the road to Scotland is a stark reminder of how tenuous Tiger’s schedule will be going forward.

It all promises to be an increasingly limited public view of the game’s most dynamic and compelling player, and why we should all follow the lead of the massive Irish galleries this week and make the most of those moments when we have them.