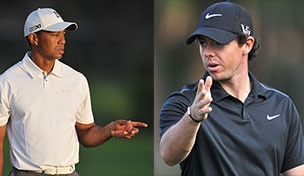 PALM BEACH GARDENS, Fla. – Like two sinking ships passing in the night, Rory McIlroy and Tiger Woods caught a glimpse of each other while packing their belongings in the parking lot after losing in the opening round of last week's WGC-Accenture Match Play Championship.

Too far away to call out to him, McIlroy did what comes natural when he sees his golfing hero, the man whose records the 23-year-old will forever chase.

With a few thumbed keystrokes, the two had set up what McIlroy called 'our own Match Play final,' playing 36 holes at Woods’ home club on Sunday, splitting their two matches in advance of this week's Honda Classic.

Yes, that would be the very same Honda Classic won by McIlroy last year, when he nipped Woods by two despite the latter's final-round 62.

If their pre-tournament hit-and-giggle session raises both questions and eyebrows, that’s to be expected.

After all, Ali never sparred with Frazier before a title fight. Koufax never threw BP to Mays. McEnroe never rallied with Borg for fun on the Wimbledon lawn.

And yet, here are the world's two best golfers, buddying up like they're about to take down the A Flight in the local member-guest.

It's nothing new, of course. Woods won majors by a half-bajillion strokes as a young 20-something; McIlroy followed suit. Woods moved to South Florida; McIlroy joined the neighborhood. Woods plays Nike equipment and wears Nike duds; now McIlroy does, too.

Hell, they've even played two events together this year and left on the same day both times, missing the cut on Friday at the Abu Dhabi HSBC Golf Championship before being ousted on Thursday at the Match Play.

Cue the browbeating – or is it brobeating? – about their bromance turning into a permanent brocation.

It’s a relationship which doesn't sit well with many who believe that rivals should meet with a cold, steely glare and exchange as few friendly words as possible. There are at least two qualified observers, though, who feel differently.

'That has certainly been the case with Jack [Nicklaus] and me,” Arnold Palmer told GolfChannel.com this week. “Good friends who always wanted to beat each other on the golf course – and I think Jack would agree.'

“I don't know many sports that have had a better rivalry than Arnold and I have had,” said Nicklaus, who also counted Gary Player and Tom Watson amongst his rivals. “We've tried to beat each other's brains out the best we could on the golf course. When we walk off the golf course, we shake hands and say, ‘Where you going to dinner?’ That's good. That's [what] we've done all our lives. The rivalry has never become a bitter rivalry, which I would hope certainly that nothing like that would ever be part of it.”

It’s something that Woods and McIlroy have learned already – that rivals don’t necessarily have to be bitter rivals. As Woods surmised on Wednesday, “He's a friend of mine who just happens to be the No. 1 player in the world. That's about it.”

That’s not totally it, though. The truth is, having a rival – friendly or otherwise – has always been an element missing from Woods’ career. Sure, the likes of Phil Mickelson, Vijay Singh and Ernie Els have proven themselves worthy adversaries over the years, but any rivalry between Woods and those players can only be categorized as the hammer-and-nail variety.

Woods has spent his professional life chasing Nicklaus while the Golden Bear lives out his golden years. McIlroy is hunting Woods with his prey not way in front, but literally standing next to him on the course and across from him at the lunch table.

It’s a dynamic which very well may prove healthy for both players, fueling greater motivation to win bragging rights along with the hardware.

“Tiger probably needs somebody to pop him a few times so he gets a chance to go pop it back,” Nicklaus stressed. “I think that's the way all sports work. It's kind of good for you to get drummed a couple times and then all of a sudden you say, 'I'm not getting drummed anymore. I'm going to go drum that guy back.' That's sort of what rivalries are all about. They always want to win and the competition is fierce, so that's good.

If the day comes when Woods reaches Nicklaus’ record of 18 major victories, McIlroy will be watching closely. If McIlroy someday parlays his current total of two majors into a number threatening Woods’ total, he certainly won’t be sneaking up on him.

Like it or not, their relationship is equal parts friends and rivals. That may sound like a foolhardy association, but it’s hardly the first time we’ve seen this in the game. And yes, it’s worked out for the benefit of both players in past circumstances.