JERSEY CITY, N.J. – It’s becoming a familiar routine for Tiger Woods in recent events, struggle on Day 1 and force yourself to perform some sort of magic during the second round just to make the cut.

On Thursday at The Northern Trust it was a 4-over 75 that left Woods tied for 102nd out of 104 players who were on the course at that moment. It was a similar performance to last month’s Open Championship, where he started his week with a 78, and the PGA Championship, when he opened with a 72. He missed the cut at both events.

“I'm going to have to figure out a way to get this thing under par and hopefully move on and have a chance on the weekend to keep progressing and keep going lower,” Woods reasoned after his round. “I've got to get into the red at the end of the day tomorrow, for sure.” 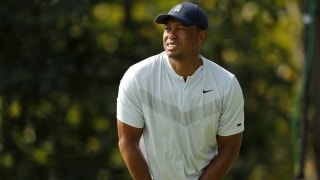 It was another uninspiring performance from Tiger Woods Thursday at The Northern Trust. Here are my observations after a 4-over 75.

But for Woods, this is much more than another poor first round. Given his precarious position on the FedExCup point list (28th), he will need to have decent starts in the first two playoff events to assure a return trip to the Tour Championship, where he would be the defending champion.

Following his round on Thursday at Liberty National, Woods was projected to drop to 32nd on the point list.