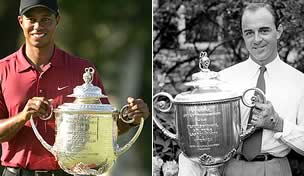 If he wins the Masters this week, Tiger Woods will become the PGA Tour’s all-time victory leader.

That’s my story and I’m sticking to it – even if the PGA Tour doesn’t agree.

According to the official record books, Woods’ total of 77 career wins places him five behind Sam Snead’s 82, but numbers alone don’t tell the entire story.

If that sounds inconsistent, it should – especially when you consider that neither of Woods’ team victories in the World Cup, nor his Presidents Cup wins nor that lone Ryder Cup triumph nor even any of his eye-rolling success in the Tavistock Cup (hey, it’s a “recognized” event by the PGA Tour, just not an “official” one) are part of the overall tally. Hell, he doesn’t even get to count the four trophies from his eponymous World Challenge – and he didn’t have any partners helping with those.

So why does Snead get credit for his team victories while Woods doesn’t? Glad you asked.

Since the PGA of America – which was the governing body over all professional events prior to the PGA Tour – was formed in 1916, a total of 62 team events were contested and considered official through the 1981 season.

About 25 years ago, the PGA Tour commissioned a blue-ribbon panel – though debate looms as to whether it was more blue than ribboned – to examine which events would remain official and which would be stricken from the record.

“On some of these,” explains PGA Tour executive vice president of communications Ty Votaw, “there was no guiding, absolute standard that applied to these things, other than to say if it was an official event recognized by the PGA of America in their media guide or on their official schedule.”

Because the panel deemed these 62 team events to be official, Snead maintains a 5-up lead over Woods in the race to history.

Of course, it’s not only Snead whose partnered wins boosted his total. Jack Nicklaus counts two team titles among his 73. Arnold Palmer also has two among his 62. And Ben Hogan owns eight team victories among his 64 on the official ledger.

There are also, as to be expected, plenty of other gray areas surrounding Snead’s overall number. While the panel allowed his five team wins, it likewise removed eight other victories that it considered unofficial based on the specifications. His 1946 Open Championship wasn’t considered sanctioned until just over a decade ago. And one of his wins – the 1950 Bing Crosby Pro-Am – was concluded as a four-way tie for the title with three others.

“We’ve looked at it subsequent to that,” Votaw says of the panel’s examination, “and we feel pretty good about the 82 number.”

Even so, it’s a number which has come under more scrutiny in recent years, with Woods edging ever closer to Snead’s official record.

“We examine it all the time,” Votaw continues. “Every time Tiger has gone toward this, we’ve looked at them. There are some examples where reasonable minds could differ. There could be some debate.”

In fact, just last year a footnote in history was rewritten. Somehow the winners of the 1972 National Team Championship – the venerable Kermit Zarley and Babe Hiskey, as if you didn’t know – weren’t credited with an official victory, even though their predecessors in the same event were. And so the wrong was righted, with Kermit and Babe taking slow play to the next level, needing 40 years to win a PGA Tour event.

Maybe 40 years from now, archeological researchers will unearth a time capsule that includes DVDs – remember those old things? – showing Woods’ team victories. They’ll count up the World Cup and Presidents Cup and Ryder Cup and – commence eye-rolling – even the Tavistock Cup wins and adjust his total to a number that is even further out of reach for future generations.

Or maybe we won’t have to wait that long. Instead, maybe Snead’s five team titles will be deemed unofficial for the simple fact that golf at the professional level is an individual pursuit.

One of the beauties of the game is that the head-to-head, every-man-for-himself quality has withstood for centuries. There are no teammates in golf. There are no others – save for caddies -- on whom a player can rely for assistance. Obviously there is a place for team competitions, but that place doesn’t belong among the overall total of a player’s professional victories.

Keep that in mind as you watch Tiger Woods this week. A win would be the 78th of his career, giving him sole possession of the all-time PGA Tour individual victory total – even if the PGA Tour doesn’t recognize the accomplishment.