Tiger confirms he and Jack don't speak much 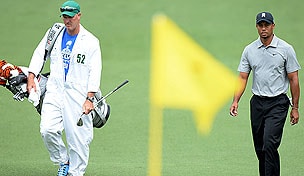 AUGUSTA, Ga. – After Jack Nicklaus joined Arnold Palmer and Gary Player on the first tee just past daybreak at Augusta National for the ceremonial first tee shot, the six-time Masters champion shed some light on his relationship with Tiger Woods.

“I never really had a conversation with Tiger that lasted more than a minute or two – ever,” Nicklaus said. “He stayed away from me from a conversation standpoint. Never had a conversation on the Masters in general. I’ve said, ‘Hello, how are you doing? Nice playing this year. You’ve played very well.’ End of conversation. People ask me, ‘Has Tiger ever talked to you about his record?’ Never one word.”

Nicklaus said he respects Woods’ decision to figure things out for himself and that the man most often linked to the Golden Bear’s record of 18 major championships hasn’t seemed to need much advice.

Nicklaus: 'Never really had a conversation with Tiger'

Woods played on four Presidents Cups teams that were captained by Nicklaus, who once asked Woods about his relationship with Phil Mickelson.

On Thursday following his first-round 70 at the Masters, Woods was asked about his relationship with Nicklaus and how often they talk.

“We have had more conversations at the Presidents Cup and at the Memorial (Nicklaus’ tournament in Ohio), but he’s right. We haven’t spent that much time together,” Woods said. “At tournaments, like this week, it’s tough and he knows that.”