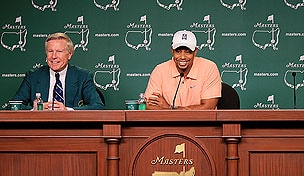 AUGUSTA, Ga. – Tiger Woods hasn’t played a PGA Tour event in two weeks. Last we saw him on the big stage he won the Arnold Palmer Invitational for this third victory of the year, one that vaulted him back to No. 1 in the world for the first time since late 2010.

The next morning Nike released an ad campaign with an image of Woods and an accompanying quote saying “winning takes care of everything.” The quote is something Woods has said repeatedly over the years in reference to his on-course performance.

Only this time, critics jumped on the message, saying that a failed marriage and a serial infidelity scandal prove that winning does not take care of everything.

“That’s something you guys have asked me about,” Woods said Tuesday at Augusta National. “What does it take to become No. 1, Player of the Year, money total and all that?

“That was an old quote that Nike put out there and people jumped on it. But that’s something that I’ve said since I first turned pro.”