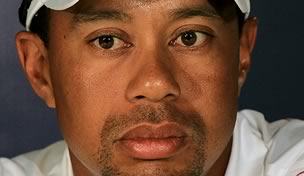 Getty Images
GUADALAJARA, MEXICO - NOVEMBER 16: Lorena Ochoa walks through the crowd to the 4th hole during the final round of the Lorena Ochoa Invitational at Guadalajara Country Club on November 16, 2008 in Guadalajara, Mexico. (Photo by Hunter Martin/Getty Images)  -

PONTE VEDRA BEACH, Fla. – Tiger Woods must feel as if he’s always playing with the wind in his face.

The scrutiny of Woods’ swing changes comes like gusts, intermittently blowing into his world.

It isn’t exactly coming from a bunch of schmoes, either. The analyses above have come in the last month from Lee Trevino, Butch Harmon, Johnny Miller, Nick Faldo, Brandel Chamblee and Peter Alliss.

The winds are up again this week as Woods prepares for Thursday’s start of The Players Championship. Since his win at the Arnold Palmer Invitational, he has struggled at the Masters and missed that cut last week at the Wells Fargo Championship. It has refueled the sharp-edged analysis.

In an NBC/Golf Channel conference call Tuesday, Faldo reiterated his belief that Woods’ bid to return to his best form is more a mental than physical challenge.

“The real bottom line is he just doesn't have the self-belief, the self-confidence that he obviously had, the Tiger of old, simple as that,” Faldo said.

“The practice swings are so contrived, and so exaggerated, so he's just making life hard work for himself,” Faldo said. “He's fighting to find a feel.”

“He won at Bay Hill, and everyone, including myself, thought, `Wow, he's back,’ and all of a sudden, at the Masters, his nerves just went off the red line, and he basically succumbed to the pressure of the Masters,” Miller said. “I think that really affected him. I think that was a shock to him that he went from the top of his game to, just like that, `What the heck is going on?” And it really made him very human. That was very difficult for him psychologically, I think. The Masters really hurt him, especially after you saw what he did at Bay Hill.

“It's a piece-by-piece thing. He has to rebuild the confidence that he had at Bay Hill and see if he can start building back up again.”

Chamblee, speaking on Woods’ work with Foley, bluntly offered up his fix.

Taken cumulatively, the scrutiny feels like a formidable force working against Woods. In days of old, he would use it all as motivation, as fuel feeding his fire. He made critics pay. He did it winning. In Tuesday's news conference, he was undaunted.

What’s he think of speculation his self-belief is dented?

“I always find it interesting since they’re not in my head,” Woods said. “They must have some kind of superpower I don’t know about.”

Woods showed the patience Tuesday he would like the rest of us to have with his swing changes.

“What I had done at Bay Hill, no doubt, I had been creeping up towards that,” Woods said. “Unfortunately, the last two tournaments I played in weren’t that great. So, no big deal. We’ll just continue working and try and put it together this week.”

Woods acknowledged it’s a possibility he might be too mechanical right now.

“Well, certainly it is, when you’re making swing changes,” Woods said. “Guys, I’ve done this before. I’ve been through this.”

Woods has been through swing changes before, but the mounting analysis, the skepticism and doubt he’ll master the changes are more formidable than he endured making his first two swing changes. Foley sensed as much last month, asking critics to back off and drop the daily referendums.

“It takes a little bit of time, and I keep building and eventually things come around to where they feel natural and efficient,” Woods said.

In the meantime, Woods will have to make his swing changes with a wind that feels as if it’s always blowing in his face.