Woods expands on relationship with Garcia 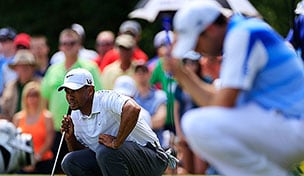 Getty Images
VIRGINIA WATER, ENGLAND - MAY 18: Marcel Siem of Germany poses for a portrait during prior to the BMW PGA Championship on the West Course at Wentworth on May 18, 2010 in Virginia Water, England. (Photo by Warren Little/Getty Images)  -

When asked during a press conference Monday if he felt compelled to clear the air with Sergio Garcia over their war of words at The Players Championship, Tiger Woods had a short but comprehensive reply.

Following the Q & A session with media members, though, Woods did expand somewhat on his thoughts regarding a relationship with the Spaniard that turned icy at TPC Sawgrass.

'Sometimes, I'm sure you have it at your work, where you don't get along with everybody,' Woods explained in an interview with Chick Hernandez from CSN Washington. 'This is an example of that.'

Tiger: No desire to clear the air with Sergio

Garcia: 'Not afraid' of Woods

During a week that revolved as much around what was said off the course as how players performed on it, Woods won his second title at the Stadium Course by two shots after Garcia faltered across the final two holes. In looking back on his most recent start, the 14-time major champion insisted that who he defeated didn't make the win any sweeter.

'It's just a matter of winning. I was tied for the lead going into the final round, and it's a big event,' he added. 'Whether it was Sergio or somebody else ... I still had to execute.'

Click below to view video of Woods' comments in their entirety: