Woods fires back at Chamblee and Faldo 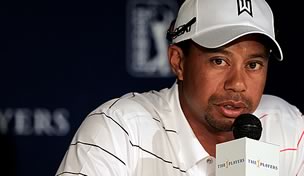 'Simply, he needs to fire Sean (Foley), call Butch (Harmon),' Chamblee said Tuesday during a media call ahead of The Players Championship. 'I think that would get it done right there.'

Asked to react to Chamblee's game plan during his news conference, Woods said, “I can understand that everyone has an opinion, and he's entitled to his. But he's no longer playing anymore, so, so be it.'

Woods missed the cut last week at the Wells Fargo Championship. He has one PGA Tour victory since teaming with Foley at the 2010 PGA Championship.

'I think if you're a player, we've all gone through this,' Woods said. 'You're not going to play well every week.'

Woods' go-to descriptor was uttered three times Tuesday, as many times as he has rebuilt his swing. By his estimation, it took two years with Butch Harmon, 18 months with Hank Haney and is nearing another two years with Sean Foley to fine-tune swing changes.

Nick Faldo, meanwhile, believes Woods may be lost in the forest of his own mind.

'The real bottom line is for me, (Woods) just doesn't have the self-belief, the self-confidence that he obviously had, the Tiger of old, simple as that,' Faldo said during the media call.

Woods’ response:  'I find it interesting since they're not in my head. They must have some kind of superpowers I don't know about.'