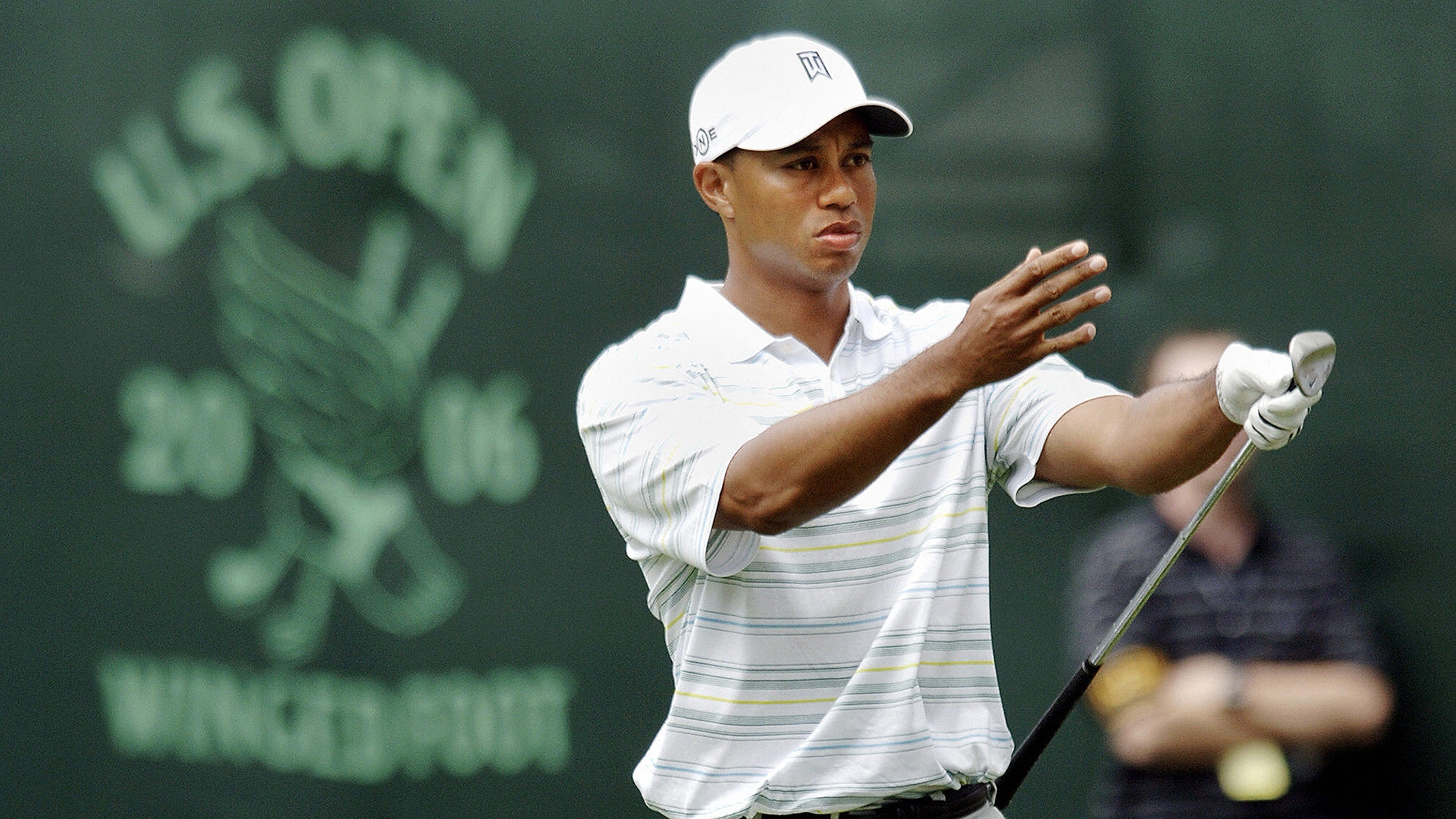 MAMARONECK, N.Y. – Sunday, someone will raise the U.S. Open trophy and will likely pay homage to their father. But it won’t be Tiger Woods.

Woods shot his second straight 6-over 76 Friday to assure him of the weekend off for the first time in 38 major championships as a professional.

After a couple of months’ worth of personal turmoil, this one had to sting, at least on a professional level.

"He’s not God." Those were the words of one fan after seeing Tiger’s score as he played his final hole in the second round, his final hole of the tournament, the par-4 ninth.

No, he’s not God. If he was, he probably wouldn’t take his own name in vain, like when he did after pulling his tee shot into the rough on the par-5 fifth.

By that time, Woods was already 10 over par for the championship, 4 over for the day. He made a pair of double-bogeys over his first seven holes on Friday, and offset a birdie at the 17th, his eighth hole of the day, with a bogey at the fourth.

That bogey was ultimately the beginning of the end for Woods. He had made some incredible par saves to start his second nine and remain at 9 over, and then pured his tee shot on the par-4 fourth.

"Holy sh*t! That must be 320, 330 (yards)." Those were the words of another fan who witnessed Tiger’s massive drive split the center of the fairway, at least 20 yards farther than his playing competitors, defending champion Michael Campbell and reigning U.S. Amateur champion Eduardo Molinari. 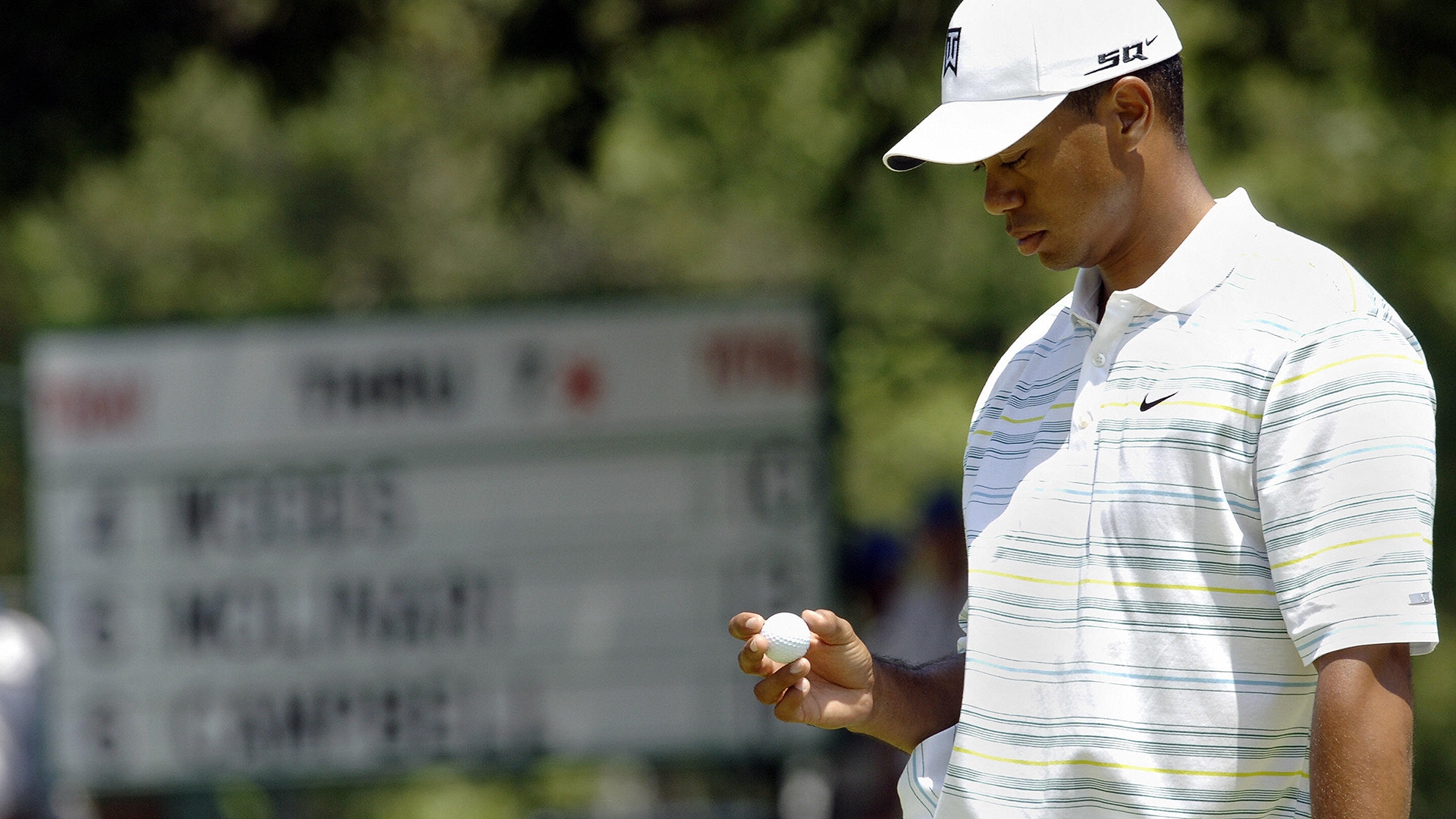 For the better part of 12 holes, Woods had been scrambling to save par – and even to try and salvage bogey. Now he had a chance to make just his fourth birdie of the tournament and give him a chance to hang around for the weekend. Instead, he pushed his approach to the right, 35 feet from the flag; knocked his birdie putt 8 feet past; and then two-putted from there to dig his hole a little bit deeper.

That dropped him to 10 over and put him in grave danger of missing the cut. The last noticeable scoreboard, a few holes back, showed Steve Stricker leading the way at 2 under. And with the top 60 and all those within 10 strokes of the lead making the cut, Woods had to make a big move in a small amount of time.

"He could be in trouble if Stricker stays at 2 (under)."

The fans on the second hole were right; Stricker didn’t stay at 2 under. In fact, he bogeyed his 16th and 17th holes of the day to fall back to even par, making Tiger’s 10 over total, at the time, the cut line.

Woods’ errant drive at the 515-yard, par-5 fifth led to another scrambling par. Every time a window of opportunity seemed to open for Woods, he managed to shut it on his own hands.

At the par-4 sixth, a hole measuring around 320 yards, Woods selected driver, much to the delight of the crowd. He then proceeded to hit it about 40 yards off line and to the right.

Before he could flop his second shot over the gallery and onto the green, the scoreboard near the sixth green made a change. Stricker’s score was removed.

And then came a huge groan. Stricker had birdied his final hole to post 1 under. Tiger’s 10 over was no longer good enough to cut it.

He managed to save par on No. 6, meaning he needed at least one birdie over his final three holes to make it. Whether or not Tiger knew that for fact or not as he approached the tee on the seventh is not clear. But the expressions on the group’s collective faces left nothing to the imagination as to where they stood in the championship. Combined, the three men were at 31 over – and they looked it.

Woods definitely knew where he stood by the time he reached the seventh green. Having placed his approach shot – from the fairway for once – 20 feet right of the hole, another scoreboard stood off the left, staring right into the eyes of Tiger.

“I knew if I made one birdie coming in and a couple of pars, the 10-shot rule would get me in,” he admitted post-round.

He missed that putt, however, and went on to bogey both Nos. 8 and 9 for a game-ending, 12-over-par total.

"Gas up the jet" – one fan’s comment off the eighth green.

"He’s pissed "– the words of another fan along the ninth fairway. To which his friend replied, "I would imagine; he’s not used to this."

That he’s not. This is a first for Tiger, missing a cut in a major championship as a professional. But, in general, it’s becoming more commonplace. After finishing in the money a record 142 straight times on the PGA Tour, he has missed the cut in three of his last 18 stroke-play starts on Tour.

“Pissed,” replied Woods when asked his emotional state after the round (good call by the fan). “That pretty much sums it up right there. I thought I was playing well enough to shoot an under-par round today, and I didn’t do that.”

Said Campbell, who also finished at 12 over, “Toughest conditions in the world at a major championship, the first time coming back after two months off, his father passing away – I mean, God, you’ve got to give him credit for actually turning up.”

“He’s pretty focused, but the intensity wasn’t there as it normally is,” Campbell added. “I actually felt that as a player playing next to him.”

Next up for Woods is likely the Western Open, an event three weeks from now and two weeks before the British Open. It’s an event he’s won three times and will probably be his lone start before he heads to Royal Liverpool to defend his Open crown.

Between now and then? “Practice,” Woods said.

This one doesn't come as a total shock, considering that he hasn’t played competitively in nine weeks. And while he won’t admit to his game being rusty, there is a huge difference between practicing and playing at home and competing when the shots count – on a U.S. Open setup, nonetheless.

He continued Friday to blame his inability to adjust to the speed of the greens on the West Course, greens he deemed slower than usual on a U.S. Open layout. He took 30 putts in Round 2, along with 33 in Round 1.

But what really stood out over the two days was his poor driving. On a course in which rough measured well over 6 inches in spots, on a course where you simply cannot miss fairways and be successful, Tiger did … and he wasn’t. Woods hit four of those narrow, 22-28-yard fairways Friday, giving him a grand total of seven hit fairways through two rounds.

That greatly contributed to him hitting only 50 percent of his greens in regulation –10 of 18 on Thursday, eight of 18 on Friday.

The fan on the first hole was right, but playing for the first time since the death of his father, Earl, on May 3, may have had little to do with this result. And if it did, Tiger would never admit it.

“What’s transpired off the golf course, I don’t know if it gives you a different type of perspective. But I don’t care if you had what transpired in my life of recent or not, but poor execution is never going to feel very good,” Woods said.

“I’ve gone, I guess a while without missing one,” he added. “Unfortunately, I missed this one. Hopefully, I can win the British.”