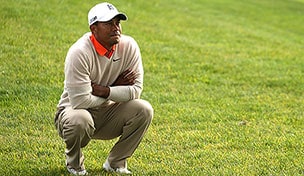 SAN DIEGO – Between a wobbly start and a wobbly finish, Tiger Woods looked awfully sturdy Thursday in the first round of the Farmers Insurance Open.

Through the middle of the round, he looked like a guy poised to reclaim Torrey Pines as his sovereign land.

Yes, there was rust to be worked off in his 4-under-par 68 on the South Course, but there were plenty of signs he still might own this place.

Despite a double bogey at the fourth hole, and bogeys at two of his final four holes, Woods moved into a tie for 20th, three strokes off the lead, in his bid to win his eighth professional title at Torrey Pines. He has the easier North Course to contend with Friday.

Woods’ 68 was good for a tie for fifth among those playing the more beastly South Course.

“I’m happy with it,” Woods said. “I made a few mistakes out there, but I made some nice plays as well.”

With defending champ Brandt Snedeker off to a fast start with a 65 on the North Course, with Woods not having worked any magic here in nearly five years, nobody’s looking over his shoulder yet to see where Woods is lurking.

“He has won here more times than I’ve won on Tour,” Snedeker said. “So, I think he knows this place pretty well, and I think he’s very similar to me. He loves putting on these greens. The greens, once you have a feel for them and you get rolling on them, you can make a lot of putts. He’s got that feel for them, but we’ve got three more days to go. There are 155 guys I’m still worried about besides him. So, we have a lot more guys to worry about.”

Woods won twice at Torrey Pines in 2008, claiming this event and the U.S. Open, but he hasn’t made another mark here since. He missed this tournament in ’09 recovering from injury. He missed in ’10 rebounding from his personal troubles. He struggled to a tie for 44th in ’11 and skipped the event last year to play Abu Dhabi.

In Thursday’s round, Woods looked comfortable, blistering some monster tee shots with a driver he looked awfully confident hitting. He consistently bombed drives past playing partners Nick Watney and Rickie Fowler. He hit five consecutive fairways in the middle of his round. Though he hit only seven of 14 fairways overall, there were no big misses with the driver. He hit 13 greens in regulation.

Woods looked good with the driver, and he also looked like he was determined to settle a score with the sand, at least sand he could see. A week after missing the cut in his 2013 debut at Abu Dhabi because of a penalty for unknowingly taking an improper drop from a sandy area, Woods was a perfect 4 for 4 getting up and down from the sand at Torrey Pines. He holed a 40-foot bunker shot at the sixth for eagle. He got up and down from a greenside bunker at the ninth for birdie.

In yet another encouraging sign for Woods, he devoured the par 5s. He played them in 4 under with that eagle and two birdies. Woods didn’t dominate par 5s last year the way he traditionally does.

There were rough edges, too.

Woods made a mess of the fourth hole, pulling his drive left, where he got a short iron tangled in gnarly rough and sprayed a wild shot into the gallery way right of the green. He thwacked a spectator between the shoulder blades there. A flop shot and three putts later, Woods walked away steaming after a double bogey.

The mistakes there seemed to spark something in him. Woods thrashed a 341-yard drive down the middle at the fifth, then holed a 12-foot birdie. He holed that bunker shot for eagle at the sixth. He played the five holes after his double bogey in 5 under.

With a 16-foot birdie chance to take a share of the lead at the 14th, Woods couldn’t take advantage. He stumbled home bogeying the 15th after pulling his approach way left. He bogeyed the 17th failing to get up and down from just short of the green.

You could see what you wanted to see in Woods’ round, but there were plenty of signs he’s feeling comfortable at Torrey Pines.