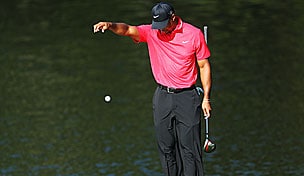 Getty Images
PEBBLE BEACH, CA - JUNE 14: Tiger Woods walks to his second shot during a practice round prior to the start of the 110th U.S. Open at Pebble Beach Golf Links on June 14, 2010 in Pebble Beach, California. (Photo by Scott Halleran/Getty Images)  -

PONTE VEDRA BEACH, Fla. – For the second time in as many starts, Tiger Woods is facing questions about a drop he took during competition.

While the fallout from TPC Sawgrass will likely not reach a fraction of what was seen following “Dropgate” at Augusta National, Woods still had to answer inquiries after the round about the drop he took on the 14th hole Sunday.

Staked to a two-shot lead, Woods hooked a fairway wood into the hazard lining the left side of the fairway. After consulting with playing partner Casey Wittenberg, Woods determined the point at which the ball last crossed the hazard – a point that some felt may have been closer to the hole than the true trajectory of the ball would have allowed.

“I talked to Casey and the caddie, and we agreed that’s where it crossed,” Woods said after the round. “Because I hit a pop-up big high hook, so it started way right and then it went way left. We decided it crossed there, and I played it.”

Woods went on to make double bogey and forfeited sole possession of the lead, a position that he would not reclaim until the 72nd hole. In speaking with reporters following his round, Wittenberg agreed with Woods’ assessment of the situation.

“I saw it perfectly off the tee,” explained Wittenberg, who tied for seventh after a 3-over 75 Sunday. “I told him exactly where I thought it crossed, and we all agreed.”

Wittenberg reiterated that Woods actively consulted with him in order to determine the point where the ball last crossed the hazard.

“We talked to each other,” he said. “I told him I thought it crossed on the corner of the bunker right where he took his drop.

“There is no doubt, guys,” Wittenberg added. “The ball crossed where he dropped.”

Following the conclusion of play, the PGA Tour released the following statement regarding the situation:

'Without definitive evidence, the point where Woods' ball last crossed the lateral water hazard is determined through best judgment by Woods and his fellow competitor,” the statement read. “If that point later proves to be a wrong point (through television or other means), the player is not penalized by Rule 26-1 given the fact that a competitor would risk incurring a penalty every time he makes an honest judgment as to the point where his ball last crosses a water-hazard margin and that judgment subsequently proves incorrect (Decision 26-1/17).'