Woods possibly on his way to 100 PGA Tour wins 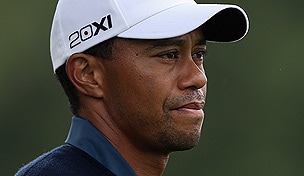 For his 50th PGA Tour victory, the folks at the Buick Open gave Tiger Woods a cake. It was huge, big enough for a family of about the same number.

Tiger took a swipe of the frosting and sampled it. His grin was a mile wide.

“It took me 10 years to get here; hopefully I can continue playing well over the next 10, 20 years,” Woods said back in August of 2006, smack dab between winning the Open Championship at Hoylake and PGA Championship at Medinah.

On Monday, an older, more fragile Woods won his 75th PGA Tour event at the Farmers Insurance Open, throttling the field in a style both familiar and brand new.

Tiger holed bunker shots and chip shots and he buried putts that bounced along poa annua. He threw darts with his wedges. He ran away from the field, pushing his lead to eight before settling for a four-shot win.

Even when Tiger hit wild shots off the tee (he historically is iffy with the big dog) he got by with his skill and imagination (best combination the game has ever seen).

The win along the rugged Pacific coastline pulled Tiger within seven of tying Sam Snead for the all-time record for wins on the PGA Tour.

There was no cake, but no matter. The victory – so old-school Tiger – brought up something even sweeter: the specter of a race to 100 victories.

I hadn’t even considered the number attainable until Tiger slammed the door at Torrey Pines, where he has won eight times as a professional (including the 2008 U.S. Open) and stands to win a few more.

Tiger has more happy places in golf than anyone. Bay Hill (seven victories). Akron (seven). Memorial (five). Augusta National (four). Like Torrey Pines, none of those tournaments is going out of business any time soon.

The odds for Tiger reaching 100 are favorable.

Even as his winning rate has slowed – it took him 10 years to reach 50 victories and another 6 ½ to get 25 more – there are many reasons to believe he can get to that magic number.

The farther away from the dark days of 2009-2010 he gets, the more comfortable he looks. His swing changes have come together and his short game is sharp. He’s also as healthy as he’s looked in years.

Then there are the less tangible forces, the outside motivation that always fuels him. The ascendance of Rory McIlroy has Tiger’s attention, not to mention his nearly lifelong quest to upend Jack’s major record of 18.

Don’t underestimate fatherhood, either. Tiger has video of his son Charlie’s swing on his phone and has been showing off the little guy’s move to his Tour pals.

You don’t think Tiger wants his kids to see the old man as No. 1 in the world?

Beyond being a mythical number, 100 could be a game-changer in the argument for who is the greatest of all time, even if Tiger fails to catch Jack.

Tiger has already passed Jack for PGA Tour titles, 75 to 73. Score a point for Tiger. But Jack had 19 second-place finishes in majors (Tiger has six). Point for Jack.

Jack had better competition, more Hall of Famers to take down. Tiger had the cut streak. Jack has a better Ryder Cup record.

And back and forth it goes.

Tiger vs. Jack is the game’s water-cooler debate that just won’t go away (and what will happen if those two face off in the golfchannel.com Ultimate Match Play competition? Could happen.)

But Tiger with 100 victories would add a huge wrinkle to an argument with so many textures.

One hundred wins, as Tiger might say, would be pretty good.