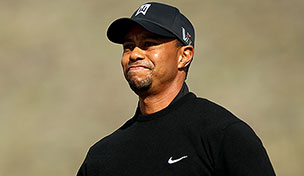 MARANA, Ariz. – For just the third time in 13 appearances at the WGC-Accenture Match Play Championship, Tiger Woods has lost in the opening round – this time a 2-and-1 bout against Charles Howell III.

Woods and Howell were never separated by more than one hole until Howell rolled in a 23 footer for birdie at the 16th in fading light. On the next tee officials asked both players if they wanted to stop for the day and complete the match on Friday?

“I said I don’t care and Tiger said let’s go so off we went,” Howell said.

For the day Woods was 2 under par, including a two-putt birdie to square the match at the par-5 13th hole. Howell won the short 15th with a tap in par and advances to the second round for the third time in his career.