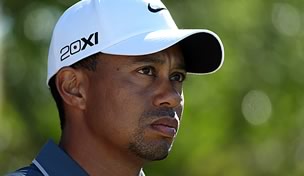 Getty Images
HILTON HEAD ISLAND, SC - APRIL 24: Brandt Snedeker lines up a putt on the 18th hole during the final round of The Heritage at Harbour Town Golf Links on April 24, 2011 in Hilton Head Island, South Carolina. (Photo by Streeter Lecka/Getty Images)  -

ABU DHABI, United Arab Emirates – Tiger Woods missed the cut in his first regular European Tour event following a second-round 75 at the Abu Dhabi HSBC Golf Championship that included an incorrect drop on the fifth hole that resulted in a two-stroke penalty.

Woods’ tee shot at the par-4 fifth hole sailed right of the fairway and into vegetation growing in the desert. Initially he asked playing partner Martin Kaymer to confirm it was a plugged lie and the German quickly did, which Woods believed allowed him relief without penalty.

Video: View the Woods incident at No. 5

Woods was walking off the 11th green when a European Tour rules official informed him that they were looking into the drop. When he arrived in the scoring area after he’d finished what he believed was a 1-over 73 round to make the cut by one stroke officials informed him the drop had been illegal and he would be assessed a two-stroke penalty for violating Rule 25-2.

“All tours extend embedded ball relief, under the rules of the game (and) use the note to that rule which extends it through the green, which means everywhere on the golf course except hazards,”, said Andy McFee, the European Tour’s chief referee.

“But it’s very specific and it refers to ground other than sand. Now, unfortunately, this area, while it’s got vegetation on the top of it, it’s just creeping vegetation and sand.”

Woods was asked by McFee after the round if he wanted to drive out to the area to take a closer look but he declined.

“That’s why I called Martin over to make sure that it was embedded,” said Woods. “Evidently I broke a rule. Consequently, I get two shots.”

Kaymer, who took less than 10 seconds to assess Woods’ lie adjacent the fifth fairway, said he was surprised by the ruling.

“Tiger called me over and said, ‘Is it embedded?’” Kaymer said. “I said, ‘I think so.’ He just wanted to check and it was embedded and then I walked away.'