Woods in position for eighth win at Torrey Pines 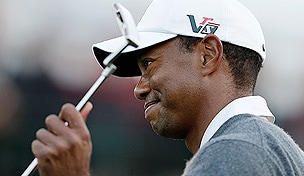 SAN DIEGO – His shadow hasn’t fallen this darkly over a tournament since before that crash into a neighbor’s yard shook loose the best pieces of his game.

Tiger Woods heads into Monday’s conclusion of the Farmers Insurance Open towering like the giant talent of old.

He’s piecing together a vintage performance at Torrey Pines, one that seems destined to rank among his most complete, pre or post scandal.

At 17-under through seven holes of the final round, Woods has built a six-shot lead on Brandt Snedeker (through 13 holes) and Nick Watney (through eight holes).

This isn’t over, Woods cautions. He’s only 61 holes through the 72-hole event, and yet it sure feels like it’s over. It feels like the tournament staff can start carving Woods’ name on another trophy. The sense of inevitability that marked Woods’ prowess as a frontrunner is beginning to come back here.

Woods has led, or shared the lead, 53 times going into the final round of a PGA Tour event. He’s closed the door on a win 49 times.

The confidence in Woods’ step, in his body language, suggests Monday’s a foregone conclusion, though Woods isn’t conceding anything.

“I’ve got to continue executing my game plan,” Woods said. “That’s the idea. I’ve got 11 holes to play, and I’ve got to go out there and play them well.”

About the only thing that did not look quite right Sunday was Woods without his red shirt. He says he’s breaking it out Monday. That just might complete the picture of old.

When Woods is at his best, he crushes more than golf balls. He crushes his opponents’ spirits. We’re seeing the possibility of that kind of domination again this week. We’re seeing it like we haven’t seen it since Woods’ life was turned upside down back at the end of ‘09.

We saw it most poignantly at the fourth hole in the final round, where Woods gave his challengers hope, only to dash them with a great escape, a classic recovery.

Woods blew his drive way right at No. 4, a nasty little hole for him this week. He double bogeyed it in the first round.

Four shots ahead there late Sunday afternoon, Woods couldn’t have liked his predicament when he reached his ball. He appeared stymied behind a tree.

Woods crossed his arms and studied the mess the way a plumber studies a clogged toilet.

This, though, is where Woods might have sealed the field’s fate.

With a swing that made him look like a matador whirling a cape away from an angry bull, Woods carved a hard cut around the tree, running his great escape from 160 yards up near the front of the green. From there, all he did was chip in, holing out from 40 feet. He made birdie from that mess, actually gaining a shot on his closest pursuers instead of losing one.

“It came out cutting,” Woods said. “I was surprised I was able to get that much club on the golf ball with that much grain coming into me,” Woods said.

Woods has looked dominant with his driver, but he started the final round spraying it. He missed the fairway way left at the first, way left again at the second and way right at the fourth, and yet he was 2-under on the final round going to the fifth tee and actually building on his lead.

“I had the lead, and the whole idea was to build on my lead,” Woods said. “I’ve done that so far. I’ve got to do it again tomorrow.”

With a runaway Monday, Woods builds on the idea he can still dominate this game.