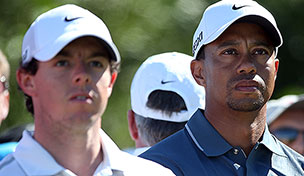 Getty Images
MEMPHIS, TN - JUNE 12: Rory Mcllroy of Northern Irelan chips onto the 11th green during the third round of the St. Jude Classic at TPC Southwind held on June 12, 2010 in Memphis, Tennessee. (Photo by John Sommers II/Getty Images)  -

PALM BEACH GARDENS, Fla. – After getting bounced from the WGC-Accenture Match Play Championship in the first round, the world’s No. 1 and No. 2 players decided to have their own private match.

“We thought we would play our own match play final, except it was over 36 holes,” McIlroy said Tuesday at The Honda Classic, where he is defending champion. “We had two matches. He beat me the first time, and I beat him in the second, so we're even.”

McIlroy won The Honda Classic last year holding off a hard-charging Tiger Woods in the final round. Nine behind McIlroy at day's start, Woods closed with a 62 to get within a shot of McIlroy at one point. Woods ended up tied for second, two shots back.

McIlroy and Woods are both South Florida residents now. McIlroy plays most of his golf out of the Bear’s Club in Jupiter, Woods out of Medalist. Former NFL receiver Ahmad Rashad joined them in Sunday's rounds.

“It’s the first I’ve actually been up at Medalist,” McIlroy said.

They played 36 holes in less than five hours.

“I made a seven or eight in the first match,” McIlroy said. “I made a few birdies on him in the second match.”