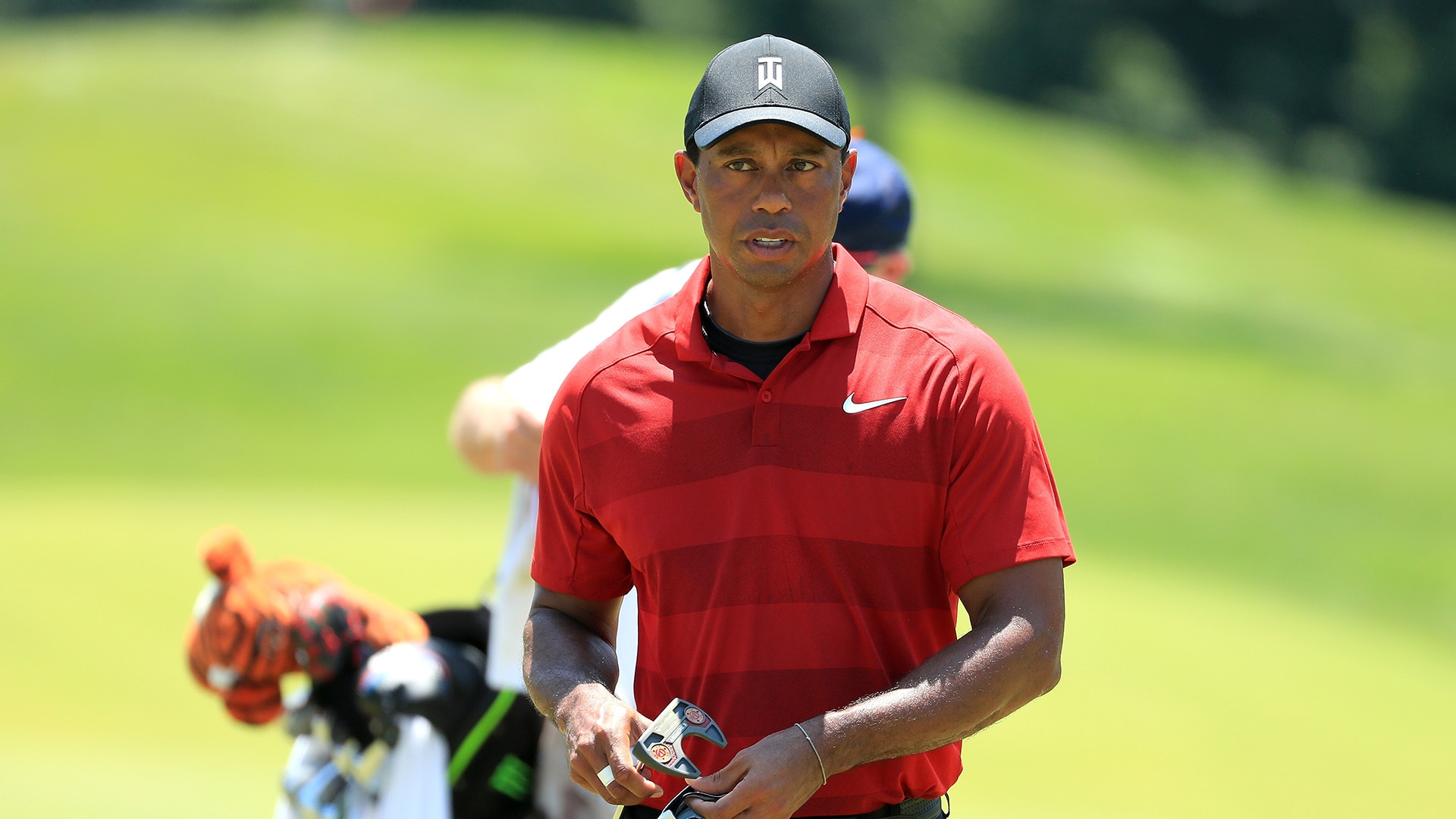 POTOMAC, Md. – There was just enough sweat dripping from the brim of his hat to blur the iconic “TW” logo.

There was a metaphor there somewhere, a once unparalleled athlete conjuring the ghosts of greatness and his competitive identity moving slowly back into focus.

On the roadmap back to relevance, the Quicken Loans National was a delightful detour for Tiger Woods, filled with equal parts promise and purpose.

Although he won’t win a silver putter award for his performance on TPC Potomac’s greens, his dramatic switch to a mallet-headed putter was a qualified success and his ball-striking, which hasn’t been an issue for months, remains something close to vintage.

“I've hit the ball well in this stretch, I just haven't made anything,” said Woods, who closed with a 66 to finish 10 strokes behind his Italian nemesis Francesco Molinari. “I'm starting to hit some putts, I'm starting to make those putts you're supposed to make from 10, 15 feet, but I'm also making some from outside 20.”

Woods had never played TPC Potomac during a tournament, and will likely never play it again, but one of the PGA Tour’s sneaky-hard tests was probably just what he needed heading into the year’s final two majors.

For the week, he ranked 13th in strokes gained: tee-to-green and seventh in greens in regulation. There were moments throughout a sweltering week when it was as if the highlight reel had been turned back to the mid-2000s and not a hole location was safe.

As for the putting, well, there was movement on this front, albeit it’s probably best to consider his equipment experiment a work in progress.

He finished seventh in the field in strokes gained: putting, gaining 4.78 shots on the field. That’s his second-highest performance of the year, behind only the Arnold Palmer Invitational and far better than his pedestrian showings in recent weeks.

“It feels good, I mean, it really does,” said Woods, who benched his trusty Scotty Cameron Newport 2 for a TaylorMade TP Collection Ardmore 3 model this week. “Even my bad putts still had the ‘go in’ look. That's something that I haven't had. When I was struggling there for a little bit I couldn't even cheer for my good ones.”

For all the bright spots, however, there remains a missing element. That ability he once had to will himself to victory has been replaced by a game that fails to produce on command.

On Sunday he began the final turn a half dozen shots out of the lead. Although that wasn’t exactly position A for a player who is still easing his way back into the competitive fray, it was an opportunity and when he rolled in back-to-back birdies at Nos. 7 and 8 to move to within four strokes of front-runner Molinari, who once beat Woods in a curious and meaningless singles match at the 2012 Ryder Cup, there was a sense something special could happen.

“I just saw that I was only four back at the time when I made the turn and so I thought that maybe if I got on the back nine, I shot 30, maybe 29, that would be enough,” Woods said. “Evidently, I would have to shoot 24 on the back nine.”

He was just as close to a closing nine of 44, with a missed 6-footer for birdie at the par-5 10th hole all but ending his title chances, and he added to his missteps by playing Nos. 13 and 14, the fifth-easiest and easiest holes on Day 4, in 1 over par.

For all his progress, his week in rural Washington, D.C., wasn’t all rainbows and unicorns. Like he did at the Valspar Championship and Arnold Palmer Invitational he failed to produce the type of play needed late on a Sunday to hoist a trophy.

“The last two days playing 13, 14 the way I did, you know, I bogeyed 13 twice and then didn't birdie 14 either day and I was right there next to the green,” Woods said. “Those are things that I can't afford to do and expect to win a golf tournament.”

There was also a nostalgic element for Tiger. This was likely the last National that will be played with Quicken Loans moving its sponsorship dollars to a new Tour event in Detroit starting next season and few potential replacement sponsors and even fewer available spots on the new schedule. It was not the ending he envisioned for a tournament he’d molded into something with so much potential.

His quest to qualify for what will be the last WGC-Bridgestone Invitational played at Firestone also took a hit, with his tie for fourth place moving him just inside the top 70 in World Golf Ranking. He will have next month’s Open Championship to crack the top 50 and qualify for the season’s last World Golf Championship, but it’s starting to feel like a Hail Mary.

Eleven stops into this comeback Woods continues to make progress and answer questions he hadn’t even thought about at this point last year, but the ultimate milestone - winning - remains a picture that is still out of focus.