'Tired' Woods has work cut out for him Sunday 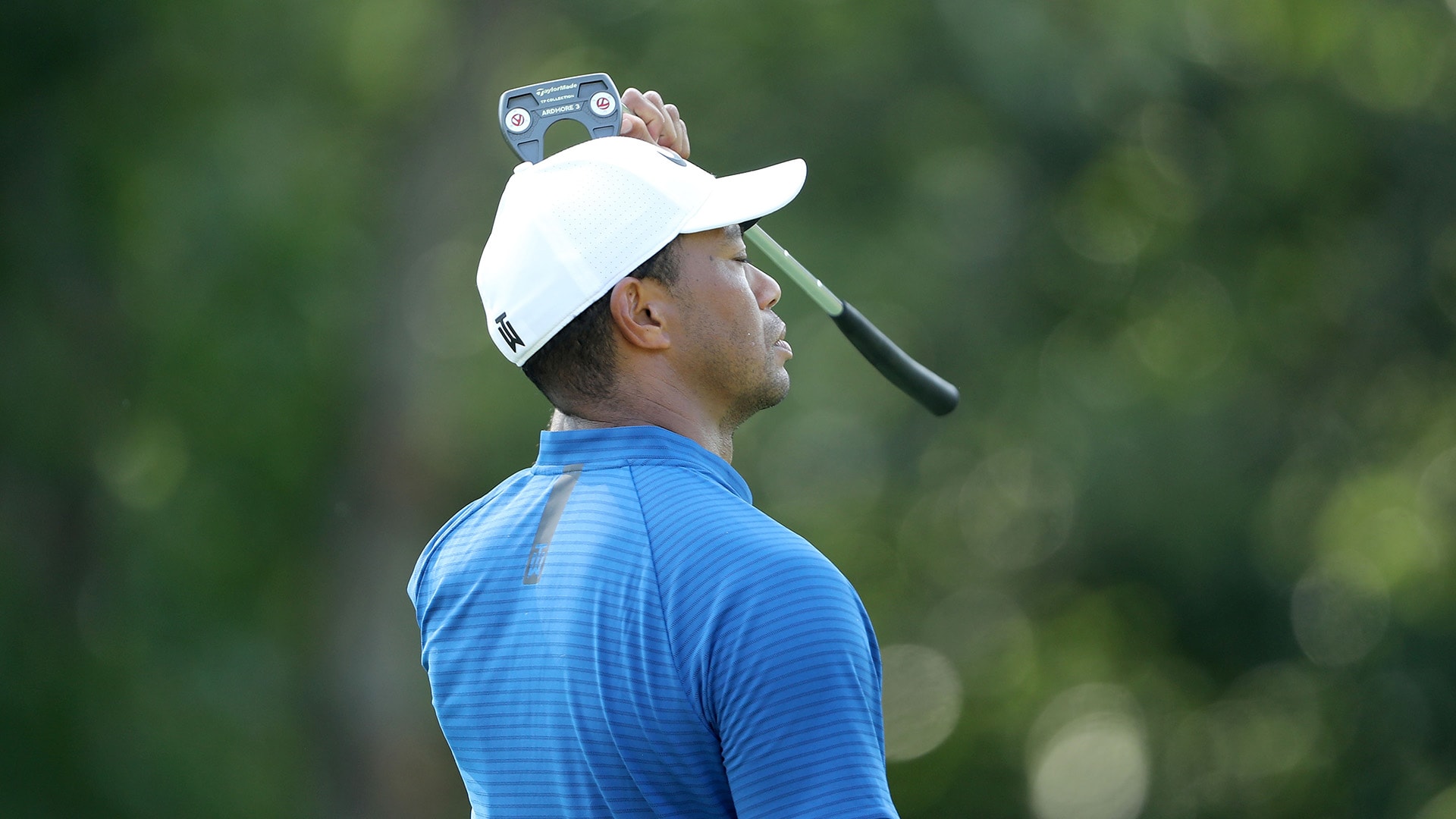 ST. LOUIS – After the third and final stop of his post-round media blitz, at the end of a 13-hour workday in 90-degree heat, Tiger Woods trudged up the steps of the Bellerive clubhouse and into the air-conditioned comfort of the locker room. He took a seat in the far corner, tipped back the lid of his Nike hat and sipped from a white Styrofoam cup. How he felt was apparent, but he verbalized it anyway.

Woods was in the early-late wave to start this 100th PGA Championship, and so he needed to return to the course at 7 a.m. local time Saturday to complete his second round, which was previously suspended because of inclement weather. When play resumed, Woods had 28 1/2 holes to complete. He played them in 5 under par, vaulting up the leaderboard and giving himself another realistic chance at snapping that decade-long major drought.

After a third-round 66, there are only five players between Woods and the lead, but two of them are major champions (Brooks Koepka and Adam Scott) and two others surely will be soon (Rickie Fowler and Jon Rahm).

“I’ve got my work cut out for me tomorrow,” said Woods, who is at 8-under 202. “This golf course is putting it on us – you have to be aggressive. You’ve got to make birdies.”

Which is why Woods was frustrated by his finish Saturday, by his 10 consecutive pars to close on a cupcake-soft course. Time and time again, he couldn’t get the ball to the hole on the “fuzzy” greens, and the one time he did, with his eagle putt on 17, he bashed it 4 feet by and yanked the comebacker.

That Woods stalled on the back nine wasn’t completely surprising, at least not this year. It’s been one of the lone disappointments of this remarkable comeback.

For months, Woods has been as good as anyone through 63 holes. But he also knows that careers are defined by what comes next, and there’s a whole other mountain to climb to get from 63 to 72.

For the game’s preeminent closer, his inability to finish out rounds has been mystifying.

There was the late slip-up at Honda, where he played the last four holes in 3 over.

There was the curious end at the Valspar, where, needing a birdie to force a playoff, he laid well back off the tee and left himself a 40-footer that never had a chance.

There was the out-of-bounds tee shot on 16 at Bay Hill. The 3-over stretch late at The Players. The bogey and double bogey on the back nine at Carnoustie once he grabbed the outright lead on Sunday.

Add it all up, and his final-round scoring average (70.45) is nearly two strokes higher than his scores in the third round (68.64).

Maybe he succumbs to the pressure.

Woods himself didn’t have an answer earlier this week.

“I wish I could figure that out,” he said. “I don’t know what it is. I don’t know why I haven’t played the back nine as well as I have in the past. Who knows? If I had the answer to it, I would give it to you, but I really don’t know.”

Needing to take it deep on another ideal day for scoring, Woods went out in 31 to sit just two shots off the lead. Bellerive shook, the thunderous roars echoing all the way back to the clubhouse.

“It kind of reminded me of being in the vortex a lot years ago,” said Stewart Cink, who was grouped with Woods on Saturday. “It didn’t really feel like there was a difference at all. It felt like all that I remembered playing with Tiger all those years ago, when he was winning tournaments. Today was really no different.”

What’s different, perhaps, was that instead of going on to post a super-low round to surge into or near the lead, Woods stood pat. He missed five consecutive birdie tries inside 20 feet on the back nine, growing increasingly annoyed with each squandered opportunity.

In need of a spark, Woods roped a 243-yard long iron into the par-5 17th, walking after his ball as it rocketed through the still, humid air. It climbed the ridge in the middle of the green and finished 20 feet away.

The eagle would have put him in solo second, but he was so determined to get the ball to the hole that he instead powered it through the break. He left himself 4 feet coming back, and missed that, too.

“I know he’s a little frustrated on the back nine with not making some of those putts,” Cink said, “but it’s not the easiest course this week to hole putts.”

This week, Woods leads the field in front-nine scoring average (10 under). And he’s tied for 69th on the back nine (2 over).

It’s impossible to know whether his Saturday stall was because of the fuzzy greens, or the major pressure, or the fatigue of a long day in the heat.

Not surprisingly, Woods pointed to the latter.

“It’s not necessarily the physical,” he said. “It’s mentally grinding that hard for 29 holes in this heat. It was a long day.”

To get his body ready for Sunday, Woods is likely slated for more ice baths and deep-tissue massages.

If they can work out the kinks of his back-nine struggles, the final round of the PGA could be one for the ages.