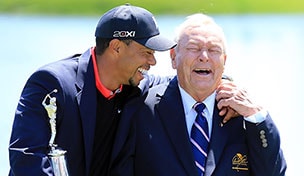 That’s been the case this year on the PGA Tour now that Woods has won his third title. But it’s particularly the case at the Arnold Palmer Invitational where Woods collected his eighth title Monday with a final-round 70, good for a two-shot win over Justin Rose.

This latest version wasn’t as dramatic as some of the walk-offs in the past but it certainly was as significant. Woods moved back to No. 1 in the Official World Golf Ranking for the first time since October 2010. The lowest Woods sank during the stretch was No. 58.

“There are certain events that are more special when you have Arnold Palmer on the 18th green or you have Jack (Nicklaus) at the Memorial,” Woods said. “It's special to be able to walk off the 18th green and see these guys there. They're living legends of the game.  What they've meant to the game of golf and for us to come back here and play over the years and having it here.”

Woods’ lead was up to five shots at one point but Rickie Fowler and Rose applied some pressure on the backstretch. Fowler moved within two but his undoing came at the par-5 16th hole where he plunked two shots into the water and walked away with a triple bogey. He shot 84 while paired with Woods in the final round of the Memorial last year. This year he managed 73.

“This year he looks a lot more comfortable out there,” Fowler said of Woods. “He doesn't really miss many shots. And if he does, it's not by a whole lot.”

Rose, believe it or not, came from well off the radar. A clunky close to his third round and a sluggish start to his final round made it seem like Rose would be a non-factor. But he made four birdies late – coupled with Fowler’s water trouble – and finished in solo second place.

“He plays every shot like he plays them on Sunday,” Rose said of Woods. “His intensity is the same on Thursday often as it is on Sunday, and that makes Sunday a lot less different for him. He plays in that kind of atmosphere far more regularly than a lot of guys do, and it's an adjustment for most of us.  It's a known for him.”

“I’ve cleaned up a lot of different things in my game and I’m very pleased with where it’s coming along,” Woods said about his game compared with the past couple years at Augusta National. “I’m really excited about the rest of the year.”

His opponents may not be so thrilled.