Woods/Thomas-Leishman/Niemann: Breaking down the Day 1 matchups 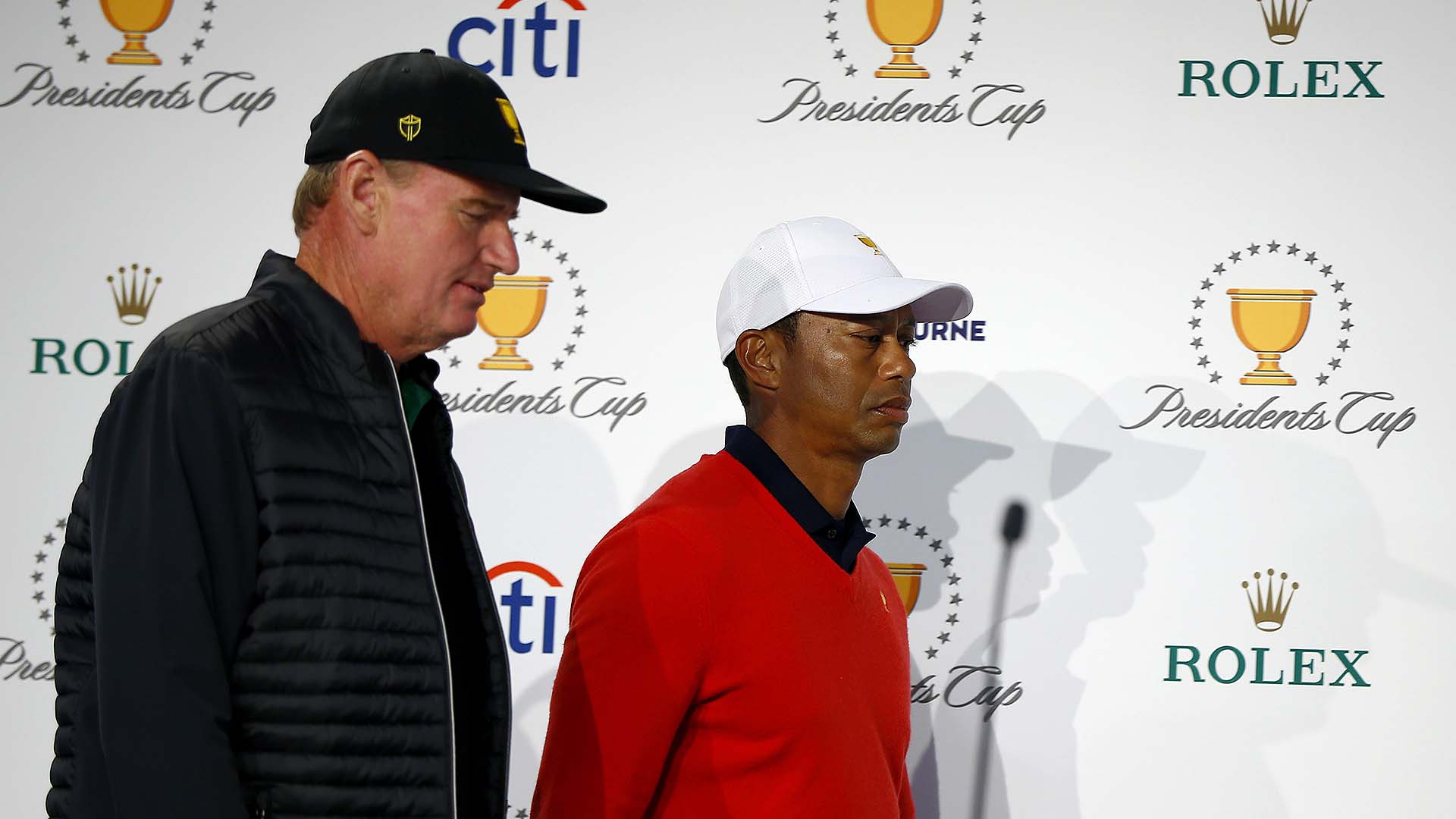 MELBOURNE, Australia – The Presidents Cup pairings format continues to be intriguing. One captain throws out his pairing, the other then ponders and delivers a counterpunch.

Wednesday at Royal Melbourne was no different, as U.S. captain Tiger Woods deferred the opening pick to International captain Ernie Els, who opted for Aussie Marc Leishman and rookie Joaquin Niemann. Woods followed with himself and Justin Thomas.

Rickie Fowler and Matt Kuchar are sitting the fourball session for the Americans. Cameron Smith and Haotong Li are sitting for the Internationals.

Here is the breakdown of how Rex Hoggard and Jay Coffin see the day unfolding:

HOGGARD: Sending himself out first is the ultimate playing-captain move and Woods and Thomas are the U.S. side’s second-best fourball tandem, but Leishman is well placed first off to get the Australian crowds going early and International captain Ernie Els has high expectations for Niemann. Halve.

COFFIN: There is no way on earth that Woods is going out first and losing. It’s just not going to happen. Now, his Presidents Cup fourball record is only 7-9. But he has himself a horse in Thomas and the two together are going to produce way too many birdies for the International team to handle. Easy win for the Americans.

HOGGARD: Although Woods might be the hottest player on the U.S. team, Schauffele is close behind having finished in the top 10 in four of his last five starts and Cantlay has proven himself unflappable this season. The depth of the U.S. team takes over early. Easy “W” for the red, white and blue.

COFFIN: This group combined has played in exactly one Presidents Cup (Hadwin). There will be nerves and this could go either way. There are a lot of birdies to be had if they calm down and find a rhythm. The Internationals will almost have to win this match to avoid going down 0-2 immediately. Hadwin and Im will surprise and win.

HOGGARD: The bigger, stronger DeChambeau has been impressive this week and Finau was one of the few highlights for the U.S. at last year’s Ryder Cup, but Scott has something to prove and he carries the Internationals to a crucial victory. Expect this match to go the distance but the Internationals earn the point.

COFFIN: Scott and An will impress and become a formidable duo. Finau was one of only three Americans who played well last year at the Ryder Cup and will likely again. Not sure how DeChambeau will play. In a quick turn of events, the Internationals will win and take a 2-1 lead in the session.

HOGGARD: The crowd is sure to make things interesting for Reed but it only spurs him on. Matsuyama’s record in the Presidents Cup is horrible (4-6-3) and it won’t get any better on Day 1 with the U.S. cruising to victory.

COFFIN: Reed will get the business all day and it will turn him into a birdie-making maniac. He will make six birdies on his own ball. Matsuyama and Pan are going to play well but it’s not going to be nearly enough. The Americans win this one fairly easily.

HOGGARD: Els likely considers Oosthuizen and Ancer, who has been billed by Scott as the team’s top prospect, his side’s best fourball tandem but they never really have a chance here. Johnson and Woodland are a dream pairing who can overpower any course and any opponent. Another U.S. walkover to give the visiting team a 3 ½ to 1 ½ lead after Day 1.

COFFIN: More heavy artillery for the Americans. Sure, DJ may be rusty, but from all accounts he’s quickly found form and is ready to pounce. Woodland has been waiting for months to be a part of this team. Oosthuizen is the only player on the International team with a winning record in the Presidents Cup. He will play like it and this match will be close, but the Americans will prevail. Final score at the end of the session will be U.S. 3, International 2.