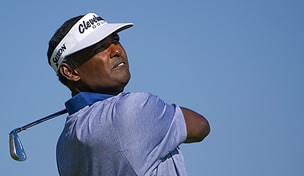 MARANA, Ariz. – Nearly a month after Vijay Singh admitted to using a deer-antler spray that reportedly included IGF-1, a growth factor like human growth hormone that is banned under the PGA Tour’s anti-doping policy, there is still nothing to report on the investigation although commissioner Tim Finchem said on Sunday he expected a resolution “relatively soon.”

“We're in our process,” Finchem said at the WGC-Accenture Match Play Championship. “There's no time urgency here, because if action is taken it'll be reported.”

Under the Tour’s anti-doping policy a violation will be announced but only if it involves a performance-enhancing drug like IGF-1, not a recreational substance.

If IGF-1 was in the Ultimate Spray, which Singh purchased from an Alabama-based company, he could be suspended for up to one year and fined up to $500,000.

Although the only way to detect IGF-1 is via a blood test, which the Tour doesn’t allow, an admission is tantamount to a positive test under the policy.

Singh finished tied for 51st at last week’s Northern Trust Open, but did not qualify for this week’s Match Play and is not in the field at next week’s Honda Classic or the WGC-Cadillac Championship the first week of March.