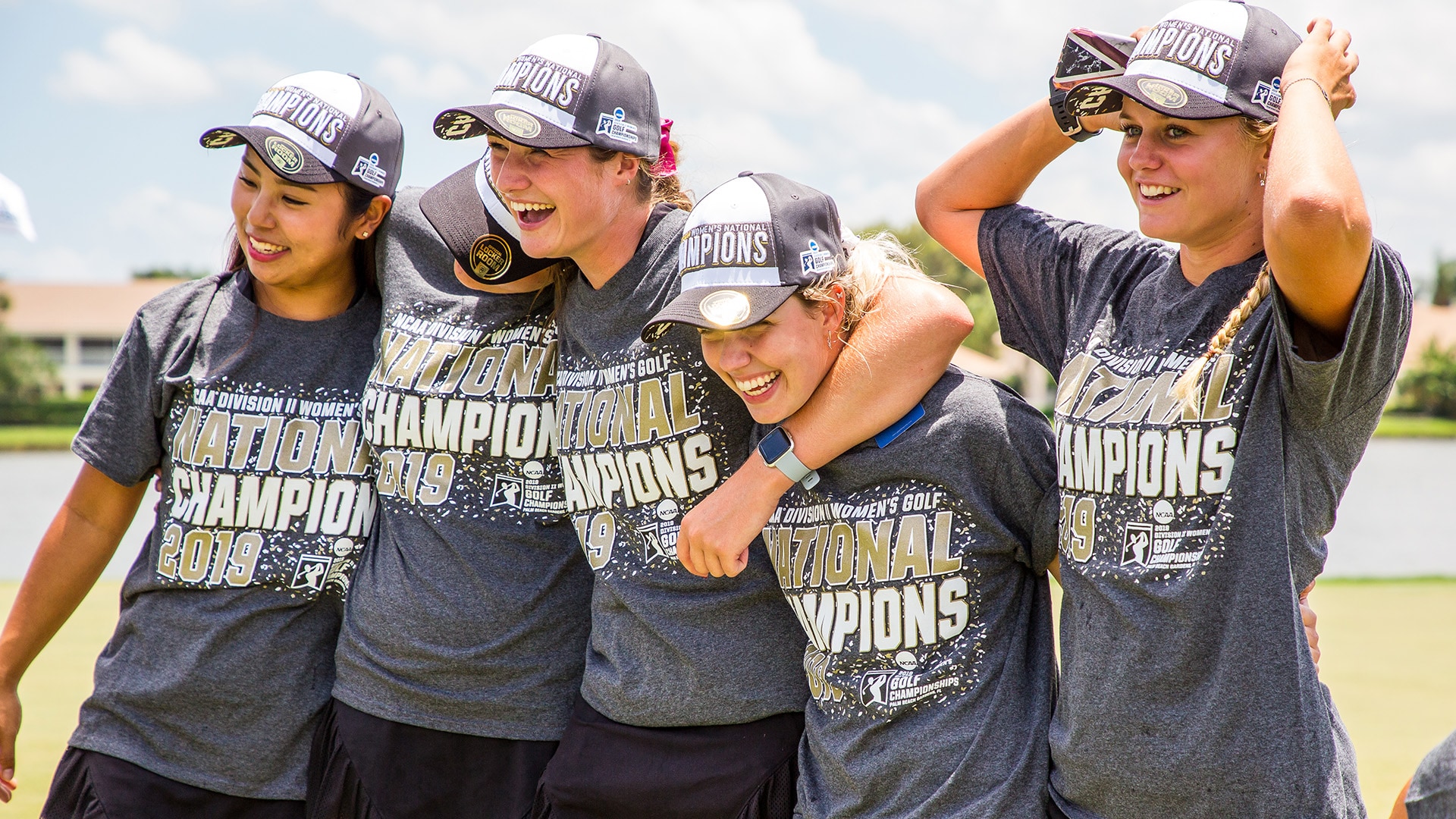 The Florida Tech women’s golf coach sat in athletic director Bill Jurgens’ office around 9 a.m., holding back tears as Jurgens informed Saltmarsh that the program, along with the men’s and women’s tennis teams, was being cut at the end of the season. About three hours later, Saltmarsh sat with his head down as Jurgens broke the heartbreaking news to Saltmarsh’s players.

“I knew it was coming and I couldn’t look,” Saltmarsh said. “There was no ease into it, it was just, boom, this is what’s happening.”

When Saltmarsh finally mustered the strength to look up, he was devastated by the shock on the girls’ faces. Every jaw in the room was dropped. But later that afternoon, in a separate team meeting, the sorrow and anger turned into motivation. The team’s final goal was clearer than ever.

On Saturday at PGA National in Palm Beach Gardens, Fla., Florida Tech accomplished that goal. In a conclusion fit for a Hollywood script, the Panthers went out with a bang, defeating Cal State-San Marcos in the final match to win the program’s first – and likely last – NCAA Division II title.

“There’s two ways it could’ve gone,” Saltmarsh said. “It could’ve been a season where they said, well, this is our last season, and not put their all into it. But they didn’t want to let down their teammates, especially the seniors, and the team was so passionate about the sport that they still wanted to accomplish things.”

The Panthers’ journey to the top easily could’ve taken a different course after the announcement. The team was coming off a trying fall in which it finished fifth of worse in all four events. There was a serious culture problem.

“The more I pushed, the less I got from them,” Saltmarsh said. “They didn’t realize how good they could be, and they weren’t working at it.”

Two of Florida Tech’s most skilled players, sophomore Noelle Beijer and senior Paola Ortiz, combined to play just three tournaments in the fall. Ortiz didn’t play in the final three events for personal reasons. Beijer was benched following the season opener for lack of effort, as Saltmarsh sent a freshman whose scoring average was nearly 20 shots higher to the next event.

“It wasn’t about winning. It was about getting them to understand that if they work hard, they are going to be rewarded,” Saltmarsh said. “That set a precedent. They realized I wasn’t joking around.”

Finding out that their team was being disbanded pushed the players’ limits even more. To their credit, they responded perfectly. Saltmarsh didn’t change up the daily routine, and the Panthers went about their business as if nothing had changed.

Deep down, though, a fire had been lit.

Saltmarsh, who fought to secure individual spots and added a tournament in hopes of showcasing his players to other coaches, felt the momentum turn at the Battle of the Beach, the event that he added late, in February. Not only did Florida Tech win, its first victory of the season, but its Nos. 5 and 4 players, senior Lucy Eaton and junior Lauren Watson, finished first and second, respectively.

The Panthers won two of their next three events, including the Peggy Kirk Bell Memorial Invitational after rallying from 10 shots back in the final round to beat Lynn by 14 shots.

“That was the kickstart,” Saltmarsh said. “That’s when they realized that they could do something special.”

Florida Tech’s farewell tour eventually rolled into PGA National, where the Panthers won the 54-hole stroke-play portion and narrowly won their first two medal-match-play matches to book a spot in the final.

The magical run continued in the championship match. No moment summed up the fairy-tale final day like Eaton’s comeback victory in the leadoff match. Down six strokes with six holes to play, Eaton rallied to win by one. The Panthers took four of the five matches to win 4-1 and got out on top.

Florida Tech, which three months earlier was put on the chopping block, in part for a perceived lack of an ability to be competitive, defied those odds and was the last team standing.

That will remain the case, forever. 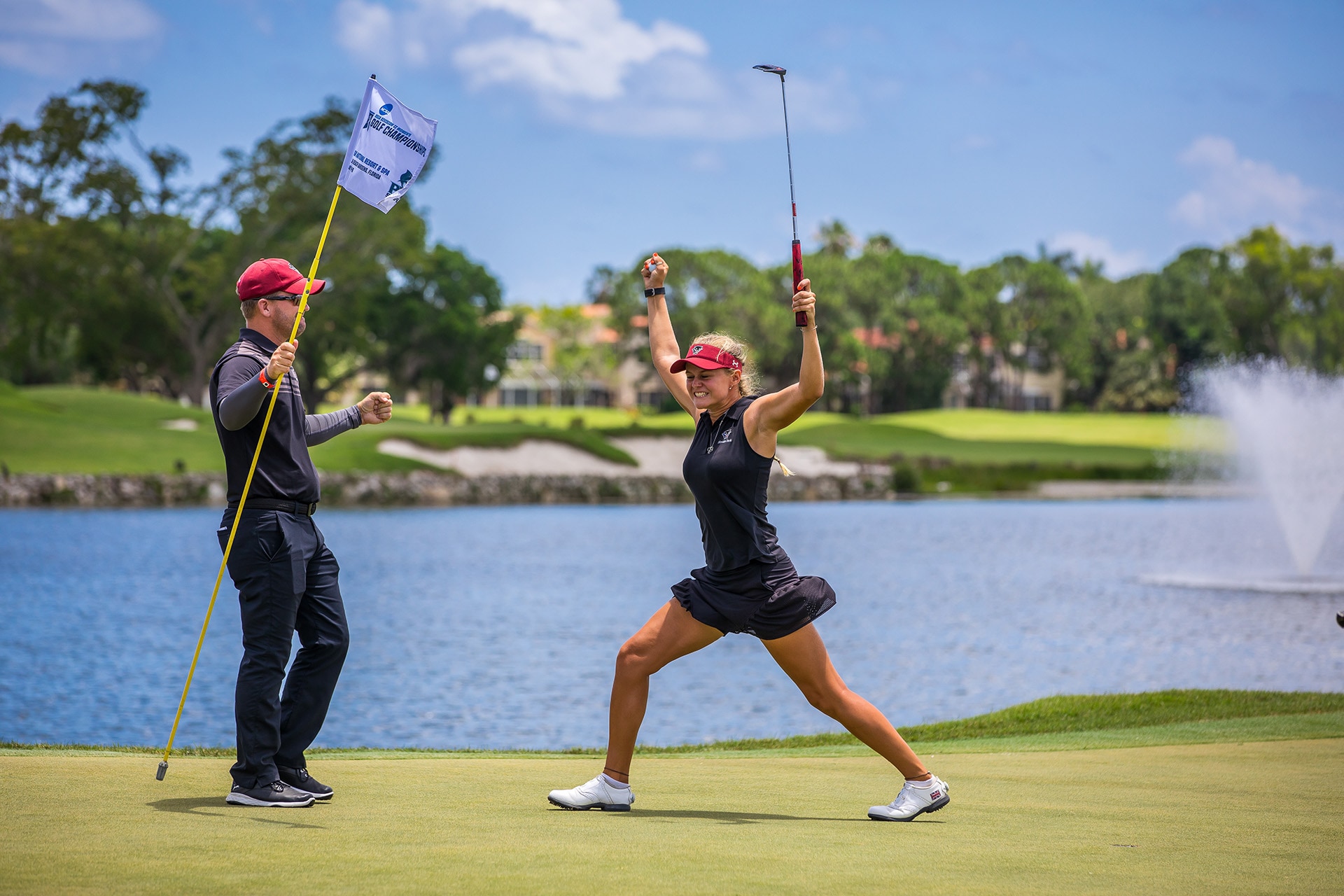 “It’s still setting in,” Saltmarsh said as he drove home from his office Monday evening. “It’s surreal. They’ve been able to achieve the highest possible accomplishment that they could achieve. … This will be a great lesson for future players, a great story for future teams. To be able to share with them, you have the same opportunity as they did, you just have to make the most of it.”

Back on campus in Melbourne on Monday, Saltmarsh and his players went to brunch. It was their final moment together as a team. From there, the players headed home for the summer, most of them for the final time.

Ortiz and Eaton have graduated. Watson plans to finish out her schooling at Florida Tech and compete for the men’s team next year. Beijer will transfer to Missouri, while sophomore Megan Dennis, who won her final match for the clinching point, is headed to Pepperdine.

There will be no decision reversal.

Each player took home a flag from PGA National, signed by every team member. Saltmarsh, who will remain the men’s coach at Florida Tech, bought a special blue souvenir flag and had it collectively signed, as well.

He also returned home with a large board featuring the NCAA bracket.

“That will be something that will be hanging around the office for quite some time,” Saltmarsh said.

Forever a reminder that while there may be no more women’s golf program at Florida Tech, this is a story that can never be taken away.