Trump awards Medal of Freedom to Tiger, 'a global symbol of American excellence' 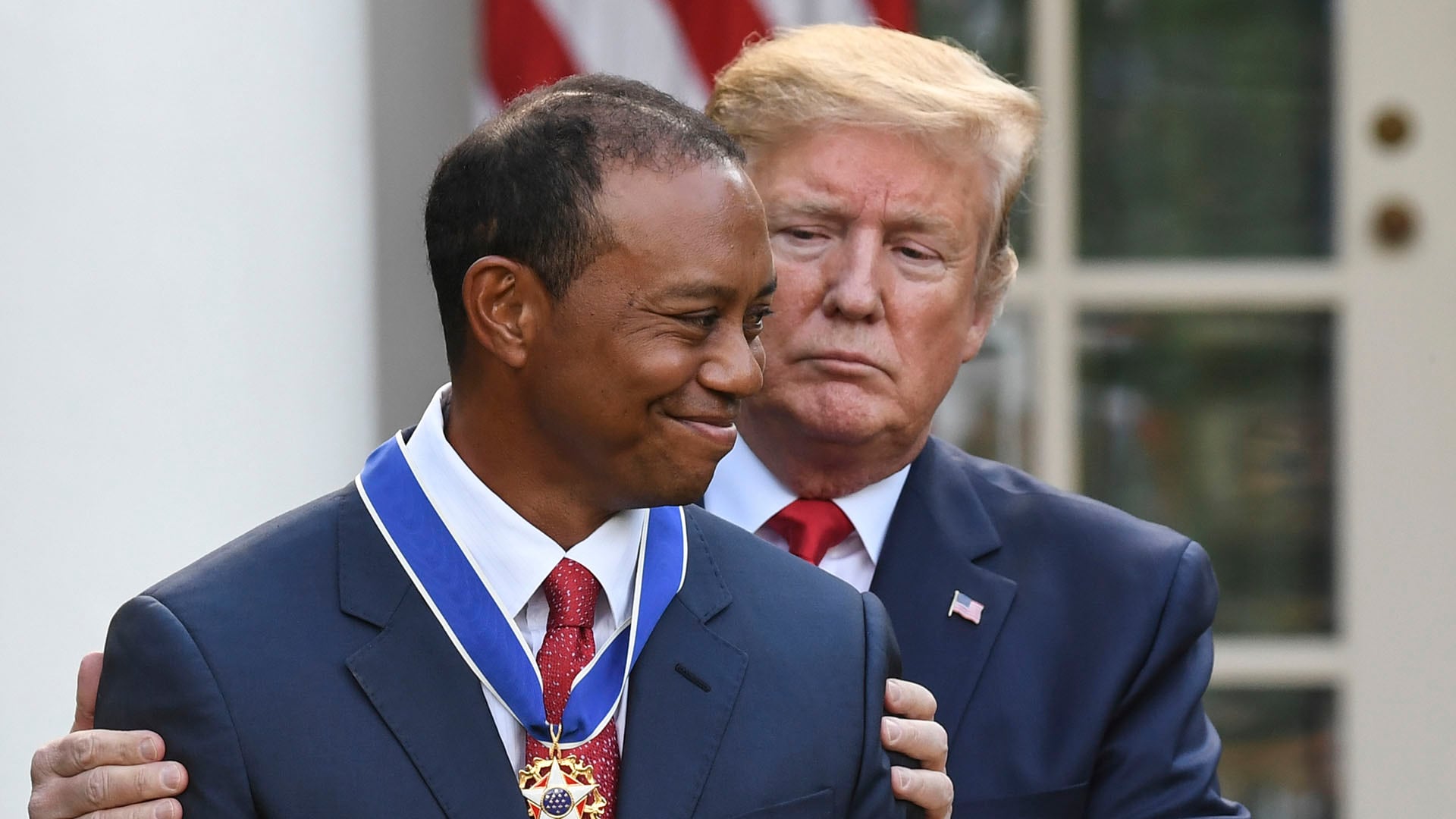 Getty Images
“Tiger fought through the terrible pain and he fought all the way back to the summit of golf… What happened [at Augusta] was one of most incredible comebacks that golf or any sport has ever seen.” - President Donald Trump said of Tiger Woods when he awarded him the Presidential Medal of Freedom  -

Nearly a month after winning his fifth Masters title and 15th major championship at Augusta National, Tiger Woods was standing next to President Donald Trump and accepting the Presidential Medal of Freedom on Monday in Washington, D.C.

Woods received the medal during a ceremony in the White House’s Rose Garden. Among those in attendance were Woods’ mom, Kultida; his kids, Charlie and Sam; girlfriend Erica Herman; and caddie Joe LaCava.

“This evening, we are in the presence of a true legend, an extraordinary athlete who has transformed golf and achieved new levels of dominance,” Trump said. “He’s also a great person; he’s a great guy. … Tiger Woods is a global symbol of American excellence, devotion and drive.”

Established by John F. Kennedy in 1963, the Presidential Medal of Freedom is one of the country’s highest civilian honors. It is bestowed at the sole discretion of the president to individuals who, according to the White House website, “have made exceptional contributions to the security or national interests of America, to world peace, or to cultural or other significant public or private endeavors.”

During his nearly-15-minute-long introduction, Trump talked about Woods’ golf career, from his amateur days to his thrilling major victories to his most recent comeback from four major back surgeries.

“Tiger fought through the terrible pain and he fought all the way back to the summit of golf,” Trump said. “… What happened [at Augusta] was one of most incredible comebacks that golf or any sport has ever seen.”

Trump closed by addressing Woods: “Tiger, we are inspired by everything you’ve become and attained. The job you’ve done is incredible – your spectacular achievements on the golf course, your triumph over physical adversity and your relentless will to win, win, win. These qualities embody the American spirit of pushing boundaries, defying limits and always striving for greatness; that’s what he does.”

Woods then stepped to the podium.

“This has been an unbelievable experience,” said Woods, who then fought back tears as he thanked his family and all those who have supported him throughout the years.

“I’ve battled. I’ve tried to hang in there,” Woods continued. “I’ve tried to come back and play the great game of golf again. I’ve been lucky of enough to have had the opportunity to do it again … The amazing Masters experience I had a few weeks ago was certainly the highlight of what I’ve accomplished so far in my life on the golf course.”

Woods is the fourth golfer to be awarded the Medal of Freedom, joining Arnold Palmer (2004), Jack Nicklaus (2005) and Charlie Sifford (2014), the latter of whom Woods called “the grandfather that I never had” and named his son after.

“To have been chosen as the next golfer after Charlie is truly remarkable,” Woods said.

The ceremony closed with Trump putting the medal around Woods’ neck. Woods and his family then exited with Trump back into the White House.

Trump and Woods have played golf together on multiple occasions, most recently on Feb. 2 when Jack Nicklaus joined them for a round at Trump National Golf Club in Jupiter, Fla. Woods is also designing the Trump World Golf Club Dubai course in the United Arab Emirates, which is scheduled to open later this year.

Tiger Woods has decided to skip next week's Travelers Championship as he did not commit before Friday's deadline.

Tiger Woods has released plans for his new short course that will open next spring in Pebble Beach.