Tseng loses her No. 1 ranking to Lewis 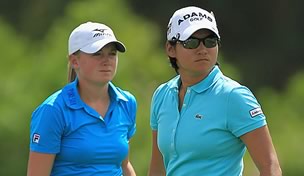 After 109 consecutive weeks atop the world, Tseng left the RR Donnelley LPGA Founders Cup knowing her reign was ending with Stacy Lewis finishing off a victory and taking over as the world’s new No. 1.

Tseng wasn’t crestfallen with the news. She was magnanimous and determined.

“I just want to play good golf,” Tseng said. “It doesn’t matter where I’m ranked. Even though I didn’t win, I really enjoyed this week. I’m grateful to all the fans who came out to watch us play.”