TT postscript: It's all coming together after 65 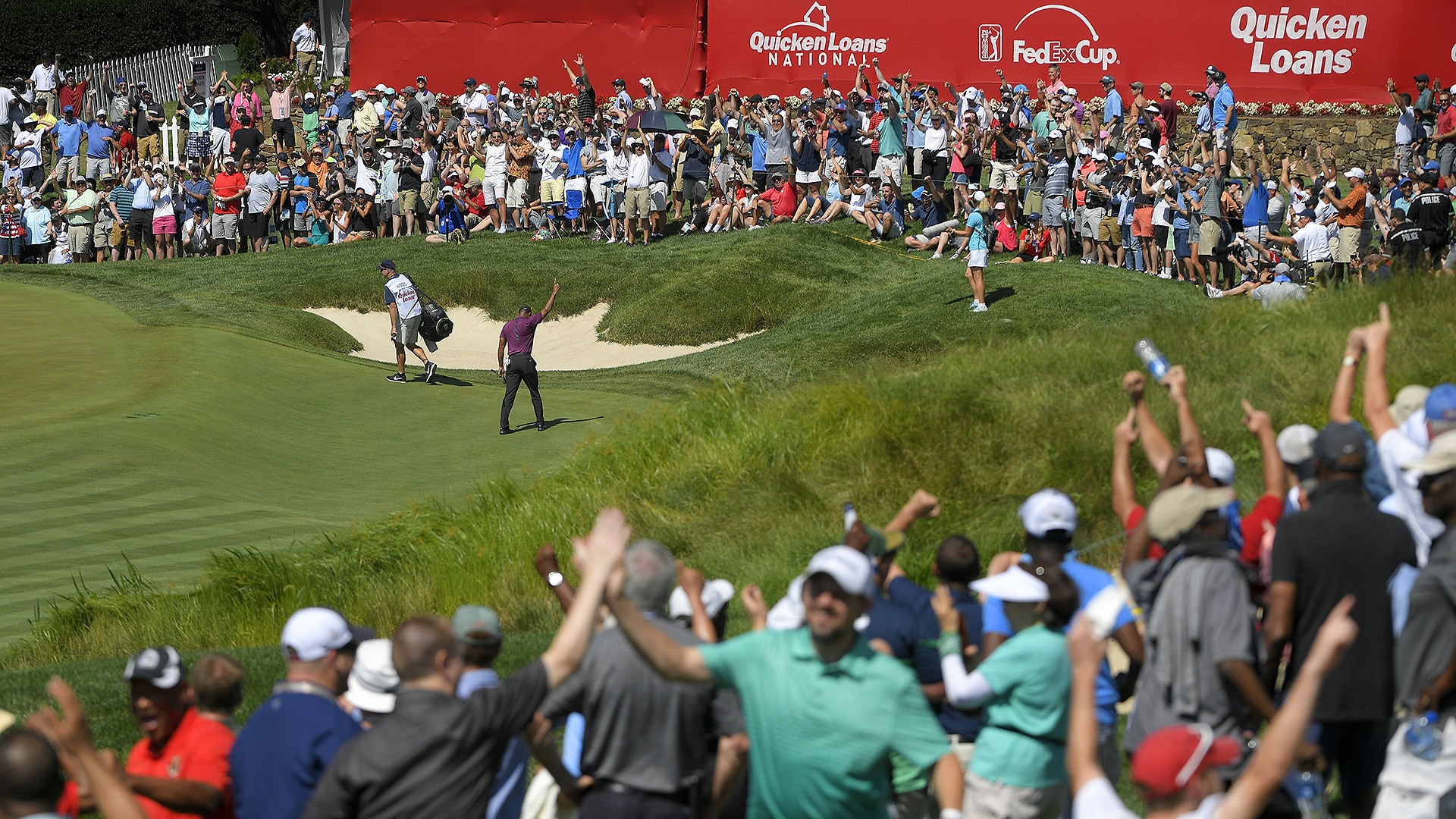 POTOMAC, Md. - I watched Tiger Woods make seven birdies Friday. He walked in at least two of them. He chipped in another. Here are some thoughts after I got unreasonably excited in unreasonable temperatures.

• Tiger's second-round 65 was a solid continuation of what Woods put together on the back nine Thursday - minus the short birdie misses. Those were replaced by several long makes. The TaylorMade Ardmore 3, which didn't seem to be any help a day ago, suddenly proved its worth. Overnight, Tiger went from losing more than a shot on the greens to picking up two on the field. He went from holing only 48 feet worth of putts to jarring 122. He drained a 24-footer on his opening hole - preceded by a decision to putt from off the fairway, which he acknowledged was a mistake - and followed that with birdies makes of 19, 15, and 25 feet at Nos. 12, 15 and 3. His only real mistake on the greens was a sloppy three-putt bogey at 17.

• His iron game is starting to get scary good again. Sure, there's still the occasional loose shot - the ball he hit into the weeds at No. 11, for example - but when he isn't knocking down flagsticks, he's flying the ball pin-high to the middle of the green. He also wedged to 2 feet at the par-4 fifth, setting up his final birdie, and for the second day in a row knocked it to inside 7 feet at the par-4 13th. Unfortunately, he's squandered both of those birdie opportunities.

• Perhaps lost in the shuffle is his short game. As of 2 p.m. ET, Tiger was second in the field in strokes gained: around the green. He’s 2-for-2 on sand saves and 8-for-10 scrambling. His best work of the week came at the par-4 18th and got him through his first nine 2 under:

• As for that hole-out, this guy still elicits roars like no one else. A Tiger hole-out is wholly unmistakable. There are some who suffer from Tiger fatigue, but it's always a circus outside the ropes as crowds hope for a single glimpse of greatness. When he actually delivers, when they get to see it in person, they go nuts.

• Here's one tiny detail to watch out for this weekend. Pay close attention to his club selection on the 299-yard, par-4 14th. Woods pulled driver this morning, felt the wind die down, switched to 3-wood, didn't make his best swing, and found the fairway bunker. Asked about it after his round, he conceded that driver is too much club and 3-wood isn't enough to clear the sand unless he absolutely stripes it. That's a hole he'll need to take advantage of if he's serious about contending.

• As for the moral of this long story - because he finally was able to marry the ball striking and the short game and the putting, we didn't have to hear him say, "This is the highest score I could have possibly shot today." That can be so tiresome. Actually, a reporter tried to walk him down that path. Tiger was literally asked, "Were you pleased with the 65? Might have been the highest you could have shot today." His response: "I was happy with it." I almost fainted, and it wasn't from the heat.