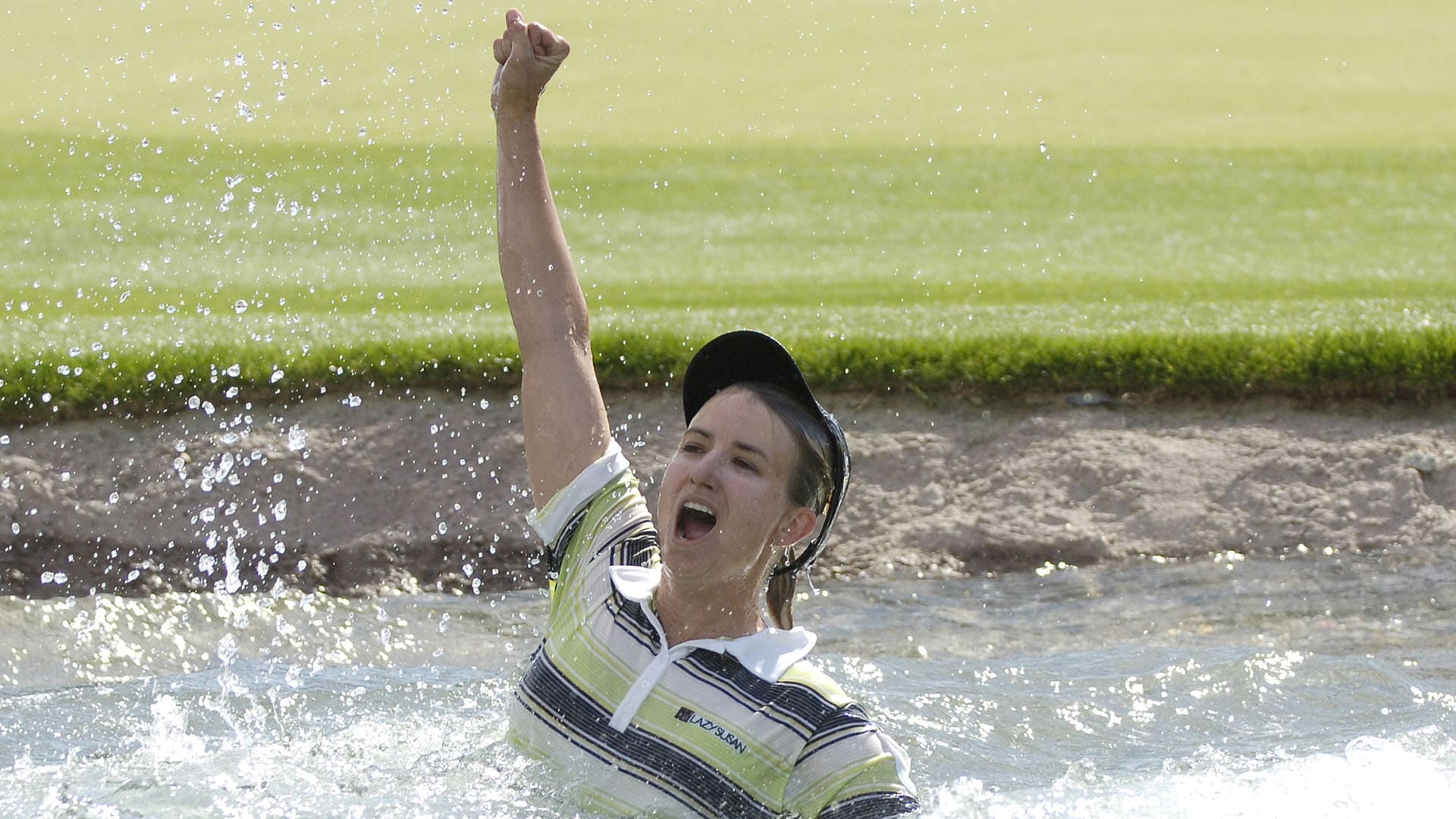 Players can’t fully see how their legacies may turn when they’re in the moment.

Time and reflection bring that larger meaning to their lives.

We’re calling them “Turning Points,” and our series turns now to three Hall of Famers who combined to win 105 LPGA titles.

Karrie Webb, Beth Daniel and Pat Bradley all won majors, Player of the Year awards and Vare trophies as dominant figures in their time.

They each enjoyed runs of dominance propelled by moments even they didn’t always see coming.

“Big doors swing on small hinges,” W. Clement Stone once said. It’s our theme in this series. He was a businessman and philanthropist before dying at 100 years old in 2002. He could have been a sports psychologist, too, in his understanding of what a moment can grow into.

Here are some of the hinges that opened doors for Webb, Daniel and Bradley . . .

As a 19-year-old Australian amateur standout, Webb didn’t know how she would fare when she turned pro late in 1994 to go test herself on international stages in the United States and Europe.

Leaving the rural, sugar-cane region that was her home growing up in Ayr, she knew she needed to find some level of success quickly. She knew time wasn’t on her side as she ventured out to sample developmental tour life in Florida and then the Ladies European Tour. She was funding her travel with money borrowed from family.

Outside Webb’s Aussie homeland, nobody knew much about her.

That changed in head-spinning fashion.

Webb met the LPGA’s criteria for the Hall of Fame when she was 25. She was inducted when she was 30. She said she surpassed her “wildest dreams” winning 41 LPGA titles, seven major championships, three Vare trophies for low scoring average and two Player of the Year awards.

There were so many pivotal moments and shots in Webb’s rise to stardom, but she remembers the rejuvenation she experienced in a big victory when she was 31 as a particularly meaningful turning point, a change in the way she experienced life on tour.

The Shot: It’s one of the most famous shots under pressure in the history of major championship golf. It’s Webb’s hole out at the 72nd hole of the ’06 Kraft Nabisco Championship, a 116-yard wedge that she knocked in for eagle. She was one stroke off the lead standing over that shot, and her reaction to sinking it spoke volumes. She was as exuberant as her peers have ever seen her. She leaped into her caddie’s arms and high-fived the gallery all the way to the hole. The shot ended up propelling her into a playoff, where she defeated Lorena Ochoa. It was the last of Webb’s seven majors. Only six other players in the history of women’s golf have won more.

In Her Words: “I already had a career by then. I was 31, but it was a turning point more because of how I felt, mentally, about my game at the time. The November before, I had been inducted into the World Golf Hall of Fame and the LPGA Hall of Fame, but 2005 was the first year in my career that I hadn’t won on the LPGA. I think I was, perhaps, trying to prove why I was in the Hall of Fame, even though I had already proved it.

“I was struggling, putting in work, but not getting anywhere. So, that celebration, it was really a release of a lot of tension, personally and professionally. That really changed my mindset going forward. I went on to have one of the best years of my career, and I really appreciated every win a lot more than I ever did prior to that.”

Webb gave herself a lot to appreciate, winning 10 more LPGA titles after taking the Kraft Nabisco trophy in ‘06. She won five times overall that year.

After a dominant amateur run, Daniel went on to win 33 LPGA titles, three Player of the Year awards, three Vare Trophies and a major championship. But her pro career didn’t begin the way she hoped in 1979, with expectations so high. She was a power player, an intimidating presence in stature and aura. She had won two U.S. Women’s Amateurs and helped Furman win an NCAA Championship. So, there was considerable hype as she joined the LPGA a year after Nancy Lopez made such a sensational rookie debut.

“If you think Nancy Lopez is great, wait until you see Beth Daniel,” the great Mickey Wright told media.

Though Wright’s comment was made with the best intention, it elevated the pressure. Daniel found herself growing impatient as summer approached. She headed to play the World Ladies Championship on the Japan LPGA Tour eager to win.

The Shot: In the final round of the World Ladies Championship, a major on the Japanese women’s tour, Daniel stepped to the last hole knowing she would win her first professional title with a par. The closing hole was a long par 3. Even with Daniel’s length, she needed at least a 3-wood to reach. She blocked her tee shot into a greenside bunker, but that’s where her turning point arrived. She faced a testy 60-foot bunker shot to an elevated green, with a right-to-left slope adding to the difficulty. She couldn’t see the hole, just the top half of the flagstick, but she knew the shot that was required. She opened the blade of her sand wedge and took a confident swipe, lofting a high, soft shot to within 3 feet of the hole. She made the putt.

In Her Words: “It was a huge turning point, because it gave me the confidence to know I could win as a pro, not just compete. I went on to play much, much better after that.” Daniel won her first LPGA title three months later and claimed Rookie of the Year honors. She followed that up winning four LPGA titles her second season, beating out Lopez, Donna Caponi, Joanne Carner and Amy Alcott for Player of the Year honors.

Going to the U.S. Women’s Open at La Grange Country Club outside Chicago in 1981, Bradley wasn’t yet among the elite stars of the women’s game. She was 30, and even with eight LPGA titles, including one major (the Peter Jackson Classic, which became the du Maurier Classic), she wasn’t yet in the same class with the superstars of that golden era of the game. “It was little country bumpkin me against the titans,” Bradley said.

The final round began with Bradley three shots behind the leader, Kathy Whitworth, who at 41 was pushing hard to claim what felt as if it might be her last best chance to finally win a U.S. Women’s Open. Bradley was paired with Beth Daniel, who was two behind Whitworth at day’s start. By round’s end, Whitworth had faded, leaving the championship as a duel between Bradley and Daniel.

A shot ahead going to the final hole, Bradley laid up at the par 5, with Daniel pulling her second shot just left, missing her bid to reach the green in two.

After that layup at the last, Bradley curiously found herself 70 yards from the hole, less than a full wedge to her target, the kind of shot that she never really felt comfortable over before making her wedge play and short game a priority that season. Bradley couldn’t believe she left herself with this yardage with so much at stake, but what happened next was the turning point that elevated her confidence to a new level. She carved the delicate shot to 2 feet, which set up her clinching birdie. It didn’t come without a scare, though. Daniel almost holed her pitch for eagle, leaving it hanging on the lip before Bradley putted out for her first U.S Women’s Open title. She went on to win 22 more times in her 30s and 40s, claiming three of her six total majors in 1986.

In Her Words: “I had sought out this short-game guru named Shelby Futch from Northbrook Country Club in Chicago, and we had been working on this exact shot, from this exact distance, 70 yards out. So, I’m thinking, 'Wow, I’ve been working on this, I’ve been practicing this, I’ve been thinking about this.’ For this shot to come in the final round like this, on the 72nd hole, it was an amazing moment. Winning like that catapulted me to another level in the world of golf.

“The other thing about it, I had never won a USGA event growing up. I hardly played in any. I played in one U.S. Junior, one U.S. Women’s Amateur and never played in the Curtis Cup, but this is what you dreamed about growing up. Winning it meant so much to me, because it made me a part of the USGA’s family of champions. Being part of that family is so special to me to this day. That shot got me into that family.” 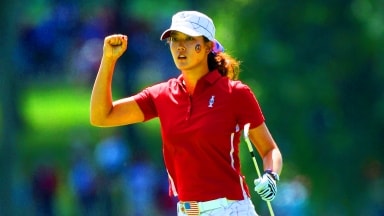