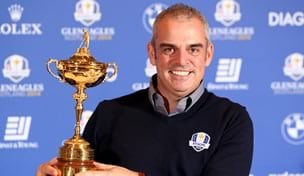 As every fan of the United States team has understood for the past couple decades, the Ryder Cup isn’t played on paper. If it was, the stars and stripes would likely have a few more wins, its roster biennially displaying better talent top-to-bottom than its European counterpart until just recently.

Then again, in today’s digital age, no games are played on paper anymore. An entire generation will forever believe that crossword puzzles were invented on an iPad. Instead, games are now played in cyberspace, with social media serving as the arena in which every person either competes or spectates.

What it means is that even the old joke about games being played on paper is not only still untrue, but equally untimely. Such competitions will now be played on Twitter, along with just about everything else in the world.

OK, so maybe not the swings and putts and jangling of coins gamesmanship, but at least part of Samuel Ryder’s vision from long ago is being played out on computer screens and phones around the world.

Don’t believe it? Then you clearly haven’t checked your timeline lately.

After all, Twitter could serve to explain just why the European Tour’s Tournament Committee named Paul McGinley on Tuesday as its next captain for the 2014 Ryder Cup – and just as importantly, why it didn’t choose anybody else.

In the 48 hours prior to the announcement, three members of Europe’s team – the three most vital members of the team, it could be argued – publicly voiced their support for McGinley through social media.

First it was Rory McIlroy, who without naming names clearly disapproved of Colin Montgomerie getting a second turn in the skipper’s seat:

“RC captaincy should be a 1 time thing... Everybody deserving gets their chance and moves on... Would love to play under Paul McGinley in '14”

Luke Donald then followed by throwing his weight in the same direction:

“I hope Paul McGinley gets his chance, he's been an amazing Vice Captain and deserves an opportunity #2014RyderCup”

And in response to that tweet, Ian Poulter sounded off:

“Darren has taken his name out of the running for Ryder cup captaincy. It would be fantastic to have Paul Mcginley as the 2014 captain.”

Individually, none of these three players – not the No. 1 player in the world, nor the No. 3, nor the one who was the unanimous man of the match at last year’s edition of the event – wields enough power to persuade the committee to choose his man over all other contenders. Even collectively, they must understand that while their opinions may help rock the vote, they only comprise a small state in this Electoral College.

So how did they get their way? Why did their words even matter?

Whether it was a calculated maneuver to sway the resolution or an innocent statement of opinion, it should be noted that McIlroy, Donald and Poulter chose not to make their feelings known behind closed doors – well, at least not only behind closed doors – but instead went public with them in the most obvious way. These weren’t words sought by media or uttered during a practice round. They were carefully typed out and distributed worldwide, public messages to those meeting privately about the next captain.

Sure, others have voiced support for McGinley, as well – Graeme McDowell and Justin Rose, to name a few – but answering a question is different than going out of your way to make intentions known to the entire world, especially in the waning moments before such a decision is being made.

Of course, it wasn’t so much what they said as what they didn’t say that really mattered.

By supporting McGinley, all three were in effect voting against Monty, who by all accounts was the next closest competitor in the race for the position. For a team with such strong ties, one which has prided itself in teamwork and camaraderie over the years, beginning the two-year journey to retain the title in controversial style wouldn’t have been conducive to achieving the end result.

Going against the wishes of three players could serve as potentially combustible, possibly causing a rift when each is being asked endlessly about playing for a man he didn’t want in the position in the first place. Meanwhile, the second guessing wouldn’t cease until after Europe retained the hardware – and if the team didn’t, then it probably never would.

That’s not to suggest that McGinley was the “safe” pick, but there were certainly fewer pratfalls than opting for a man who wasn’t wanted by important members of the team.

Even McGinley acknowledged that social media may have played a pivotal role in his appointment.

Upon being named to the position, he admitted: 'One thing I have learned from this is the power of Twitter.'

The next Ryder Cup – just like each before it – won’t be played on paper. It may not be contested in the grand expanse of cyberspace necessarily, either, but there’s little doubt it played some factor in the selection of one captain. With just a few keystrokes, McIlroy, Donald and Poulter may have ensured that they got their wish for 2014, whether that was part of their plan or not.