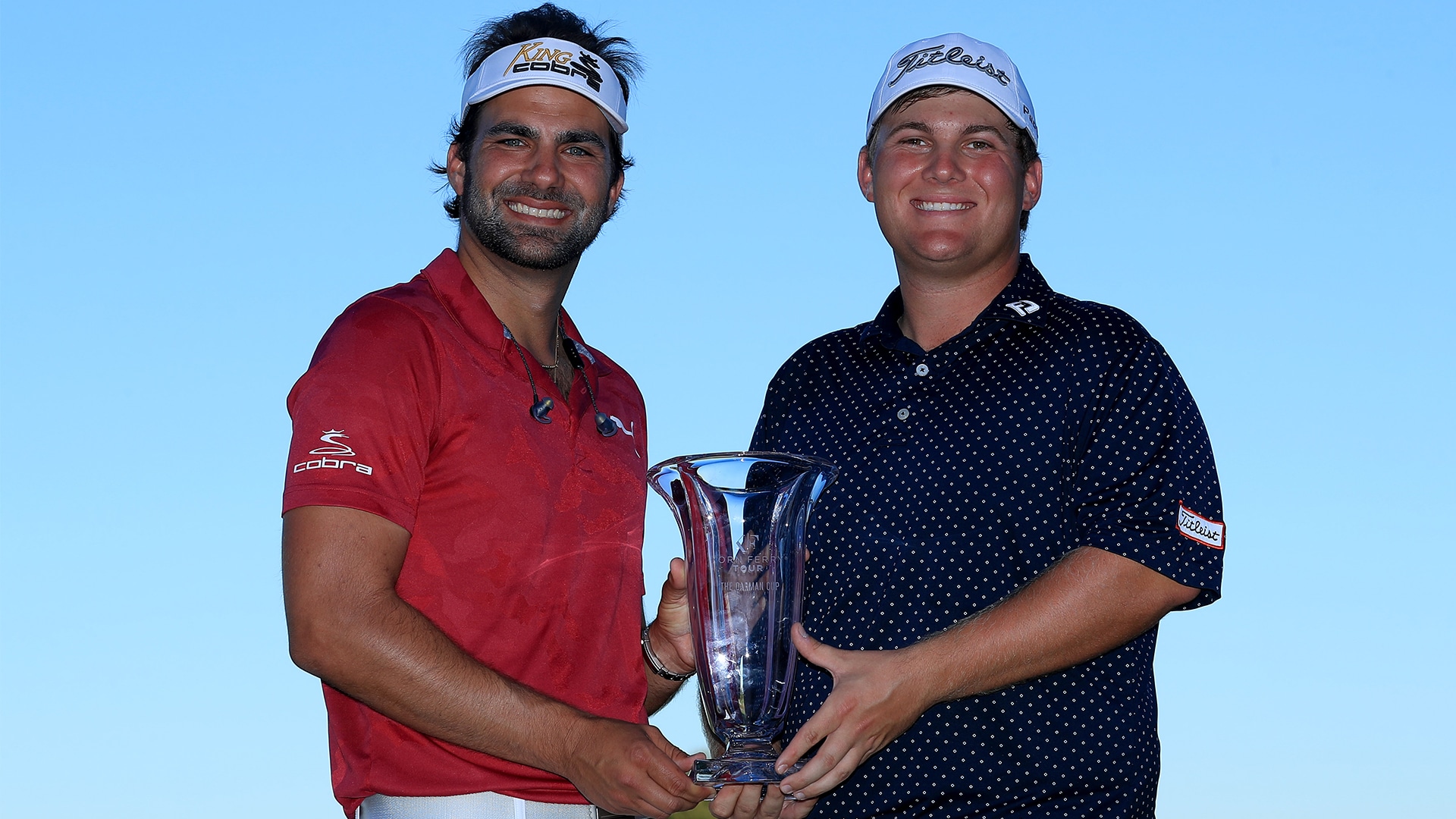 WINTER GARDEN, Fla. – The two most significant putts of Korn Ferry Tour Q-School’s final stage were struck within moments of each other, on two different holes, on two separate courses.

As Curtis Thompson drained a closing 25-foot birdie putt Sunday afternoon on Orange County National’s Crooked Cat course to tie Braden Thornberry for medalist honors and fully exempt status for the 2020 season, over on the Panther Lake course’s par-5 18th hole, Zach Zaback had just sank a 5-footer for birdie to shake things up further down the leaderboard.

But the 25-year-old Connecticut product, who has just two career KFT starts to his credit, wanted to finish strong.

“That almost gave me a little more motivation to make birdie,” Zaback said. “It definitely felt good to make it.”

“Nothing I could do. I did the best I could,” said Eaton, who is undecided whether he will return to school this spring. “I know I’ll still have good status, so if I can get quite a few starts guaranteed, then I probably will go pro.”

A year ago, Thornberry was in a similar position as Eaton. After earning conditional status as an amateur at final stage, the 2017 NCAA individual champion opted to forego his final semester at Ole Miss and ended up making 14 starts last season, finishing No. 101 on the money list and booking a return ticket to Q-School.

“This year I didn’t have a fallback plan like I did last year, but I think it was easier because this year there was no alternative,” Thornberry said. “My focus was totally here. If I finished last, I’m a pro and I have to deal with it, take conditional status and do Mondays.”

Luckily for Thornberry, he won’t have to worry about Plan B. The 22-year-old from Olive Branch, Mississippi, fired three rounds of 65 this week, including a 7-under 65 Sunday at Crooked Cat that included a front-nine, 7-under 29.

Neither will Thompson, whose birdie at the par-4 finishing hole earned him full playing privileges. The 27-year-old former LSU standout played three straight seasons with 20 or more starts on the KFT after leaving school early, but he didn’t make a single start this past season as he grinded on the mini-tours and spent time earlier this year caddying for his sister, Lexi Thompson, on the LPGA.

"After first Stage last year, I shot 14 under and missed, and I was ready to be done," Thompson said.

Now, he's anything but done.

“I thought there was a playoff,” Thompson said. “But I’ll take it, I don’t mind sharing the full status. That’s huge. You don’t have to worry about much and you can go free-wheel it.”

While even players with conditional membership can secure a handful of starts early and turn those opportunities into better priority status, it’s not ideal. Thornberry knows firsthand because last season he made just four starts before June, then tied for fifth in Springfield, Illinois, and next thing he knew he was wrapping up the season in Portland playing his 10th straight week.

“At the time I didn’t think I was that tired, but I was hitting just uncharacteristically bad shots – chunking shots, not even bad shots, just horrible,” said Thornberry, who missed three of his last four cuts. “I realized it was just like mentally fatiguing, not even so much physical but more of just the drain of going through the motions. … Being on the road, having to do laundry over and over. It will be nice now to plan my schedule out, play three or four in a row and then take a little breather. I think it will be a lot better for my golf game.”

Among the group finishing in the top 10 and earning 12 guaranteed starts were former Illinois star Nick Hardy (T-5), Liberty alum Mickey DeMorat (T-5) and Lipscomb product Dawson Armstrong, who played his last five holes in 5 under to shoot 7-under 65 and tie for seventh.