Tyler Strafaci vs. Aman Gupta, an unexpected U.S. Amateur semifinal – and here's why 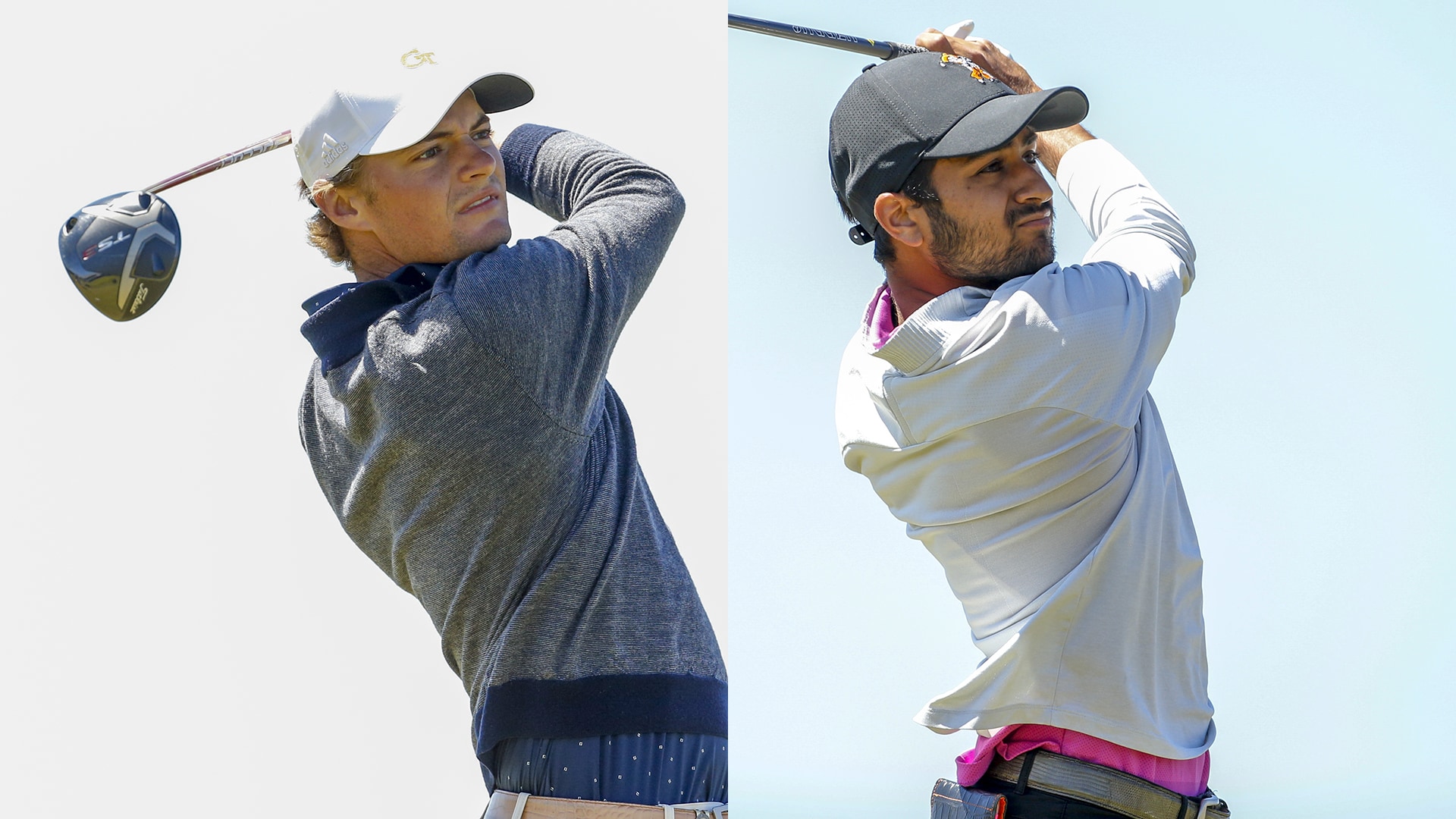 BANDON, Ore. – Tyler Strafaci had no plans to play this U.S. Amateur.

Aman Gupta had almost no chance.

But as fate would have it, they will meet in Saturday’s semifinals at Bandon Dunes.

Gupta, a Concord, N.C., native entering his junior year at Oklahoma State, had more than 20 alternates ahead of him last week and didn’t get into the field until the Friday afternoon before the championship. Now, he’s one of four players remaining after a hard-fought quarterfinal win over incoming Stanford freshman Michael Thorbjornsen.

“It’s nerve-racking, honestly,” Gupta said. “You just kind of have that heavy feeling in your chest, just waiting to get in.”

Gupta arrived in Bandon on Thursday evening after a long travel day that included connections in Atlanta and Seattle, plus a two-and-a-half-hour drive from Eugene. He got word the next day that he would be replacing world No. 2 Ricky Castillo and proceeded to set the Bandon Trails course record with a stress-free 64 on Monday.

Friday’s match, though, was more of what Gupta described as a “dogfight,” beginning with a Thorbjornsen chip-in for birdie and only getting more hectic.

At the third hole, Gupta yanked a drive into the left hay and needed four hacks just to advance the ball. “That deserves some applause!” quipped Gupta’s caddie, Oklahoma State head coach Alan Bratton, after Gupta finally found the fairway.

Added the self-deprecating Gupta, who conceded the hole while laying six: “I’m over there weed whacking for five minutes. … I thought I was going to be there all day.”

Then there was the mis-club at the par-3 12th, where Gupta’s tee ball sailed the green, only for Gupta to somehow escape with bogey to remain 1 down.

“I let him down there,” Bratton said. “But when he made that putt for bogey, he took the momentum right there.”

Gupta birdied his next two holes to tie the match for the third different time. In all, there would be five different lead changes in a match that included three holes halved with birdies and two won with bogeys. When the dust settled, it was Gupta tapping in for par at the last to finish off a 1-up victory.

One more win would earn Gupta exemptions into next year's U.S. Open and Masters, and a final date Sunday with either Ollie Osborne or Matthew Sharpstene. Two would make him the sixth Cowboy to lift the Havemeyer Trophy.

How about that potential haul for an alternate?

“I'm actually pretty comfortable out here,” said Gupta, who is ranked No. 500 in the World Amateur Golf Ranking. “It's just I didn't have the year I wanted to, I wasn't quite ranked well enough, so that's why I was an alternate. But it's definitely a surreal feeling, regardless of any of that, just making it this far.”

When Strafaci woke up Friday morning, he was still trying to shake the emotion of Thursday’s shocking finish against Segundo Oliva Pinto, who lost after his caddie was penalized for testing sand in a bunker on the final hole.

“Yesterday was one of the weirdest days of my golfing life, the way it happened,” Strafaci said. “I knew Stew is one of the best amateurs in the world, and I knew I had to get over that quick, compartmentalize and forget about it and make what I did yesterday worth something.

“I told myself I had to play one of the best rounds of golf I've ever played, and I thought I did.”

Strafaci wasn’t perfect. He quickly fell 1 down after a bogey at the first hole and added four bogeys on the back nine to cough up a 2-up lead with five to play. But the stakes were high, the winds were higher, and as Strafaci contested, “I didn’t really miss a shot.”

He hit a beautiful tee ball to 5 feet at the difficult par-3 sixth to take his first lead, and he doubled that advantage after a 12-foot eagle make at the ninth. When he found himself tied with three holes to play, Strafaci made no mistakes, while Hagestad bogeyed the penultimate hole and then sent a driver-off-the-deck second shot into the right penalty area at the par-5 18th, making par when he needed birdie.

“He’s a stud,” Hagestad of Strafaci, “but I think what makes him a lot better than maybe other amateurs and collegiate golfers is he has an incredible level of maturity.”

Strafaci’s dad, Frank, who is on the bag this week, said his son has “always been the kid who has a vision of what he wants to do.”

Entering his senior season last fall, Strafaci planned on staying amateur after graduation. He would finish up his business degree, play a summer full of amateur tournaments and hope for that Walker Cup call next May. But last February, Strafaci had a change of heart. He had played well, posting three top-six finishes, but he was coming off a disastrous tournament in Puerto Rico and his world ranking was barely inside the top 100.

“I think I might turn pro,” Strafaci told his dad. “The Walker Cup has been a little too much pressure on me, and I kind of just want to get going with my life.”

Looking back on that moment, Strafaci admits, “That was just an excuse because I wasn't playing good golf.”

Then the coronavirus pandemic hit, canceling the Yellow Jackets’ season and affording Strafaci the option to return to school for an extra year. His course altered again, Strafaci remained amateur and reignited that Walker Cup dream. He captured the North and South Amateur, a tournament his late grandfather won twice, and followed with a victory at the Palmetto Amateur. He improved his ranking to No. 56.

And as he’s navigated his way through the match-play bracket, he’s done so under the watchful eye of U.S. Walker Cup captain Nathaniel Crosby, who followed Strafaci's final few holes Friday.

Strafaci was invited to the practice session in December 2018 but ultimately did not make last year’s 10-man squad for Royal Liverpool.

“To be honest, I wasn’t ready to play in it last year,” Strafaci said. “I wasn’t a good enough player, I didn’t deserve it, I didn’t play good enough golf. And this year, I’m on a track where I’m still probably on the outside looking in, but I’m on a better track than I was last year.”

A win Sunday, of course, would leave nothing to fate.