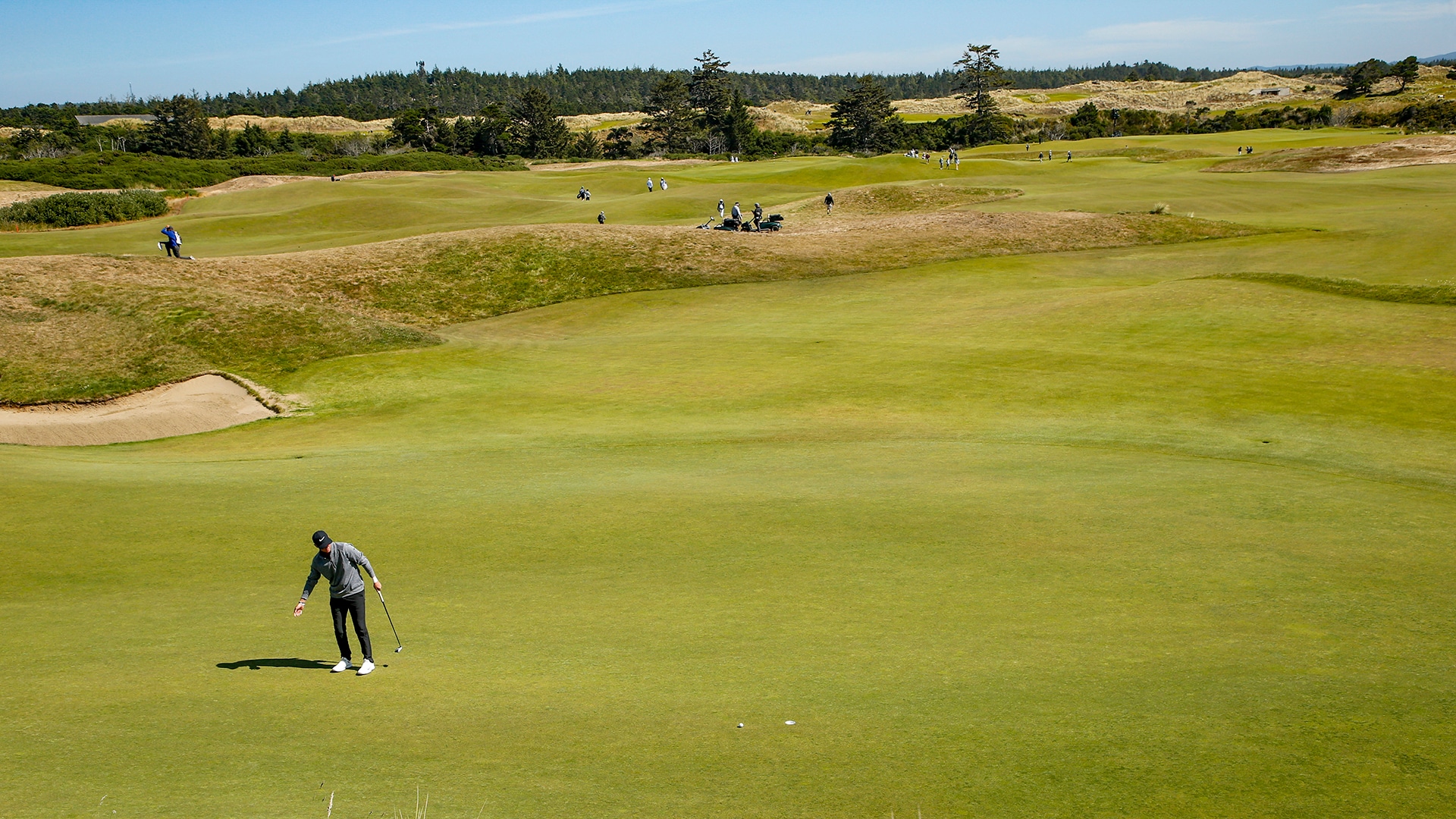 BANDON, Ore. – The bigger they are, the harder they fall.

Jonathan Yaun reminded himself of that when he saw his matchup for Wednesday’s Round of 64 at the U.S. Amateur. Yaun, a rising junior at Liberty who just a few months ago was barely ranked inside the top 500 in the World Amateur Golf Ranking, had to begin his match-play run against Georgia’s Davis Thompson, a first-team All-American and the highest-ranked amateur in the field at Bandon Dunes.

But his mentality quickly changed: I can beat this guy. And he did.

“It was a David and Goliath type of story,” Yaun said.

Yaun, who didn’t even get into this week’s field until last Wednesday, birdied four of his final five holes in a 3-and-1 victory over Thompson. It was one of two big-time upsets in the opening round of match play, as Charlotte’s Matthew Sharpstene also pulled off a shocker, sending reigning runner-up John Augenstein home early.

“I know he’s a really good player, one heck of a player, and I definitely felt like I was the underdog,” Sharpstene said. “But I’ve always had a chip on my shoulder, and I wanted to prove myself.”

At No. 394 in the world, Sharpstene is ranked 373 spots behind the Vanderbilt star, who led 2 up at the turn. The Charlotte native, who recently transferred from West Virginia, is used to being overshadowed. He was a good prep player, ranked 40th in his class and a three-time all-state selection, but he also wasn't even the most recruited player on the Hough High School team, which included several future Division-I players, most notably Arizona State's Blake Wagoner. (He finished his prep career at T.C. Roberson High.)

But after hitting a 2-iron to 10 feet and making birdie at the demanding par-4 11th hole to tie the match, the underdog showed he had some serious bite, even against a match-play bulldog in Augenstein, who was 19-6-1 in the format since Spring 2017.

When the TV cameras rolled in on the par-3 15th hole, Sharpstene, who had never played on live television before, made a quick bogey to lose his slim lead. But he got it right back with an up-and-down par at the par-4 16th, where Augenstein hit 3-iron over the green and followed with an equally poor chip. From there, two pars, on Nos. 17 and 18, sealed a 1-up victory for Sharpstene, as Augenstein missed a 15-footer that would’ve extended the match.

“The first match is sometimes the hardest one to get through because you’re trying to get momentum,” said Augenstein, who now turns his focus to the U.S. Open and Masters this fall. “I didn’t feel like I played bad today. He played well, I played well, just didn’t execute a few things. I hit all the shots down the stretch that I wanted to except for 16.”

Said Sharpstene: “I feel like I was a little nervous, but it was fun. I just proved to a lot of people that I can do this.”

Yaun’s breakout was perhaps less surprising because of how he’s played this summer. The highlight: a semifinal run at the North and South Amateur, where he shot 28 on the front nine at Pinehurst No. 2 before beating Rasmus Neergaard-Peterson in the quarterfinals, 9 and 8.

The shot-making down the stretch Wednesday was equally as good.

“It was literally a stripe show,” Yaun said.

At the par-3 15th, Thompson had to have been similarly awed, as Yaun hit a 5-iron to 3 feet at the ridiculously tough one-shotter. If he wasn’t, he certainly was at the next hole, when Yaun hit 3-wood onto the green at the short, downwind par-4 and made a 15-footer for birdie.

“Best shot I’ve hit in my life,” Yaun said. “I had hit three shots on the range that were identical to that, and I was like, ‘That’s what I’m going to do on 16.’ I had already, in my mind, prepared for that shot. I normally wouldn’t do that, but because of the contact and the strikes on the range, I memorized what I felt and I tried to hit it just the way I felt it.”

If Yaun had ever lacked confidence before, he didn’t after that shot. As soon as the ball left the club face, Yaun delivered a vicious club twirl that all but signaled the match was over.

Yaun won on the next hole after Thompson lipped out his 15-footer for birdie.

While arguably the two favorites entering match play are eliminated (No. 6 Sandy Scott of Texas Tech is now the highest-ranked player remaining after his 3-and-2 win over Tennessee's Brayden Garrison), Yaun and Sharpstene both live to see another day at Bandon Dunes. Yaun will face Oklahoma State’s Aman Gupta in the Round of 32 while Sharpstene gets Auburn’s Andrew Kozan.

If anything, both players will be well prepared thanks to their big scalps Wednesday.